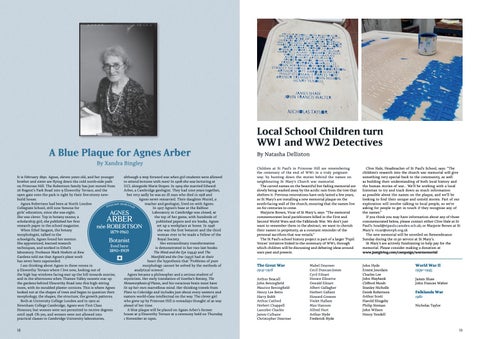 A Blue Plaque for Agnes Arber By Xandra Bingley although a step forward was when girl students were allowed It is February 1890. Agnes, eleven years old, and her younger to attend lectures with men! In 1908 she was lecturing at brother and sister are flying down the cold north-side path UCL alongside Marie Stopes. In 1909 she married Edward on Primrose Hill. The Robertson family has just moved from Arber, a Cambridge geologist. They had nine years together, 26 Regent’s Park Road into 9 Elsworthy Terrace, and the but very sadly he was an ill man who died in 1918 and open gate onto the park is right by their five-storey newAgnes never remarried. Their daughter Muriel, a build house. teacher and geologist, lived on with Agnes. Agnes Robertson had been at North London HERIT H S I L G AG EN E In 1927 Agnes’s base at the Balfour Collegiate School, still now famous for Laboratory in Cambridge was closed; at girls’ education, since she was eight. the top of her game, with hundreds of She was clever. Top in botany exams; a published papers and six books, Agnes scholarship girl; she published her first set up a workplace at home. In 1946 research paper in the school magazine. é she was the first botanist and the third When Ethel Sargant, the botany 1879-1960 woman ever to be made a Fellow of the morphologist, talked to the Royal Society. schoolgirls, Agnes found her mentor. Her extraordinary transformation She apprenticed, learned research lived here is demonstrated in her two last books: techniques, and worked in Ethel’s 1890–1909 The Mind and the Eye (1954) and The laboratory. Professor Mark Nesbitt at Kew Manifold and the One (1957) had at their Gardens told me that Agnes’s plant work heart the hypothesis that ‘Problems of pure has never been superseded. morphology cannot be solved by the methods of I am thinking about Agnes in these rooms in analytical science’. 9 Elsworthy Terrace where I live now, looking out of Agnes became a philosopher and a serious student of the high bay windows facing east up the hill towards sunrise, mysticism. Her early translation of Goethe’s Botany, The and in the afternoons when Thames Valley sunsets roar up Metamorphosis of Plants, and his voracious brain must have the gardens behind Elsworthy Road into this high sitting lit up her own marvellous mind. Her thinking travels from room, with its moulded plaster cornices. This is where Agnes Plato to Coleridge and includes just about every western and looked out at the shapes of trees and began to question their eastern world-class intellectual on the way. The clever girl morphology, the shapes, the structure, the growth patterns. who grew up by Primrose Hill is nowadays thought of as way Both at University College London and in 1902 at ahead of her time. Newnham College Cambridge, Agnes won First Class A blue plaque will be placed on Agnes Arber’s former Honours; but women were not permitted to receive degrees house at 9 Elsworthy Terrace at a ceremony held on Thursday until 1948. Oh yes, and women were not allowed into 1 November at 12pm. practical classes in Cambridge University laboratories,

Local School Children turn WW1 and WW2 Detectives By Natasha Delliston Children at St Paul’s in Primrose Hill are remembering the centenary of the end of WW1 in a truly poignant way: by hunting down the stories behind the names on neighbouring St Mary’s Church war memorial. The carved names on the beautiful but fading memorial are slowly being washed away by the acidic rain from the tree that shelters it. Previous renovations have only lasted a few years, so St Mary’s are installing a new memorial plaque on the south-facing wall of the church, ensuring that the names live on for centuries to come. Marjorie Brown, Vicar of St Mary’s, says: “The memorial commemorates local parishioners killed in the First and Second World Wars and the Falklands War. We don’t just want to remember them in the abstract, we want to cherish their names in perpetuity, as a constant reminder of the personal sacrifices that war entails.” The St Paul’s school history project is part of a larger ‘Pupil Voices’ initiative linked to the centenary of WW1, through which children will be discussing and debating ideas around wars past and present.

Clive Hale, Headteacher of St Paul’s School, says: “The children’s research into the church war memorial will give something very special back to the community, as well as building their understanding of both local history and the human stories of war… We’ll be working with a local historian to try and track down as much information as possible about the names on the plaque, and we’ll be looking to find their unique and untold stories. Part of our exploration will involve talking to local people, so we’re asking for people to get in touch if they recognise any of the names.” If you think you may have information about any of those commemorated below, please contact either Clive Hale at St Paul’s: head@stpauls.camden.sch.uk; or Marjorie Brown at St Mary’s: vicar@smvph.org.uk   The new memorial will be unveiled on Remembrance Sunday during the 10.30 service at St Mary’s. St Mary’s are actively fundraising to help pay for the memorial. Please consider making a donation at www.justgiving.com/campaign/warmemorial 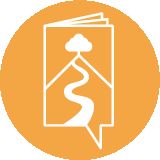 On The Hill Magazine