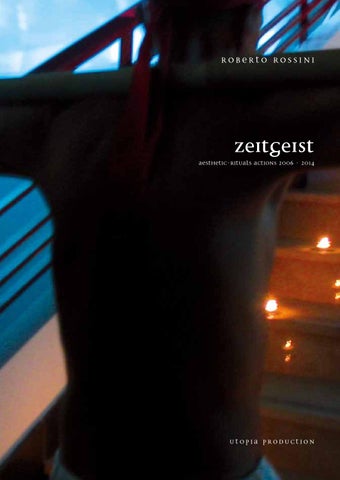 (the spirit of time) Is an â&amp;#x20AC;&amp;#x2DC;in progressâ&amp;#x20AC;&amp;#x2122; project, which began in 2006 and concluded in 2014: a reflection upon time, the passing of time and the time we live in. Is a instrument of the mind, an anti-technical technique that provides action with a mythical connotation and allows the poetic act to happen. Is the consciousness of matter as the realms of the fragmentary, the parcelledout, the discontinuous; it is a reparation ritual to the plague of the spectacle world; the materials used are chips of sign, parts of sense, traces of thought, shadows of meaning. Pursues the vision of a mythical, cyclical time where myth is meant to stop the flux of contemporary time. Is basically an emotional work; it is the gesture, the certainty of making poetry at a speed as close as possible to that of the human brain.

Biography Performer and visual artist, work from the mid-70s. He has participated in international festivals, with events staging in atypical areas such as industrial plants, historical buildings, religious temples and natural or defunctionalized environments. He deepened the anthropological roots of performative research by getting in touch with native cultures and through many seminars on corporal research. He realized video-art works dealing with the processes of the unconscious mind and given lectures and leaded workshops on the subjects of performance and multimedial communication. He has collaborated with the Museum of Contemporary Art Villa Croce in Genoa with performances, exhibitions and educational projects. He is a member of the Artistic Direction of Art Action International Performance Art Festival of Monza. Professor of Performance art at the Traditional Arts Institut - Museum of World Cultures of Genoa and Museum and Exhibition Design at Istituto Europeo di Design in Milan. Is co-founder of Albedo, cultural association for active imagination in Milan. In 2012 he published the book The performance: art, myth, ritual and play, edited by Utopia production, and in 2015 co-published Italian Performance Art, ed. Sagep. He currently works at Locus Solus - ritual aesthetic actions, an new performanceprogress project.

Rarely do you get the chance to write about your own biographical experience away from the descriptive ambitions of artwork. Ultimately, art and life appear to be close or distant, the evidence of their being independent from each other by virtue of their perspective point. Talking about the Zeitgeist project, therefore, makes it necessary to be free to choose this point, this punctum. It may be its poetical side, or the asymmetrical displacement of the performing process, or a life surge in a death world. The otherwise undecipherable places of our own inner experience become the pulsating centre of our interaction with the outside world. What does Zeitgeist mean? It’s a German word, made up of Zeit (time) and Geist (spirit), meaning “the spirit of times”, that is, the intellectual, moral and cultural climate that connote a certain historical period. This project arises from the need to evaluate our individual psychobiological consciousness of the social issues of our times. It is a never-ending project, a work about time, the passing of time and the time we live in. In Gilles Deleuze’s words: “We keep on remaking history, but actually it is history that keeps on being remade by each one of us, on our own body. What character would you like to have been, in what epoch would you like to have lived? Perhaps a plant, or a landscape?

And yet, this is what you are already: only, you fool yourselves in answering”. The subtle spirit of life is to be found in what is closer to us. It is the things we do and we suffer at home, in our flesh, our character, our personal history, that are most interesting. An artist always draws upon his own tragedies, his own pain, but my work is rather about the roots of suffering. The dual expressions of existence, good and evil, pleasure and pain, nature and nurture. Being there with all of one’s strength, feeling unbound and free within the Wholeness, being serenely lonely, being one’s own confidant. Material is what provides the idea, not the other way round. Encountering things has something surprising, almost upsetting, about it; like a sigh, sometimes a gasp, sometimes a faraway echo. In re-building my personal reality, I pick up images, objects, sheets of paper annotated with names and drawings of things. I collect significant fragments of my time. Fragmented, distinctive features that undoubtedly have a lot in common with memory. Made of “parts” of shapes and materials, places and images, and especially intentions. The autonomous life of things, which follow their own path in an original way. We only have time to trace the order of chaos. Life flows, dragging along energy that needs to be materialised and conden-

sed in order to be transformed. The idea as a function of transformation: this is what it’s all about, the symbolic in action. The symbolic is nurtured on a close and fertile relationship with the heritage of collective and personal memory, social environment, images of the representation of reality. The benchmark against which it is possible to assess the values of our existence. An uphill road, one step after the other, with a few stations. Crucis Way. Becoming and letting oneself become gesture, colour, light, shadow, time, material, noise, art… a reparation ritual to the plague of the spectacle world, made of chips of sign, parts of sense, traces of thought, shadows of meaning. A sort of contemporary iconostasis. Is this Zeitgeist? Or is it the umpteenth trap of a massed-up situation, a primeval soup turned upside down, where everything is ordered, everything is impossible? Very often I feel that an idea can be expressed by just one word, just one sound. Like density, loss, verticality, waste or dissolution, for example. But this is just a starting point, a grip to hold on to so as not to be devoured by the idea itself, a form that allows something to happen. The same as in life. Something to fill the emptiness, matter to fill the mould, to let the act happen. So, the performer’s proceeding along a track marks out the

space just like the possible signs of light created by a line of candles. The trajectory at stake. Art as the explicit wish and will to solve a conflict through action, whether spiritual, religious, political, personal, social or cultural. An intuition, a vision. The awareness of matter as the realms of the fragmentary, the parcelled-out, the discontinuous. The process of thinking out a figure, a figure coming to life. Our body, the only one that can reconnect us with nature and the symbolic order that rules us. There is a painting by Klee called Angelus Novus… an osmotic body. A “mystical” body. This is where the short circuit occurs. The condition of being indissolubly tied to our body, until death, allows us to envisage its transformation from body as matter to body as value. And then, time. Man has learnt from the sun to measure his own life. As T.S. Eliot put it: “We don’t know very much of the future, except that from generation to generation the same things happened again and again.” Stopping the flux of time. Breaking the rope, changing our skin. Only a madman can think of spinning the wheel that’s spinning him. Why is all this necessary? And why doesn’t all this affect just the aesthetic side of it? Does it perhaps interact with experiences involving other fields… anthropological, socioexistential fields? Issues such as

consciousness-expansion, spirituality, and liberation? My wing is ready to fly. Friedrich Nietzsche wrote: “…acting in an untimely way – that is, against time, and therefore over time and, let’s hope, in favour of the time to come”. Standing against the restlessness of the present, where the rituals of daily life unfold as compulsive, repetitive patterns. Where sounds, spaces, objects, words, and actions are freed of their relation with spirit and life. These in turn become just “things” that can feel and be felt. It is the space of the perceptible that we must act upon. First within ourselves, in our shadows and our absolute tensions. Establishing a contact with the world is a way of improving our self-awareness. A mirror game where everything has its own place, albeit temporary. Before dying, Rudolf Schwarzkogler wrote: “Everything is clear, I have the feeling I am a star among stars”. That’s why Zeitgeist is the obstinate, permanent open demonstration that forces us to pay our dues, to reveal our pretences, our infinite, endless ambiguity and cowardice. It is the gesture, the certainty of making poetry at a speed as close as possible to that of the human brain. Roberto Rossini 2008, january thanks to Pier Pietro Brunelli for the intuition of Crucis Way.

Performing a ritual means walking; rites and their executors, the traveler and the road, are one and the same thing: the traveler is the way that runs itself. There is no exit from the cycle of life, there is no exit from the cycle of history. Itâ&amp;#x20AC;&amp;#x2122;s on this background of understanding that stands the sense of interdependence: each individual can perform the rite, can be a celebrant. The whole life reveals its ritual character, regardless of how individual, mundane or revolutionary can be the archetypal world that appears. The rite of the performer is an enterprise in failure; it is a product that remains unsold - this is perhaps the real reason of the venture - and even when the product is marketable, the performer canâ&amp;#x20AC;&amp;#x2122;t gain anything: in the performance act there are no revenues, it immediately begins anew. Moment by moment, step by step, I do not go towards the liberation, that is placed there, beyond the prison: Iâ&amp;#x20AC;&amp;#x2122;m always here, and the here that has not elsewhere, the now that has no elsewhen are the seat, the time of my life, of my way. Roberto Rossini 2012, january

Zeitgeist 1 the dream of a time 2006 Urban Center Monza

The world already possesses the dream of a time whose consciousness it must now possess in order to actually live it. | Guy Debord |

Zeitgeist 5 the game of the Aeon 2007 Centro WhiteDove Genoa

As the child and the artist play, so the fire, eternally alive, plays building and destroying in full innocence. This is the game the Aeon plays with himself. | Friedrich Nietzsche |

Zeitgeist 8 the rabbit on the moon 2009 TeatroSelva Asti

Everything is clear, I have the feeling I am a star among stars. | Rudolf Schwarzkogler |

Life is made up of little fragments. | William S. Burroughs |

And if we live, we live to tread on kings. | William Shakespeare |

s beyo werious thernd thise knowthing is e is wo ano rld ther orde | An ton one r in A . r tau

We keep on remaking history, but actually it is history that keeps on being remade by each one of us, on our own body. What character would you like to have been, in what epoch would you like to have lived? Perhaps a plant, or a landscape? And yet, this is what you are already: only, you fool yourselves in answering. Gilles Deleuze

Performance art. Is a documentation of an ‘in progress’ performance project, by the italian artist Roberto Rossini, which began in 2006 and concluded in 2014. 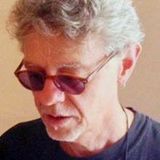