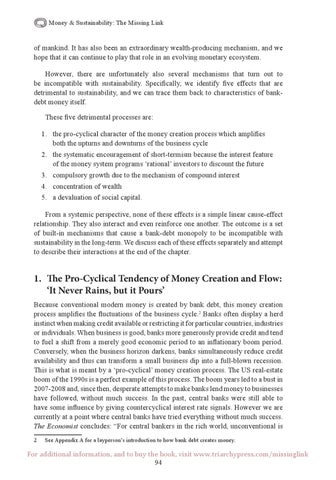 of mankind. It has also been an extraordinary wealth-producing mechanism, and we hope that it can continue to play that role in an evolving monetary ecosystem. However, there are unfortunately also several mechanisms that turn out to be incompatible with sustainability. Specifically, we identify five effects that are detrimental to sustainability, and we can trace them back to characteristics of bankdebt money itself. These five detrimental processes are: 1. the pro-cyclical character of the money creation process which amplifies both the upturns and downturns of the business cycle 2. the systematic encouragement of short-termism because the interest feature of the money system programs ‘rational’ investors to discount the future 3. compulsory growth due to the mechanism of compound interest 4. concentration of wealth 5. a devaluation of social capital. From a systemic perspective, none of these effects is a simple linear cause-effect relationship. They also interact and even reinforce one another. The outcome is a set of built-in mechanisms that cause a bank-debt monopoly to be incompatible with sustainability in the long-term. We discuss each of these effects separately and attempt to describe their interactions at the end of the chapter.

1. The Pro-Cyclical Tendency of Money Creation and Flow: ‘It Never Rains, but it Pours’ Because conventional modern money is created by bank debt, this money creation process amplifies the fluctuations of the business cycle.2 Banks often display a herd instinct when making credit available or restricting it for particular countries, industries or individuals. When business is good, banks more generously provide credit and tend to fuel a shift from a merely good economic period to an inflationary boom period. Conversely, when the business horizon darkens, banks simultaneously reduce credit availability and thus can transform a small business dip into a full-blown recession. This is what is meant by a ‘pro-cyclical’ money creation process. The US real-estate boom of the 1990s is a perfect example of this process. The boom years led to a bust in 2007-2008 and, since then, desperate attempts to make banks lend money to businesses have followed, without much success. In the past, central banks were still able to have some influence by giving countercyclical interest rate signals. However we are currently at a point where central banks have tried everything without much success. The Economist concludes: “For central bankers in the rich world, unconventional is 2

See Appendix A for a layperson’s introduction to how bank debt creates money.

For additional information, and to buy the book, visit www.triarchypress.com/missinglink 94

We tend to assume that we must have a single, monopolistic currency, funded through bank debt, enforced by a central bank. But we don’t need any such thing! In fact, the present system is outdated, brittle and unfit for purpose (witness the eurozone crisis). Like any other monoculture, it’s profitable at first but ultimately a recipe for economic and environmental disaster. The alternative is a monetary ‘ecosystem’, with complementary currencies alongside the conventional one.