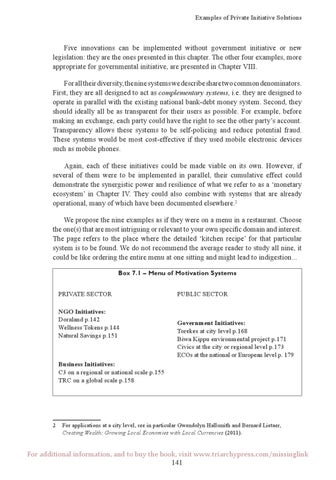 Five innovations can be implemented without government initiative or new legislation: they are the ones presented in this chapter. The other four examples, more appropriate for governmental initiative, are presented in Chapter VIII. For all their diversity, the nine systems we describe share two common denominators. First, they are all designed to act as complementary systems, i.e. they are designed to operate in parallel with the existing national bank-debt money system. Second, they should ideally all be as transparent for their users as possible. For example, before making an exchange, each party could have the right to see the other party’s account. Transparency allows these systems to be self-policing and reduce potential fraud. These systems would be most cost-effective if they used mobile electronic devices such as mobile phones. Again, each of these initiatives could be made viable on its own. However, if several of them were to be implemented in parallel, their cumulative effect could demonstrate the synergistic power and resilience of what we refer to as a ‘monetary ecosystem’ in Chapter IV. They could also combine with systems that are already operational, many of which have been documented elsewhere.2 We propose the nine examples as if they were on a menu in a restaurant. Choose the one(s) that are most intriguing or relevant to your own specific domain and interest. The page refers to the place where the detailed ‘kitchen recipe’ for that particular system is to be found. We do not recommend the average reader to study all nine, it could be like ordering the entire menu at one sitting and might lead to indigestion... Box 7.1 – Menu of Motivation Systems PRIVATE SECTOR NGO Initiatives: Doraland p.142 Wellness Tokens p.144 Natural Savings p.151

Business Initiatives: C3 on a regional or national scale p.155 TRC on a global scale p.158

For additional information, and to buy the book, visit www.triarchypress.com/missinglink 141

We tend to assume that we must have a single, monopolistic currency, funded through bank debt, enforced by a central bank. But we don’t need any such thing! In fact, the present system is outdated, brittle and unfit for purpose (witness the eurozone crisis). Like any other monoculture, it’s profitable at first but ultimately a recipe for economic and environmental disaster. The alternative is a monetary ‘ecosystem’, with complementary currencies alongside the conventional one.