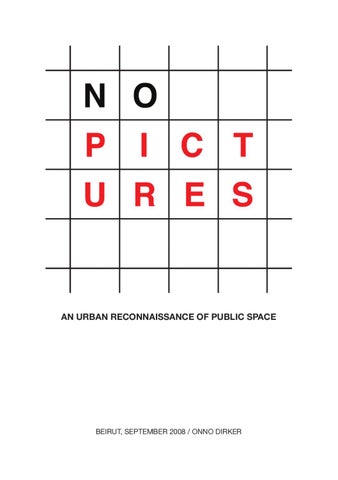 AN URBAN RECONNAISSANCE OF PUBLIC SPACE

On not taking pictures

The following account is part of a workshop called ‘Ruin of the city’ run by 98Weeks, a Beirut Arts Initiative. This is in turn part of their ongoing research project entitled ‘Every-Other-Day’. From the 22nd until the 28th of September 2008 I experienced for myself the city of Beirut. Exploring the city by foot, I ventured out, sometimes alone, sometimes accompanied by fellow participants of the project, some-times escorted by local guides. For an artist who’s main source of inspiration is drawn from an understanding of public space, just ‘walking around’ is an essential first step. I endeavour to approach my subject matter with an open mind, unfettered by preconceptions. This first step always surprises me. I forget everything that I learned at school in my geography lessons. Any edited news bulletin dished up on CNN and spoon fed to me as ‘fact’ is rendered meaningless when standing there, in that location, surrounded by that reality.

Unfortunately, the reality is that a curious nature is viewed with suspicion. I walk. I observe. I try to make sense of the place I find myself in. This process continues until it attracts the attention of a guard. During my wanderings in cities as diverse as Kaliningrad and Tbilisi, through London and even within my home town of The Hague my curiosity can provoke contempt. My intentions viewed upon with suspicion. Now in Beirut, the level of this suspicion is extreme. Trust is a life or death issue. Every corner of the city, every neighbourhood, every street, falls under the protection (or control) of some particular group. Public space is defined by its boundaries. By referring to ‘public space’ am I in fact guilty of a narrow preconception? Which ‘public’ do I mean? Does any ‘space’ as we in the west perceive it actually exist in such a fractured society? The social composition of Beirut is truly complex, a single week is clearly insufficient time to gain any real insight. One could live one’s entire life here and yet still be confounded by the experience. All I can offer is my own reaction to the city, my sense of place based on my limited experience in that place.

Beirut exhausted me. Never before have I been made so acutely aware of my surroundings. I crossed from one neighbourhood to the next, constantly setting foot in a new ‘other’ place. I remained ‘on high alert’, continuously questioned by guards of all persuasions, whether they be policemen, soldiers, militia-men, or just ‘the man’ on this or that street. I tried to grasp some broad understanding of the various cultural divisions that exist within the city, whether they be along ethnic, religious, political or class lines. Who’s who? Which area belong to which group? Etc. After several exhaustive days I concluded that this path of investigation would not lead me to any fuller understanding of the place. I realised that the pattern of segregation in Beirut is in itself a fundamental characteristic of the city. The sense of place is one of division. These divisions make up the homogeneity referred to as Beirut. It’s perhaps not something that one should try to conceptualise. It’s something that just ‘is’.

These divisions manifest on every street as flags, placards, banners, posters, signs and symbols. Portraits of one group’s victors are pasted on walls, as depictions of another group’s heroes wave as flags in the breeze. Glorious images of men with guns line the thoroughfares. Women are also depicted. These potraits attracted me with their alluring serenity. They suggested to me the devotional mother. These observations would require further analysis but for the purpose of this investigation I interpret all these portraits as the true signs of the city’s homogeneity, the real demarcation of space. Incidentally, there is no complete ‘map’ of Beirut. People navigate via martyrs, via events that have occurred, via memories. No wonder I attracted such curiosity.

The first time that my camera was ‘inspected’ occurred after I had just taken a picture of a Versace-girl advertisement on a billboard affixed alongside multiple posters of some fatherly figure, I guess a politician, covering a wall. The visual juxtaposition that appealed to me was clearly lost on an ‘unofficial’ security man. He notified the police who on taking my camera proceeded in deleting all the pictures I had taken that morning. The second time my pictures were deleted for some security non-reason proved more frustrating, as the particular memory stick was confiscated as well. My irritation was charged. Why this aggression towards me? What was the thing that I was not supposed to ‘record’ in this certain place? On reflection, why had I chosen to take a picture at this or that place anyway? The memory of the deleted image became far more interesting than those that where not deleted. My ‘no-picture!’ experiences became a point of departure into what ‘public space’ in present day Beirut actually means. I continued to take pictures, sometimes only to see if I could.

On not taking pictures

The third time I was told to delete a picture I decided on a new tactic. Instead of recording the image in the form of a photograph, I would write down what it was that compelled me to record the image in a notebook. Each time I would try to describe my response to the place in the forbidden picture. To facilitate this, I created a frame of 10 by 10 squares (in essence 100 pixels). Into this space I allowed myself to write words, thus creating my own framed ‘word-images’. However the suspicions towards me continued unabated. At some point I was asked to stop writing in my notebook by some policeman. I even spend some time sitting in the back seat of his police car. I was released some time later, further photos deleted, but with my notebook held firmly in my hand. Fifteen of these ‘word-images’ are reproduced in this publication.

Taken: 26.09.2008 Location: Alongside the Beirut river, motorway Ghabi District, some miles further, nearby the bridge to Borj Hammoud (to the Armenian quarter).