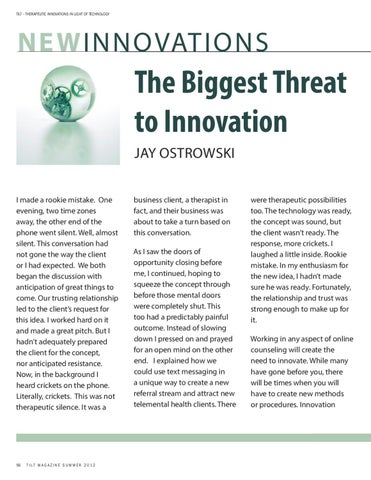 The Biggest Threat to Innovation Jay Ostrowski I made a rookie mistake. One evening, two time zones away, the other end of the phone went silent. Well, almost silent. This conversation had not gone the way the client or I had expected. We both began the discussion with anticipation of great things to come. Our trusting relationship led to the client’s request for this idea. I worked hard on it and made a great pitch. But I hadn’t adequately prepared the client for the concept, nor anticipated resistance. Now, in the background I heard crickets on the phone. Literally, crickets. This was not therapeutic silence. It was a

business client, a therapist in fact, and their business was about to take a turn based on this conversation. As I saw the doors of opportunity closing before me, I continued, hoping to squeeze the concept through before those mental doors were completely shut. This too had a predictably painful outcome. Instead of slowing down I pressed on and prayed for an open mind on the other end. I explained how we could use text messaging in a unique way to create a new referral stream and attract new telemental health clients. There

were therapeutic possibilities too. The technology was ready, the concept was sound, but the client wasn’t ready. The response, more crickets. I laughed a little inside. Rookie mistake. In my enthusiasm for the new idea, I hadn’t made sure he was ready. Fortunately, the relationship and trust was strong enough to make up for it. Working in any aspect of online counseling will create the need to innovate. While many have gone before you, there will be times when you will have to create new methods or procedures. Innovation

Therapeutic Innovations in Light of Technology is about envisioning therapeutic interventions in a new way. TILT magazine is published bi-monthly by the Online Therapy Institute. 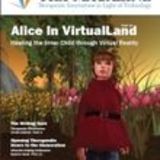