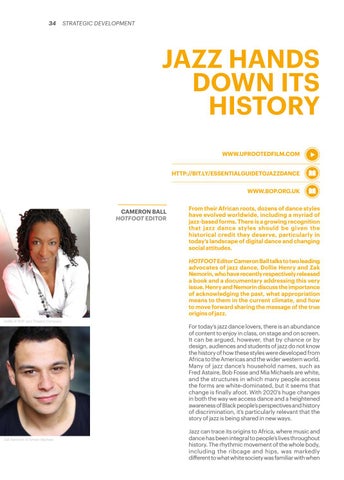 JAZZ HANDS DOWN ITS HISTORY &quot;THAT JAZZ DANCE HAS SURVIVED AND THRIVED AND CONTINUED TO REINVENT AS AN ART FORM IS TESTAMENT TO ITS INIMITABLE SPIRIT.&quot;

From their African roots, dozens of dance styles have evolved worldwide, including a myriad of jazz-based forms. There is a growing recognition that jazz dance styles should be given the historical credit they deserve, particularly in today’s landscape of digital dance and changing social attitudes. HOTFOOT Editor Cameron Ball talks to two leading advocates of jazz dance, Dollie Henry and Zak Nemorin, who have recently respectively released a book and a documentary addressing this very issue. Henry and Nemorin discuss the importance of acknowledging the past, what appropriation means to them in the current climate, and how to move forward sharing the message of the true origins of jazz.

For today’s jazz dance lovers, there is an abundance of content to enjoy in class, on stage and on screen. It can be argued, however, that by chance or by design, audiences and students of jazz do not know the history of how these styles were developed from Africa to the Americas and the wider western world. Many of jazz dance’s household names, such as Fred Astaire, Bob Fosse and Mia Michaels are white, and the structures in which many people access the forms are white-dominated, but it seems that change is finally afoot. With 2020’s huge changes in both the way we access dance and a heightened awareness of Black people’s perspectives and history of discrimination, it’s particularly relevant that the story of jazz is being shared in new ways. Jazz can trace its origins to Africa, where music and dance has been integral to people’s lives throughout history. The rhythmic movement of the whole body, including the ribcage and hips, was markedly different to what white society was familiar with when

enslaved people were brought to the Americas from the 16th to 19th centuries. This freedom of expression and physical aesthetic sets jazz apart from European stage and social dances, and, like the jazz music that accompanied the dances, the forms merged and new styles organically developed, both socially among Black people and more widely as entertainment (Augustyn et al, 2020). For example, on the stage, in the 19th century, ‘minstrel show’ performers developed tap dancing from a combination of Irish jigging, English clog dancing, and African rhythmic stamping (Willis et al, n.d.). A new documentary, Uprooted, charts the journey of jazz dance, telling its story and interviewing some leading figures in today’s jazz scene, from Mandy Moore, choreographer of La La Land, to hip hop historian and lecturer Moncell Durden, to Broadway icon Chita Rivera. Zak Nemorin, co-creator of the film, acknowledges this history: “We can only move forward if we understand where we came from. The world owes so much to the sharing of culture (especially Black cultures), but as Debbie Allen says so beautifully in our documentary, ‘The universe is built on change and if nothing changes, it is stagnant. It is not alive.’” Nemorin found the five-year journey of the awardwinning film development to be one of discovery, particularly on the topic of origin and appropriation;

“I found there is a difference between ‘migration’, where ideas, thoughts and, indeed, movement travels from one group of people or place in the world to another and gradually takes on the feel and ideas of the new environment, and ‘appropriation’ where a person or people claim others’ work or culture and call it their own. The interesting split between the two could be called “transmission”, where a constant respectful transaction of ideas can occur, and in my view, is the way we should all go about our creative lives.” One interviewee in the film documentary, Dollie Henry, has been a jazz dance artist and advocate for forty years. The London-based jazz dance artist, choreographer, director and lecturer is Founder and Artistic Director of Body of People Jazz Theatre Company, a.k.a. BOP, the only jazz theatre company in the UK. She is passionate about telling the true story of jazz. She has recently published a book, The Essential Guide to Jazz Dance, which gives an overview of the style’s multi-layered history, practices and development of the jazz dance idiom. Henry notes that “Jazz is its own unique artform which was developed through syncretism. Its lineage is rooted in the African creative tradition; it is an artform that is of a people for the people. As an inclusive artform it has clearly evolved and developed, reaching all corners of the globe and influencing many other artforms.”

The Autumn issue of HOTFOOT continues with the theme of Strategies for Change. It features voices from the sector to highlight perspectives on how they are coping professionally with the challenges that have come with the times. You may call it resilience, survival or self-care. What is clear is the passion that is helping us to surf the waves of change, to do what we do best for ourselves and for others. 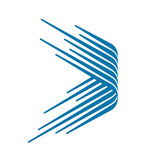 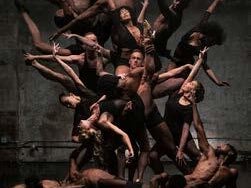 JAZZ HANDS DOWN ITS HISTORY 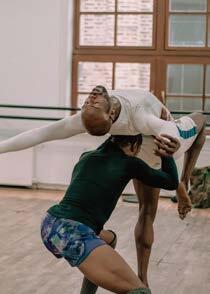