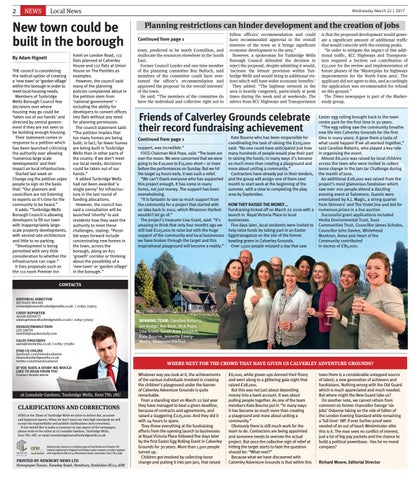 New town could be built in the borough By Adam Hignett THE council is considering the radical option of creating a ‘new town’ or ‘garden village’ within the borough in order to meet local housing needs. Members of Tunbridge Wells Borough Council fear decisions over where housing may go could be ‘taken out of our hands’ and directed by central government if they are not seen to be building enough housing. Their statement comes in response to a petition which has been launched criticising the authority over allowing ‘numerous large scale developments’ and their impact on local infrastructure. Started last week on Change.org the petition urges people to sign on the basis that: “Our planners and councillors are not listening to experts so it’s time for the community to be heard.” It adds: “Tunbridge Wells Borough Council is allowing developers to fill our town with inappropriately largescale property developments, with second rate architecture and little to no parking. “Development is being permitted with very little consideration to whether the infrastructure can cope.” It lists proposals such as the 110 room Premier Inn

hotel on London Road, 112 flats planned at Calverley House and 127 flats at Union House on The Pantiles as examples. However, the council said many of the planning policies complained about in the petition stem from ‘national government’ – including the ability for developers to convert offices into flats without any need for planning permission. The council statement said: “The petition implies that too many homes are being built; in fact, far fewer homes are being built in Tunbridge Wells than in other parts of the county. If we don’t meet our local needs, decisions could be taken out of our hands.” It added Tunbridge Wells had not been awarded ‘a single penny’ for infrastructure in the last round of funding allocations. However, the council has said a consultation will be launched ‘shortly’ to ask residents how they want the authority to meet these challenges, stating: “Possible ways forward include concentrating new homes in the town, across the borough, along an A21 ‘growth’ corridor or thinking about the possibility of a ‘new town’ or ‘garden village’ in the borough.”

Planning restrictions can hinder development and the creation of jobs Continued from page 1 town, predicted to be worth £10million, and reallocate the resources elsewhere in the South East. Former Council Leader and one time member of the planning committee Roy Bullock, said members of the committee could have overturned the officer’s recommendation and approved the proposal ‘in the overall interests’ of the town. He said: “The members of the committee do have the individual and collective right not to

follow officers’ recommendation and could have recommended approval in the overall interests of the town as it brings significant economic development to the area.” However, a spokesman for Tunbridge Wells Borough Council defended the decision to reject the proposal, despite admitting it would, ‘increase the leisure provision within Tunbridge Wells and would bring in additional visitors which will have wider economic benefits.’ They added: “The highway network in the area is heavily congested, particularly at peak times during the week and at weekends. The advice from KCC Highways and Transportation

Friends of Calverley Grounds celebrate their record fundraising achievement Continued from page 1 support, was incredible.” FOCG Chairman Nick Pope, said: “The team are over the moon. We were concerned that we were going to be £10,000 to £15,000 short – or more before the performances on Sunday. But we hit the target 24 hours early. It was such a relief. “We can’t thank everyone who has supported this project enough. It has come in many forms, not just money. The support has been overwhelming. “It is fantastic to see so much support from the community for a project that started with an idea back in 2012, which Rhiannon Harfoot wouldn’t let go of.” The project’s treasurer Lisa Grant, said: “It’s amazing to think that only four months ago we still had £125,000 to raise but with the huge support of the community and local businesses we have broken through the target and this inspirational playground will become a reality.”

Kate Bourne who has been responsible for coordinating the task of raising the £225,000 said: “No one could have anticipated just how many hundreds of people would play their part in raising the funds; in many ways it’s become so much more than creating a playground and more about uniting a community.” Contractors have already put in their tenders, and the group will assign one of them next month to start work at the beginning of the summer, with a view to completing the play area by September. HOW THEY RAISED THE MONEY… Fundraising kicked off on March 22 2016 with a launch in Royal Victoria Place to local businesses. Five days later, local residents were invited to help raise funds by taking part in an Easter Eggstravaganza on the site of the former bowling green in Calverley Grounds. Over 1,500 people enjoyed a day that saw

is that the proposed development would generate a significant amount of additional traffic that would coincide with the existing peaks. “In order to mitigate the impact of this additional traffic, KCC Highways and Transportation required a Section 106 contribution of £52,000 for the review and implementation of future phases of the ‘Masterplan for highways improvements for the North Farm area’. The applicant did not agree to this, and accordingly the application was recommended for refusal on this ground.” The Times newspaper is part of the Markerstudy group. Easter egg rolling brought back to the town centre park for the first time in 30 years. “The egg rolling saw the community breathe new life into Calverley Grounds for the first time in many years. It gave them a taste of what could happen if we all worked together,” said Caroline Roberts, who played a key role in organising the event. Almost £6,000 was raised by local children across the town who were invited to collect loose change in the Jam Jar Challenge during the month of June. An additional £28,000 was raised from the project’s most glamorous fundraiser which saw over 200 people attend a dazzling evening event at Salomons. Guests were entertained by A.J. Magic, a string quartet from Skinners’ and The Violet Jive and bid for numerous prizes in a live auction. Successful grant applications included Veolia Environmental Trust, Suez Communities Trust, Councillor James Scholes, Councillor John Davies, Whitehead Monkton, Aviva and Heart of the Community contributed in excess of £85,000.

CLARIFICATIONS AND CORRECTIONS HERE at the Times of Tunbridge Wells we strive to deliver fair, accurate and balanced reports. When we don’t meet our own high standards we will accept the responsibility and publish clarifications and corrections. If you would like to make a comment on any aspect of the newspaper, please write to the editor at 16 Lonsdale Gardens, Tunbridge Wells, Kent TN1 1NU, or email newsdesk@timesoftunbridgewells.co.uk

Markerstudy Leisure is a trading name of One Media and Creative UK Limited registered in England and Wales under company number 5398960 with registered office at 45 Westerham Road, Sevenoaks, Kent TN13 2QB.

WHERE NEXT FOR THE CROWD THAT HAVE GIVEN US CALVERLEY ADVENTURE GROUNDS? Whatever way you look at it, the achievements of the various individuals involved in creating the children’s playground under the banner of Calverley Adventure Grounds is quite remarkable. From a standing start on March 22 last year they have managed to beat a given deadline, because of contracts and agreements, and raised a staggering £225,000. And they did it with 24 hours to spare. They threw everything at the fundraising efforts from the opening launch to businesses at Royal Victoria Place followed five days later by the first Easter Egg Rolling Event in Calverley Grounds for 30 years. More than 1,500 people turned up. Children got involved by collecting loose change and putting it into jam jars, that raised

£6,000, while grown ups donned their finery and went along to a glittering gala night that raised £28,000. But this was not just about depositing money into a bank account. It was about pulling people together. As one of the team members Kate Bourne put it: “In many ways it has become so much more than creating a playground and more about uniting a community.” Obviously there is still much work for the team to do. Contractors are being appointed and someone needs to oversee the actual project. But once the collective sigh of relief at hitting the target starts to fade the question should be: “What next?” Because what we have discovered with Calverley Adventure Grounds is that within this

town there is a considerable untapped source of talent; a new generation of achievers and fundraisers. Nothing wrong with the Old Guard which is much appreciated and much needed. But where might the New Guard take us? On another note, we cannot refrain from comment on former chancellor George ‘six jobs’ Osborne taking on the role of Editor of the London Evening Standard while remaining a ‘full time’ MP. If ever further proof were needed of an out of touch Westminster elite this is it. The man sees no conflict of interest, just a lot of big pay packets and the chance to build a political powerbase. Has he no moral compass? Richard Moore, Editorial Director