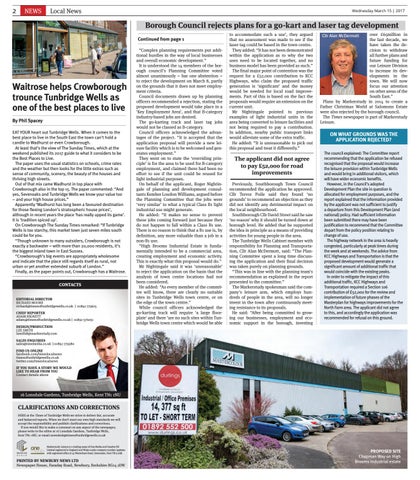 Waitrose helps Crowborough trounce Tunbridge Wells as one of the best places to live By Phil Spacey EAT YOUR heart out Tunbridge Wells. When it comes to the best place to live in the South East the town can’t hold a candle to Wadhurst or even Crowborough. At least that’s the view of The Sunday Times, which at the weekend published its 2017 guide to what it considers to be the Best Places to Live. The paper uses the usual statistics on schools, crime rates and the weather but then looks for the little extras such as sense of community, scenery, the beauty of the houses and thriving high streets. Out of that mix came Wadhurst in top place with Crowborough also in the top 15. The paper commented: “And yes, Sevenoaks and Tunbridge Wells we know your value too – and your high house prices.” Apparently ‘Wadhurst has long been a favoured destination for those fleeing London’s stratospheric house prices’, although in recent years the place ‘has really upped its game’. It is ‘tradition spiced up’. On Crowborough The Sunday Times remarked: “If Tunbridge Wells is too starchy, this market town just seven miles south could be for you. “Though unknown to many outsiders, Crowborough is not exactly a backwater – with more than 20,000 residents, it’s the biggest inland town in East Sussex. “Crowborough’s big events are appropriately wholesome and indicate that the place still regards itself as rural, not urban or yet another extended suburb of London.” Finally, as the paper points out, Crowborough has a Waitrose. CONTACTS EDITORIAL DIRECTOR RICHARD MOORE richard@timesoftunbridgewells.co.uk | 01892 779615 CHIEF REPORTER ADAM HIGNETT adam@timesoftunbridgewells.co.uk | 01892 576051 DESIGN/PRODUCTION LEE SMITH lsmith8@markerstudy.com

“Complex planning requirements put additional hurdles in the way of local businesses and overall economic development.” It is understood the 14 members of the borough council’s Planning Committee voted almost unanimously – bar one abstention – to reject the development on March 8, partly on the grounds that it does not meet employment criteria. Council documents drawn up by planning officers recommended a rejection, stating the proposed development would take place in a ‘Key Employment Area’, and that B-category industry-based jobs are desired. The go-karting track and laser tag jobs would not be classed as B-category. Council officers acknowledged the advantages of the project. “It is accepted that the application proposal will provide a new leisure facility which is to be welcomed and generates employment.” They went on to state the ‘overriding principle’ is for the area to be used for B-category employment, and claimed there had been no effort to see if the unit could be reused for light industrial purposes. On behalf of the applicant, Roger Nightingale of planning and development consultants Kember Loudon Williams, argued before the Planning Committee that the jobs were ‘very similar’ to what a typical Class B1 light industrial use might generate. He added: “It makes no sense to prevent these jobs coming forward just because they do not happen to fall within a Class B1 use. There is no reason to think that a B1 use is, by definition, any more valuable than a job in a non-B1 use. “High Brooms Industrial Estate is fundamentally intended to be a commercial area, creating employment and economic activity. This is exactly what this proposal would do.” Mr Nightingale said it was ‘unreasonable’ to reject the application on the basis that the analysis of town centre locations had not been considered. He added: “As every member of the committee will know, there are clearly no suitable sites in Tunbridge Wells town centre, or on the edge of the town centre.” While council officers acknowledged the go-karting track will require ‘a large floorplate’ and there ‘are no such sites within Tunbridge Wells town centre which would be able

to accommodate such a use’, they argued that no assessment was made to see if the laser tag could be based in the town centre. They added: “It has not been demonstrated within the application as to why the two uses need to be located together, and no business model has been provided as such.” The final major point of contention was the request for a £52,000 contribution to KCC Highways, who claim the proposed traffic generation is ‘significant’ and the money would be needed for local road improvements. Part of this is based on the fact the proposals would require an extension on the current unit. Mr Nightingale pointed to previous examples of light industrial units in the area being converted to leisure facilities and not being required to pay a contribution. In addition, nearby public transport links would alleviate some of the extra traffic. He added: “It is unreasonable to pick out this proposal and treat it differently.”

The applicant did not agree to pay £52,000 for road improvements Previously, Southborough Town Council recommended the application be approved. Cllr Trevor Poile said they found ‘no grounds’ to recommend an objection as they did not identify any detrimental impact on the local neighbourhood. Southborough Cllr David Street said he saw ‘no reason’ why it should be turned down at borough level. He added that he supported the idea in principle as a means of providing activities for young people in the area. The Tunbridge Wells Cabinet member with responsibility for Planning and Transportation, Cllr Alan McDermott, said: “The Planning Committee spent a long time discussing the application and their final decision was taken purely on planning grounds. “This was in line with the planning team’s recommendation as explained in the report presented to the committee.” The Markerstudy spokesman said the company’s leisure arm, which employs hundreds of people in the area, will no longer invest in the town after continuously meeting resistance to its proposals. He said: “After being committed to growing our businesses, employment and economic support in the borough, investing

over £65million in the last decade, we have taken the decision to withdraw all further plans and future funding for our Leisure Division to increase its developments in the town. We will now focus our attention on other areas of the South East.” Plans by Markerstudy in 2014 to create a Father Christmas World at Salomons Estate were also rejected by the borough council. The Times newspaper is part of Markerstudy Leisure. Cllr Alan McDermott

ON WHAT GROUNDS WAS THE APPLICATION REJECTED? The council explained: The Committee report recommending that the application be refused recognised that the proposal would increase the leisure provision within Tunbridge Wells and would bring in additional visitors, which will have wider economic benefits. However, in the Council’s adopted Development Plan the site in question is allocated for employment purposes, and the report explained that the information provided by the applicant was not sufficient to justify a departure from this Development Plan (and national) policy. Had sufficient information been submitted there may have been justification to recommend that the Committee depart from the policy position relating to change of use. The highway network in the area is heavily congested, particularly at peak times during the week and at weekends. The advice from KCC Highways and Transportation is that the proposed development would generate a significant amount of additional traffic that would coincide with the existing peaks. In order to mitigate the impact of this additional traffic, KCC Highways and Transportation required a Section 106 contribution of £52,000 for the review and implementation of future phases of the Masterplan for highways improvements for the North Farm area. The applicant did not agree to this, and accordingly the application was recommended for refusal on this ground.

CLARIFICATIONS AND CORRECTIONS HERE at the Times of Tunbridge Wells we strive to deliver fair, accurate and balanced reports. When we don’t meet our own high standards we will accept the responsibility and publish clarifications and corrections. If you would like to make a comment on any aspect of the newspaper, please write to the editor at 16 Lonsdale Gardens, Tunbridge Wells, Kent TN1 1NU, or email newsdesk@timesoftunbridgewells.co.uk

Markerstudy Leisure is a trading name of One Media and Creative UK Limited registered in England and Wales under company number 5398960 with registered office at 45 Westerham Road, Sevenoaks, Kent TN13 2QB.