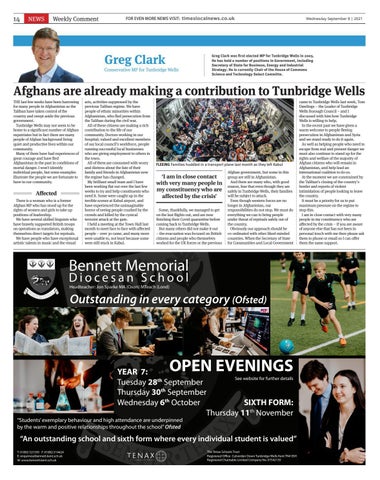 FOR EVEN MORE NEWS VISIT: timeslocalnews.co.uk

Greg Clark was first elected MP for Tunbridge Wells in 2005. He has held a number of positions in Government, including Secretary of State for Business, Energy and Industrial Strategy. He is currently Chair of the House of Commons Science and Technology Select Committe.

Afghans are already making a contribution to Tunbridge Wells THE last few weeks have been harrowing for many people in Afghanistan as the Taliban have taken control of the country and swept aside the previous government. Tunbridge Wells may not seem to be home to a significant number of Afghan expatriates but in fact there are many people of Afghan background living quiet and productive lives within our community. Many of them have had experiences of great courage and have fled Afghanistan in the past in conditions of mortal danger. I won’t identify individual people, but some examples illustrate the people we are fortunate to have in our community.

Affected There is a woman who is a former Afghan MP who has stood up for the rights of women and girls to take up positions of leadership. We have several skilled linguists who have bravely supported British troops on operations as translators, making themselves direct targets for reprisals. We have people who have exceptional artistic talents in music and the visual

arts, activities suppressed by the previous Taliban regime. We have people of ethnic minorities within Afghanistan, who fled persecution from the Taliban during the civil war. All of these citizens are making a rich contribution to the life of our community. Doctors working in our hospital; valued and excellent members of our local council’s workforce, people running successful local businesses who are giving employment to others in the town. All of them are consumed with worry and distress about the fate of their family and friends in Afghanistan now the regime has changed. My brilliant small team and I have been working flat out over the last few weeks to try and help constituents who need it. Some were caught up in the terrible scenes at Kabul airport, and have experienced the unimaginable horror of seeing people crushed by the crowds and killed by the cynical terrorist attack at the gate. I held a meeting at the Town Hall last month to meet face to face with affected people – over 30 came, and many more were unable to, not least because some were still stuck in Kabul.

‘I am in close contact with very many people in my constituency who are affected by the crisis’ Some, thankfully, we managed to get on the last flights out, and are now finishing their Covid quarantine before coming back to Tunbridge Wells. But many others did not make it out – the evacuation was focused on British citizens and people who themselves worked for the UK forces or the previous

Afghan government, but some in this group are still in Afghanistan. And there are many who, with good reason, fear that even though they are safely in Tunbridge Wells, their families will be subject to attack. Even though western forces are no longer in Afghanistan, our responsibilities do not stop. We must do everything we can to bring people under threat of reprisals safely out of the country. Obviously our approach should be co-ordinated with other liked-minded countries. When the Secretary of State for Communities and Local Government

came to Tunbridge Wells last week, Tom Dawlings – the Leader of Tunbridge Wells Borough Council – and I discussed with him how Tunbridge Wells is willing to help. In the recent past we have given a warm welcome to people fleeing persecution in Afghanistan and Syria and we stand ready to do it again. As well as helping people who need to escape from real and present danger we must also continue to stand up for the rights and welfare of the majority of Afghan citizens who will remain in Afghanistan, and help lead an international coalition to do so. At the moment we are constrained by the Taliban’s closing of the country’s border and reports of violent intimidation of people looking to leave the country. It must be a priority for us to put maximum pressure on the regime to stop this. I am in close contact with very many people in my constituency who are affected by the crisis – if you are aware of anyone else that has not been in personal touch with me then please ask them to phone or email so I can offer them the same support.

Outstanding in every category (Ofsted)