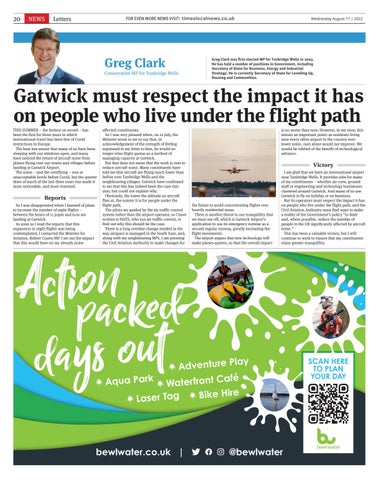 FOR EVEN MORE NEWS VISIT: timeslocalnews.co.uk

Gatwick must respect the impact it has on people who live under the flight path THIS SUMMER – the hottest on record – has been the first for three years in which international travel has been free of Covid restrictions in Europe. The heat has meant that many of us have been sleeping with our windows open, and many have noticed the return of aircraft noise from planes flying over our towns and villages before landing at Gatwick Airport. The noise – and the overflying – was at unacceptable levels before Covid, but the quieter skies of much of the last three years has made it more noticeable, and more resented.

Reports So I was disappointed when I learned of plans to increase the number of night flights – between the hours of 11.30pm and 6.00 am landing at Gatwick. As soon as I read the reports that this expansion in night flights was being contemplated, I contacted the Minister for Aviation, Robert Courts MP. I set out the impact that this would have on my already noise-

affected constituents. So I was very pleased when, on 22 July, the Minister wrote to me to say that, in acknowledgement of the strength of feeling expressed in my letter to him, he would no longer relax flight quotas as a method of managing capacity at Gatwick. But that does not mean that the work is over to reduce aircraft noise. Many constituents have told me that aircraft are flying much lower than before over Tunbridge Wells and the neighbouring villages. Gatwick have confirmed to me that this has indeed been the case this year, but could not explain why. Obviously, the lower the altitude an aircraft flies at, the noisier it is for people under the flight path. The pilots are guided by the air traffic control system rather than the airport operator, so I have written to NATS, who run air traffic control, to find out why this should be the case. There is a long overdue change needed in the way airspace is managed in the South East, and, along with my neighbouring MPs, I am pressing the Civil Aviation Authority to make changes for

is no worse than now. However, in my view, this misses an important point: as residents living near every other airport in the country everlower noise, ours alone would not improve. We would be robbed of the benefit of technological advance.

the future to avoid concentrating flights over heavily residential areas. There is another threat to our tranquillity that we must see off, which is Gatwick Airport’s application to use its emergency runway as a second regular runway, greatly increasing the flight movements. The airport argues that new technology will make planes quieter, so that the overall impact

I am glad that we have an international airport near Tunbridge Wells. It provides jobs for many of my constituents – whether air crew, ground staff or engineering and technology businesses clustered around Gatwick. And many of us use Gatwick to fly on holiday or on business. But its operators must respect the impact it has on people who live under the flight path, and the Civil Aviation Authority must find ways to make a reality of the Government’s policy “to limit and, where possible, reduce the number of people in the UK significantly affected by aircraft noise.” This has been a valuable victory, but I will continue to work to ensure that my constituents enjoy greater tranquillity.

SCAN HERE TO PLAN YOUR DAY 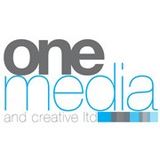 More from One Media