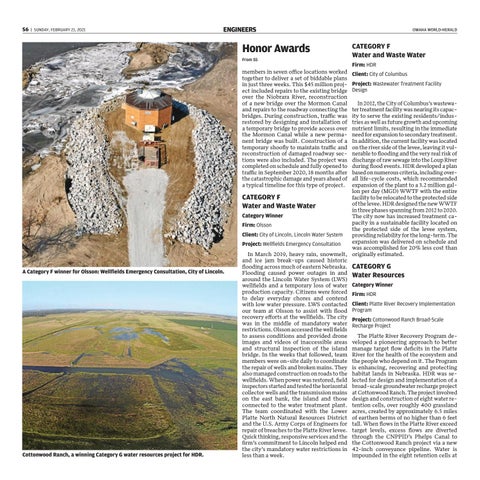 members in seven office locations worked together to deliver a set of biddable plans in just three weeks. This $45 million project included repairs to the existing bridge over the Niobrara River, reconstruction of a new bridge over the Mormon Canal and repairs to the roadway connecting the bridges. During construction, traffic was restored by designing and installation of a temporary bridge to provide access over the Mormon Canal while a new permanent bridge was built. Construction of a temporary shooﬂy to maintain traffic and reconstruction of damaged roadway sections were also included. The project was completed on schedule and fully opened to traffic in September 2020, 18 months after the catastrophic damage and years ahead of a typical timeline for this type of project.

In 2012, the City of Columbus’s wastewater treatment facility was nearing its capacity to serve the existing residents/industries as well as future growth and upcoming nutrient limits, resulting in the immediate need for expansion to secondary treatment. In addition, the current facility was located on the river side of the levee, leaving it vulnerable to ﬂooding and the very real risk of discharge of raw sewage into the Loup River during ﬂood events. HDR developed a plan based on numerous criteria, including overall life-cycle costs, which recommended expansion of the plant to a 3.2 million gallon per day (MGD) WWTF with the entire CATEGORY F facility to be relocated to the protected side of the levee. HDR designed the new WWTF Water and Waste Water in three phases spanning from 2012 to 2020. Category Winner The city now has increased treatment capacity in a sustainable facility located on Firm: Olsson the protected side of the levee system, Client: City of Lincoln, Lincoln Water System providing reliability for the long-term. The expansion was delivered on schedule and Project: Wellﬁelds emergency Consultation was accomplished for 20% less cost than In March 2019, heavy rain, snowmelt, originally estimated. and ice jam break-ups caused historic ﬂooding across much of eastern Nebraska. CATEGORY G Flooding caused power outages in and Water Resources around the Lincoln Water System (LWS) wellﬁelds and a temporary loss of water Category Winner production capacity. Citizens were forced Firm: Hdr to delay everyday chores and contend with low water pressure. LWS contacted Client: Platte river recovery Implementation our team at Olsson to assist with ﬂood Program recovery efforts at the wellﬁelds. The city Project: Cottonwood ranch broad-Scale was in the middle of mandatory water recharge Project restrictions. Olsson accessed the well ﬁelds to assess conditions and provided drone The Platte River Recovery Program deimages and videos of inaccessible areas veloped a pioneering approach to better and structural inspection of the island manage target ﬂow deﬁcits in the Platte bridge. In the weeks that followed, team River for the health of the ecosystem and members were on-site daily to coordinate the people who depend on it. The Program the repair of wells and broken mains. They is enhancing, recovering and protecting also managed construction on roads to the habitat lands in Nebraska. HDR was sewellﬁelds. When power was restored, ﬁeld lected for design and implementation of a inspectors started and tested the horizontal broad-scale groundwater recharge project collector wells and the transmission mains at Cottonwood Ranch. The project involved on the east bank, the island and those design and construction of eight water reconnected to the water treatment plant. tention cells, over roughly 400 grassland The team coordinated with the Lower acres, created by approximately 6.5 miles Platte North Natural Resources District of earthen berms of no higher than 6 feet and the U.S. Army Corps of Engineers for tall. When ﬂows in the Platte River exceed repair of breaches to the Platte River levee. target levels, excess ﬂows are diverted Quick thinking, responsive services and the through the CNPPID’s Phelps Canal to ﬁrm’s commitment to Lincoln helped end the Cottonwood Ranch project via a new the city’s mandatory water restrictions in 42-inch conveyance pipeline. Water is less than a week. impounded in the eight retention cells at 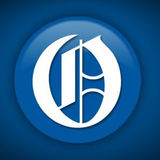 Engineers Week: Feb. 21-27 Each February, the American Council of Engineering Companies-Nebraska celebrates the innovation and creativity of...

Engineers Week: Feb. 21-27 Each February, the American Council of Engineering Companies-Nebraska celebrates the innovation and creativity of...