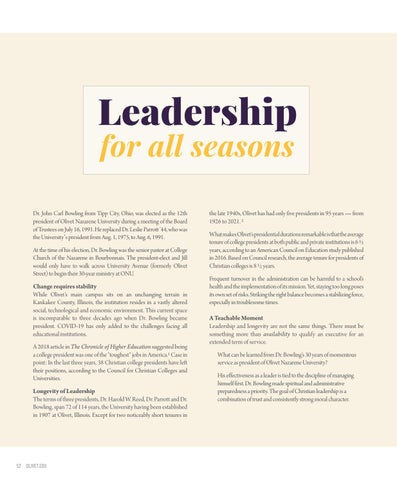 Leadership for all seasons

Dr. John Carl Bowling from Tipp City, Ohio, was elected as the 12th president of Olivet Nazarene University during a meeting of the Board of Trustees on July 16, 1991. He replaced Dr. Leslie Parrott ’44, who was the University’s president from Aug. 1, 1975, to Aug. 6, 1991. At the time of his election, Dr. Bowling was the senior pastor at College Church of the Nazarene in Bourbonnais. The president-elect and Jill would only have to walk across University Avenue (formerly Olivet Street) to begin their 30-year ministry at ONU. Change requires stability While Olivet’s main campus sits on an unchanging terrain in Kankakee County, Illinois, the institution resides in a vastly altered social, technological and economic environment. This current space is incomparable to three decades ago when Dr. Bowling became president. COVID-19 has only added to the challenges facing all educational institutions. A 2018 article in The Chronicle of Higher Education suggested being a college president was one of the “toughest” jobs in America.1 Case in point: In the last three years, 38 Christian college presidents have left their positions, according to the Council for Christian Colleges and Universities. Longevity of Leadership The terms of three presidents, Dr. Harold W. Reed, Dr. Parrott and Dr. Bowling, span 72 of 114 years, the University having been established in 1907 at Olivet, Illinois. Except for two noticeably short tenures in

the late 1940s, Olivet has had only five presidents in 95 years — from 1926 to 2021. 2 What makes Olivet’s presidential durations remarkable is that the average tenure of college presidents at both public and private institutions is 6 ½ years, according to an American Council on Education study published in 2016. Based on Council research, the average tenure for presidents of Christian colleges is 8 ½ years. Frequent turnover in the administration can be harmful to a school’s health and the implementation of its mission. Yet, staying too long poses its own set of risks. Striking the right balance becomes a stabilizing force, especially in troublesome times. A Teachable Moment Leadership and longevity are not the same things. There must be something more than availability to qualify an executive for an extended term of service. What can be learned from Dr. Bowling’s 30 years of momentous service as president of Olivet Nazarene University? His effectiveness as a leader is tied to the discipline of managing himself first. Dr. Bowling made spiritual and administrative preparedness a priority. The goal of Christian leadership is a combination of trust and consistently strong moral character. 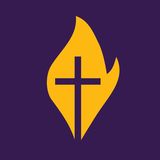 This is a special issue of Olivet The Magazine that represents a departure from our usual format. In recognition of the 30-year tenure of Dr...

This is a special issue of Olivet The Magazine that represents a departure from our usual format. In recognition of the 30-year tenure of Dr...