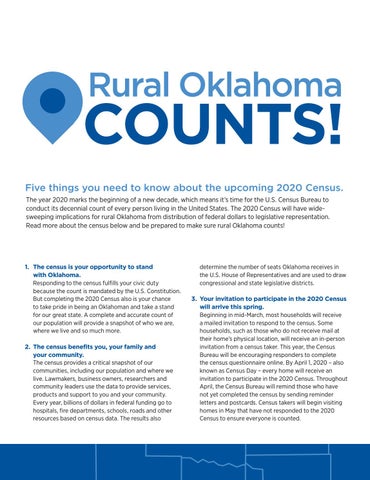 Five things you need to know about the upcoming 2020 Census. The year 2020 marks the beginning of a new decade, which means it’s time for the U.S. Census Bureau to conduct its decennial count of every person living in the United States. The 2020 Census will have widesweeping implications for rural Oklahoma from distribution of federal dollars to legislative representation. Read more about the census below and be prepared to make sure rural Oklahoma counts!

1. The census is your opportunity to stand with Oklahoma. Responding to the census fulfills your civic duty because the count is mandated by the U.S. Constitution. But completing the 2020 Census also is your chance to take pride in being an Oklahoman and take a stand for our great state. A complete and accurate count of our population will provide a snapshot of who we are, where we live and so much more. 2. The census benefits you, your family and your community. The census provides a critical snapshot of our communities, including our population and where we live. Lawmakers, business owners, researchers and community leaders use the data to provide services, products and support to you and your community. Every year, billions of dollars in federal funding go to hospitals, fire departments, schools, roads and other resources based on census data. The results also

determine the number of seats Oklahoma receives in the U.S. House of Representatives and are used to draw congressional and state legislative districts. 3. Your invitation to participate in the 2020 Census will arrive this spring. Beginning in mid-March, most households will receive a mailed invitation to respond to the census. Some households, such as those who do not receive mail at their home’s physical location, will receive an in-person invitation from a census taker. This year, the Census Bureau will be encouraging responders to complete the census questionnaire online. By April 1, 2020 – also known as Census Day – every home will receive an invitation to participate in the 2020 Census. Throughout April, the Census Bureau will remind those who have not yet completed the census by sending reminder letters and postcards. Census takers will begin visiting homes in May that have not responded to the 2020 Census to ensure everyone is counted.

Oklahoma Country is the official magazine of Oklahoma Farm Bureau. Our winter issue features nine farm and ranch families recognized by the...

Oklahoma Country is the official magazine of Oklahoma Farm Bureau. Our winter issue features nine farm and ranch families recognized by the...