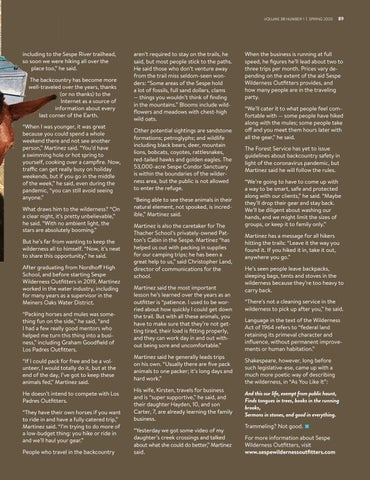 including to the Sespe River trailhead, so soon we were hiking all over the place too,” he said. The backcountry has become more well-traveled over the years, thanks (or no thanks) to the Internet as a source of information about every last corner of the Earth. “When I was younger, it was great because you could spend a whole weekend there and not see another person,” Martinez said. “You’d have a swimming hole or hot spring to yourself, cooking over a campfire. Now, traffic can get really busy on holiday weekends, but if you go in the middle of the week,” he said, even during the pandemic, “you can still avoid seeing anyone.” What draws him to the wilderness? “On a clear night, it’s pretty unbelievable,” he said. “With no ambient light, the stars are absolutely booming.” But he’s far from wanting to keep the wilderness all to himself. “Now, it’s neat to share this opportunity,” he said. After graduating from Nordhoff High School, and before starting Sespe Wilderness Outfitters in 2019, Martinez worked in the water industry, including for many years as a supervisor in the Meiners Oaks Water District. “Packing horses and mules was something fun on the side,” he said, “and I had a few really good mentors who helped me turn this thing into a business,” including Graham Goodfield of Los Padres Outfitters. “If I could pack for free and be a volunteer, I would totally do it, but at the end of the day, I’ve got to keep these animals fed,” Martinez said. He doesn’t intend to compete with Los Padres Outfitters. “They have their own horses if you want to ride in and have a fully catered trip,” Martinez said. “I’m trying to do more of a low-budget thing: you hike or ride in and we’ll haul your gear.” People who travel in the backcountry

aren’t required to stay on the trails, he said, but most people stick to the paths. He said those who don’t venture away from the trail miss seldom-seen wonders: “Some areas of the Sespe hold a lot of fossils, full sand dollars, clams — things you wouldn’t think of finding in the mountains.” Blooms include wildflowers and meadows with chest-high wild oats. Other potential sightings are sandstone formations; petroglyphs; and wildlife including black bears, deer, mountain lions, bobcats, coyotes, rattlesnakes, red-tailed hawks and golden eagles. The 53,000-acre Sespe Condor Sanctuary is within the boundaries of the wilderness area, but the public is not allowed to enter the refuge. “Being able to see these animals in their natural element, not spooked, is incredible,” Martinez said. Martinez is also the caretaker for The Thacher School’s privately-owned Patton’s Cabin in the Sespe. Martinez “has helped us out with packing in supplies for our camping trips; he has been a great help to us,” said Christopher Land, director of communications for the school. Martinez said the most important lesson he’s learned over the years as an outfitter is “patience. I used to be worried about how quickly I could get down the trail. But with all these animals, you have to make sure that they’re not getting tired, their load is fitting properly, and they can work day in and out without being sore and uncomfortable.” Martinez said he generally leads trips on his own. “Usually there are five pack animals to one packer; it’s long days and hard work.” His wife, Kirsten, travels for business and is “super supportive,” he said, and their daughter Hayden, 10, and son Carter, 7, are already learning the family business. “Yesterday we got some video of my daughter’s creek crossings and talked about what she could do better,” Martinez said.

When the business is running at full speed, he figures he’ll lead about two to three trips per month. Prices vary depending on the extent of the aid Sespe Wilderness Outfitters provides, and how many people are in the traveling party. “We’ll cater it to what people feel comfortable with — some people have hiked along with the mules; some people take off and you meet them hours later with all the gear,” he said. The Forest Service has yet to issue guidelines about backcountry safety in light of the coronavirus pandemic, but Martinez said he will follow the rules. “We’re going to have to come up with a way to be smart, safe and protected along with our clients,” he said. “Maybe they’ll drop their gear and stay back. We’ll be diligent about washing our hands, and we might limit the sizes of groups, or keep it to family only.” Martinez has a message for all hikers hitting the trails: “Leave it the way you found it. If you hiked it in, take it out, anywhere you go.” He’s seen people leave backpacks, sleeping bags, tents and stoves in the wilderness because they’re too heavy to carry back. “There’s not a cleaning service in the wilderness to pick up after you,” he said. Language in the text of the Wilderness Act of 1964 refers to “federal land retaining its primeval character and influence, without permanent improvements or human habitation.” Shakespeare, however, long before such legislative-ese, came up with a much more poetic way of describing the wilderness, in “As You Like It”: And this our life, exempt from public haunt, Finds tongues in trees, books in the running brooks, Sermons in stones, and good in everything. Trammeling? Not good. For more information about Sespe Wilderness Outfitters, visit www.sespewildernessoutfitters.com