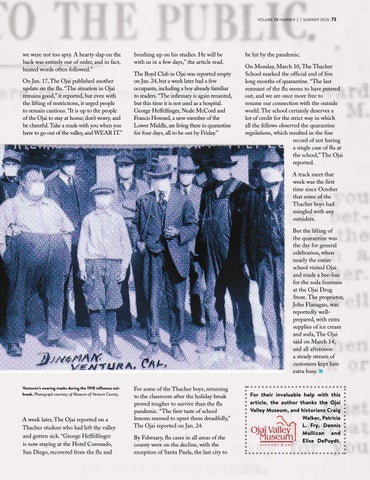 we were not too spry. A hearty slap on the back was entirely out of order, and in fact, heated words often followed.” On Jan. 17, The Ojai published another update on the flu. “The situation in Ojai remains good,” it reported, but even with the lifting of restrictions, it urged people to remain cautious. “It is up to the people of the Ojai to stay at home; don’t worry, and be cheerful. Take a mask with you when you have to go out of the valley, and WEAR IT.”

brushing up on his studies. He will be with us in a few days,” the article read. The Boyd Club in Ojai was reported empty on Jan. 24, but a week later had a few occupants, including a boy already familiar to readers. “The infirmary is again tenanted, but this time it is not used as a hospital. George Heffelfinger, Neale McCord and Francis Howard, a new member of the Lower Middle, are living there in quarantine for four days, all to be out by Friday.”

be hit by the pandemic. On Monday, March 10, The Thacher School marked the official end of five long months of quarantine. “The last remnant of the flu seems to have petered out, and we are once more free to resume our connection with the outside world. The school certainly deserves a lot of credit for the strict way in which all the fellows observed the quarantine regulations, which resulted in the fine record of not having a single case of flu at the school,” The Ojai reported. A track meet that week was the first time since October that some of the Thacher boys had mingled with any outsiders. But the lifting of the quarantine was the day for general celebration, when nearly the entire school visited Ojai and made a bee-line for the soda fountain at the Ojai Drug Store. The proprietor, John Flanagan, was reportedly wellprepared, with extra supplies of ice cream and soda, The Ojai said on March 14, and all afternoon a steady stream of customers kept him extra busy.

A week later, The Ojai reported on a Thacher student who had left the valley and gotten sick. “George Heffelfinger is now staying at the Hotel Coronado, San Diego, recovered from the flu and

For some of the Thacher boys, returning to the classroom after the holiday break proved tougher to survive than the flu pandemic. “The first taste of school lessons seemed to upset them dreadfully,” The Ojai reported on Jan. 24. By February, flu cases in all areas of the county were on the decline, with the exception of Santa Paula, the last city to

For their invaluable help with this article, the author thanks the Ojai Valley Museum, and historians Craig Walker, Patricia L. Fry, Dennis Mullican and Elise DePuydt.