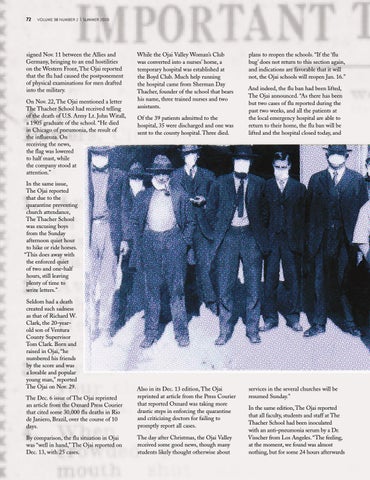 signed Nov. 11 between the Allies and Germany, bringing to an end hostilities on the Western Front, The Ojai reported that the flu had caused the postponement of physical examinations for men drafted into the military. On Nov. 22, The Ojai mentioned a letter The Thacher School had received telling of the death of U.S. Army Lt. John Witall, a 1905 graduate of the school. “He died in Chicago of pneumonia, the result of the influenza. On receiving the news, the flag was lowered to half mast, while the company stood at attention.”

While the Ojai Valley Woman’s Club was converted into a nurses’ home, a temporary hospital was established at the Boyd Club. Much help running the hospital came from Sherman Day Thacher, founder of the school that bears his name, three trained nurses and two assistants. Of the 39 patients admitted to the hospital, 35 were discharged and one was sent to the county hospital. Three died.

plans to reopen the schools. “If the ‘flu bug’ does not return to this section again, and indications are favorable that it will not, the Ojai schools will reopen Jan. 16.” And indeed, the flu ban had been lifted, The Ojai announced. “As there has been but two cases of flu reported during the past two weeks, and all the patients at the local emergency hospital are able to return to their home, the flu ban will be lifted and the hospital closed today, and

In the same issue, The Ojai reported that due to the quarantine preventing church attendance, The Thacher School was excusing boys from the Sunday afternoon quiet hour to hike or ride horses. “This does away with the enforced quiet of two and one-half hours, still leaving plenty of time to write letters.” Seldom had a death created such sadness as that of Richard W. Clark, the 20-yearold son of Ventura County Supervisor Tom Clark. Born and raised in Ojai, “he numbered his friends by the score and was a lovable and popular young man,” reported The Ojai on Nov. 29. The Dec. 6 issue of The Ojai reprinted an article from the Oxnard Press Courier that cited some 30,000 flu deaths in Rio de Janiero, Brazil, over the course of 10 days.

Also in its Dec. 13 edition, The Ojai reprinted at article from the Press Courier that reported Oxnard was taking more drastic steps in enforcing the quarantine and criticizing doctors for failing to promptly report all cases.

By comparison, the flu situation in Ojai was “well in hand,” The Ojai reported on Dec. 13, with 25 cases.

The day after Christmas, the Ojai Valley received some good news, though many students likely thought otherwise about

services in the several churches will be resumed Sunday.” In the same edition, The Ojai reported that all faculty, students and staff at The Thacher School had been inoculated with an anti-pneumonia serum by a Dr. Visscher from Los Angeles. “The feeling, at the moment, we found was almost nothing, but for some 24 hours afterwards