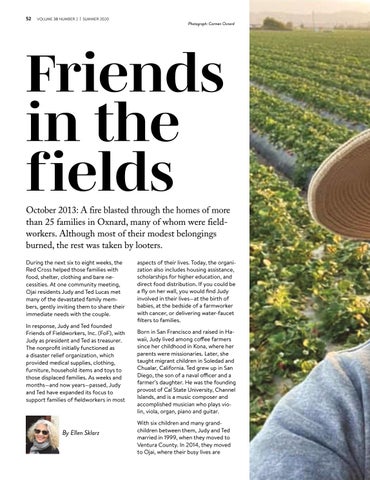 Friends in the fields October 2013: A fire blasted through the homes of more than 25 families in Oxnard, many of whom were fieldworkers. Although most of their modest belongings burned, the rest was taken by looters. During the next six to eight weeks, the Red Cross helped those families with food, shelter, clothing and bare necessities. At one community meeting, Ojai residents Judy and Ted Lucas met many of the devastated family members, gently inviting them to share their immediate needs with the couple. In response, Judy and Ted founded Friends of Fieldworkers, Inc. (FoF), with Judy as president and Ted as treasurer. The nonprofit initially functioned as a disaster relief organization, which provided medical supplies, clothing, furniture, household items and toys to those displaced families. As weeks and months—and now years—passed, Judy and Ted have expanded its focus to support families of fieldworkers in most

aspects of their lives. Today, the organization also includes housing assistance, scholarships for higher education, and direct food distribution. If you could be a fly on her wall, you would find Judy involved in their lives—at the birth of babies, at the bedside of a farmworker with cancer, or delivering water-faucet filters to families. Born in San Francisco and raised in Hawaii, Judy lived among coffee farmers since her childhood in Kona, where her parents were missionaries. Later, she taught migrant children in Soledad and Chualar, California. Ted grew up in San Diego, the son of a naval officer and a farmer’s daughter. He was the founding provost of Cal State University, Channel Islands, and is a music composer and accomplished musician who plays violin, viola, organ, piano and guitar. With six children and many grandchildren between them, Judy and Ted married in 1999, when they moved to Ventura County. In 2014, they moved to Ojai, where their busy lives are