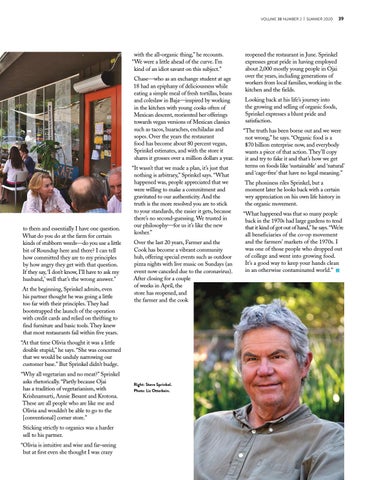 with the all-organic thing,” he recounts. “We were a little ahead of the curve. I’m kind of an idiot savant on this subject.” Chase—who as an exchange student at age 18 had an epiphany of deliciousness while eating a simple meal of fresh tortillas, beans and coleslaw in Baja—inspired by working in the kitchen with young cooks often of Mexican descent, reoriented her offerings towards vegan versions of Mexican classics such as tacos, huaraches, enchiladas and sopes. Over the years the restaurant food has become about 80 percent vegan, Sprinkel estimates, and with the store it shares it grosses over a million dollars a year.

to them and essentially I have one question. What do you do at the farm for certain kinds of stubborn weeds—do you use a little bit of Roundup here and there? I can tell how committed they are to my principles by how angry they get with that question. If they say, ‘I don’t know, I’ll have to ask my husband,’ well that’s the wrong answer.” At the beginning, Sprinkel admits, even his partner thought he was going a little too far with their principles. They had bootstrapped the launch of the operation with credit cards and relied on thrifting to find furniture and basic tools. They knew that most restaurants fail within five years.

“It wasn’t that we made a plan, it’s just that nothing is arbitrary,” Sprinkel says. “What happened was, people appreciated that we were willing to make a commitment and gravitated to our authenticity. And the truth is the more resolved you are to stick to your standards, the easier it gets, because there’s no second-guessing. We trusted in our philosophy—for us it’s like the new kosher.” Over the last 20 years, Farmer and the Cook has become a vibrant community hub, offering special events such as outdoor pizza nights with live music on Sundays (an event now canceled due to the coronavirus). After closing for a couple of weeks in April, the store has reopened, and the farmer and the cook

“At that time Olivia thought it was a little double stupid,” he says. “She was concerned that we would be unduly narrowing our customer base.” But Sprinkel didn’t budge. “Why all vegetarian and no meat?” Sprinkel asks rhetorically. “Partly because Ojai has a tradition of vegetarianism, with Krishnamurti, Annie Besant and Krotona. These are all people who are like me and Olivia and wouldn’t be able to go to the [conventional] corner store.” Sticking strictly to organics was a harder sell to his partner. “Olivia is intuitive and wise and far-seeing but at first even she thought I was crazy

reopened the restaurant in June. Sprinkel expresses great pride in having employed about 2,000 mostly young people in Ojai over the years, including generations of workers from local families, working in the kitchen and the fields. Looking back at his life’s journey into the growing and selling of organic foods, Sprinkel expresses a blunt pride and satisfaction. “The truth has been borne out and we were not wrong,” he says. “Organic food is a $70 billion enterprise now, and everybody wants a piece of that action. They’ll copy it and try to fake it and that’s how we get terms on foods like ‘sustainable’ and ‘natural’ and ‘cage-free’ that have no legal meaning.” The phoniness riles Sprinkel, but a moment later he looks back with a certain wry appreciation on his own life history in the organic movement. “What happened was that so many people back in the 1970s had large gardens to tend that it kind of got out of hand,” he says. “We’re all beneficiaries of the co-op movement and the farmers’ markets of the 1970s. I was one of those people who dropped out of college and went into growing food. It’s a good way to keep your hands clean in an otherwise contaminated world.”