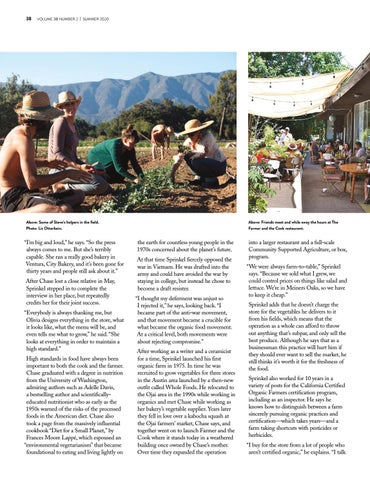 Above: Some of Steve’s helpers in the field. Photo: Liz Otterbein.

“I’m big and loud,” he says. “So the press always comes to me. But she’s terribly capable. She ran a really good bakery in Ventura, City Bakery, and it’s been gone for thirty years and people still ask about it.” After Chase lost a close relative in May, Sprinkel stepped in to complete the interview in her place, but repeatedly credits her for their joint success. “Everybody is always thanking me, but Olivia designs everything in the store, what it looks like, what the menu will be, and even tells me what to grow,” he said. “She looks at everything in order to maintain a high standard.” High standards in food have always been important to both the cook and the farmer. Chase graduated with a degree in nutrition from the University of Washington, admiring authors such as Adelle Davis, a bestselling author and scientificallyeducated nutritionist who as early as the 1950s warned of the risks of the processed foods in the American diet. Chase also took a page from the massively influential cookbook “Diet for a Small Planet,” by Frances Moore Lappé, which espoused an “environmental vegetarianism” that became foundational to eating and living lightly on

Above: Friends meet and while away the hours at The Farmer and the Cook restaurant.

the earth for countless young people in the 1970s concerned about the planet’s future. At that time Sprinkel fiercely opposed the war in Vietnam. He was drafted into the army and could have avoided the war by staying in college, but instead he chose to become a draft resister. “I thought my deferment was unjust so I rejected it,” he says, looking back. “I became part of the anti-war movement, and that movement became a crucible for what became the organic food movement. At a critical level, both movements were about rejecting compromise.” After working as a writer and a ceramicist for a time, Sprinkel launched his first organic farm in 1975. In time he was recruited to grow vegetables for three stores in the Austin area launched by a then-new outfit called Whole Foods. He relocated to the Ojai area in the 1990s while working in organics and met Chase while working as her bakery’s vegetable supplier. Years later they fell in love over a kabocha squash at the Ojai farmers’ market, Chase says, and together went on to launch Farmer and the Cook where it stands today in a weathered building once owned by Chase’s mother. Over time they expanded the operation

into a larger restaurant and a full-scale Community Supported Agriculture, or box, program. “We were always farm-to-table,” Sprinkel says. “Because we sold what I grew, we could control prices on things like salad and lettuce. We’re in Meiners Oaks, so we have to keep it cheap.” Sprinkel adds that he doesn’t charge the store for the vegetables he delivers to it from his fields, which means that the operation as a whole can afford to throw out anything that’s subpar, and only sell the best produce. Although he says that as a businessman this practice will hurt him if they should ever want to sell the market, he still thinks it’s worth it for the freshness of the food. Sprinkel also worked for 10 years in a variety of posts for the California Certified Organic Farmers certification program, including as an inspector. He says he knows how to distinguish between a farm sincerely pursuing organic practices and certification—which takes years—and a farm taking shortcuts with pesticides or herbicides. “I buy for the store from a lot of people who aren’t certified organic,” he explains. “I talk