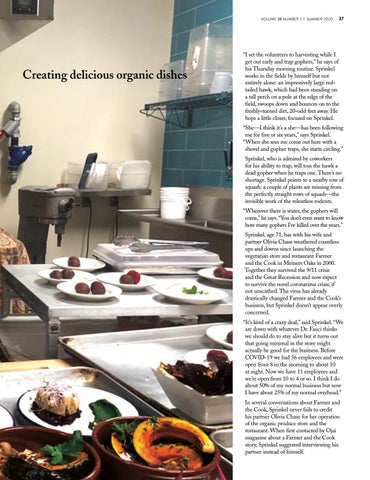 “I set the volunteers to harvesting while I get out early and trap gophers,” he says of his Thursday morning routine. Sprinkel works in the fields by himself but not entirely alone: an impressively large redtailed hawk, which had been standing on a tall perch on a pole at the edge of the field, swoops down and bounces on to the freshly-turned dirt, 20-odd feet away. He hops a little closer, focused on Sprinkel. “She—I think it’s a she—has been following me for five or six years,” says Sprinkel. “When she sees me come out here with a shovel and gopher traps, she starts circling.” Sprinkel, who is admired by coworkers for his ability to trap, will toss the hawk a dead gopher when he traps one. There’s no shortage. Sprinkel points to a nearby row of squash: a couple of plants are missing from the perfectly straight rows of squash—the invisible work of the relentless rodents. “Wherever there is water, the gophers will come,” he says. “You don’t even want to know how many gophers I’ve killed over the years.” Sprinkel, age 71, has with his wife and partner Olivia Chase weathered countless ups and downs since launching the vegetarian store and restaurant Farmer and the Cook in Meiners Oaks in 2000. Together they survived the 9/11 crisis and the Great Recession and now expect to survive the novel coronavirus crisis, if not unscathed. The virus has already drastically changed Farmer and the Cook’s business, but Sprinkel doesn’t appear overly concerned. “It’s kind of a crazy deal,” said Sprinkel. “We are down with whatever Dr. Fauci thinks we should do to stay alive but it turns out that going minimal in the store might actually be good for the business. Before COVID-19 we had 56 employees and were open from 8 in the morning to about 10 at night. Now we have 11 employees and we’re open from 10 to 4 or so. I think I do about 50% of my normal business but now I have about 25% of my normal overhead.” In several conversations about Farmer and the Cook, Sprinkel never fails to credit his partner Olivia Chase for her operation of the organic produce store and the restaurant. When first contacted by Ojai magazine about a Farmer and the Cook story, Sprinkel suggested interviewing his partner instead of himself.