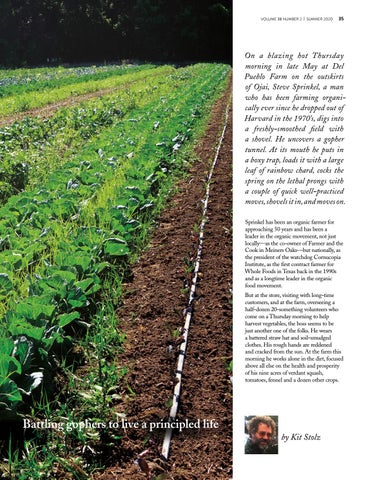 On a blazing hot Thursday morning in late May at Del Pueblo Farm on the outskirts of Ojai, Steve Sprinkel, a man who has been farming organically ever since he dropped out of Harvard in the 1970â&amp;#x20AC;&amp;#x2122;s, digs into a freshly-smoothed field with a shovel. He uncovers a gopher tunnel. At its mouth he puts in a boxy trap, loads it with a large leaf of rainbow chard, cocks the spring on the lethal prongs with a couple of quick well-practiced moves, shovels it in, and moves on. Sprinkel has been an organic farmer for approaching 50 years and has been a leader in the organic movement, not just locallyâ&amp;#x20AC;&amp;#x201D;as the co-owner of Farmer and the Cook in Meiners Oaksâ&amp;#x20AC;&amp;#x201D;but nationally, as the president of the watchdog Cornucopia Institute, as the first contract farmer for Whole Foods in Texas back in the 1990s and as a longtime leader in the organic food movement. But at the store, visiting with long-time customers, and at the farm, overseeing a half-dozen 20-something volunteers who come on a Thursday morning to help harvest vegetables, the boss seems to be just another one of the folks. He wears a battered straw hat and soil-smudged clothes. His rough hands are reddened and cracked from the sun. At the farm this morning he works alone in the dirt, focused above all else on the health and prosperity of his nine acres of verdant squash, tomatoes, fennel and a dozen other crops.

Battling gophers to live a principled life by Kit Stolz