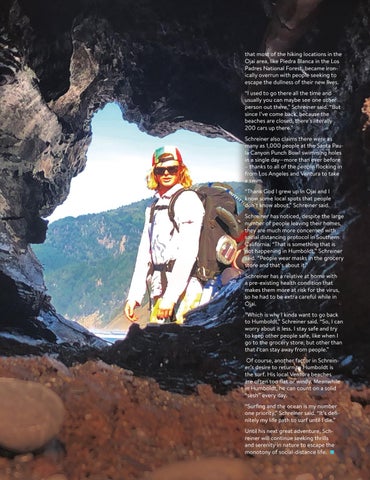 that most of the hiking locations in the Ojai area, like Piedra Blanca in the Los Padres National Forest, became ironically overrun with people seeking to escape the dullness of their new lives. “I used to go there all the time and usually you can maybe see one other person out there,” Schreiner said. “But since I’ve come back, because the beaches are closed, there’s literally 200 cars up there.” Schreiner also claims there were as many as 1,000 people at the Santa Paula Canyon Punch Bowl swimming holes in a single day—more than ever before – thanks to all of the people flocking in from Los Angeles and Ventura to take a swim. “Thank God I grew up in Ojai and I know some local spots that people don’t know about,” Schreiner said. Schreiner has noticed, despite the large number of people leaving their homes, they are much more concerned with social distancing protocol in Southern California. “That is something that is not happening in Humboldt,” Schreiner said. “People wear masks in the grocery store and that’s about it.” Schreiner has a relative at home with a pre-existing health condition that makes them more at risk for the virus, so he had to be extra careful while in Ojai. “Which is why I kinda want to go back to Humboldt,” Schreiner said. “So, I can worry about it less. I stay safe and try to keep other people safe, like when I go to the grocery store, but other than that I can stay away from people.” Of course, another factor in Schreiner’s desire to return to Humboldt is the surf. His local Ventura beaches are often too flat or windy. Meanwhile in Humboldt, he can count on a solid “sesh” every day. “Surfing and the ocean is my number one priority,” Schreiner said. “It’s definitely my life path to surf until I die.” Until his next great adventure, Schreiner will continue seeking thrills and serenity in nature to escape the monotony of social-distance life.