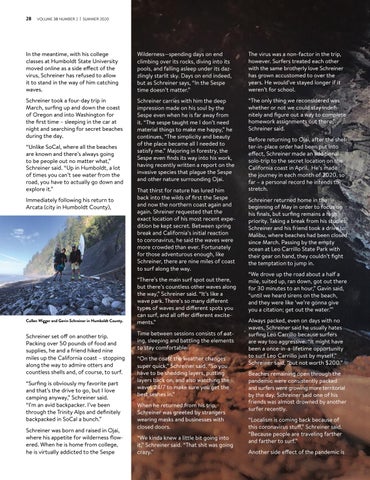 In the meantime, with his college classes at Humboldt State University moved online as a side effect of the virus, Schreiner has refused to allow it to stand in the way of him catching waves.

Wilderness—spending days on end climbing over its rocks, diving into its pools, and falling asleep under its dazzlingly starlit sky. Days on end indeed, but as Schreiner says, “In the Sespe time doesn’t matter.”

The virus was a non-factor in the trip, however. Surfers treated each other with the same brotherly love Schreiner has grown accustomed to over the years. He would’ve stayed longer if it weren’t for school.

Schreiner took a four-day trip in March, surfing up and down the coast of Oregon and into Washington for the first time – sleeping in the car at night and searching for secret beaches during the day.

Schreiner carries with him the deep impression made on his soul by the Sespe even when he is far away from it. “The sespe taught me I don’t need material things to make me happy,” he continues, “The simplicity and beauty of the place became all I needed to satisfy me.” Majoring in forestry, the Sespe even finds its way into his work, having recently written a report on the invasive species that plague the Sespe and other nature surrounding Ojai.

“The only thing we reconsidered was whether or not we could stay indefinitely and figure out a way to complete homework assignments out there,” Schreiner said.

“Unlike SoCal, where all the beaches are known and there’s always going to be people out no matter what,” Schreiner said. “Up in Humboldt, a lot of times you can’t see water from the road, you have to actually go down and explore it.” Immediately following his return to Arcata (city in Humboldt County),

Schreiner set off on another trip. Packing over 50 pounds of food and supplies, he and a friend hiked nine miles up the California coast – stopping along the way to admire otters and countless shells and, of course, to surf. “Surfing is obviously my favorite part and that’s the drive to go, but I love camping anyway,” Schreiner said. “I’m an avid backpacker. I’ve been through the Trinity Alps and definitely backpacked in SoCal a bunch.” Schreiner was born and raised in Ojai, where his appetite for wilderness flowered. When he is home from college, he is virtually addicted to the Sespe

That thirst for nature has lured him back into the wilds of first the Sespe and now the northern coast again and again. Shreiner requested that the exact location of his most recent expedition be kept secret. Between spring break and California’s initial reaction to coronavirus, he said the waves were more crowded than ever. Fortunately for those adventurous enough, like Schreiner, there are nine miles of coast to surf along the way. “There’s the main surf spot out there, but there’s countless other waves along the way,” Schreiner said. “It’s like a wave park. There’s so many different types of waves and different spots you can surf, and all offer different excitements.” Time between sessions consists of eating, sleeping and battling the elements to stay comfortable. “On the coast the weather changes super quick,” Schreiner said. “So you have to be shedding layers, putting layers back on, and also watching the waves 24/7 to make sure you get the best seshes in.” When he returned from his trip, Schreiner was greeted by strangers wearing masks and businesses with closed doors. “We kinda knew a little bit going into it,” Schreiner said. “That shit was going crazy.”

Before returning to Ojai, after the shelter-in-place order had been put into effect, Schreiner made an additional solo-trip to the secret location on the California coast in April. He’s made the journey in each month of 2020, so far – a personal record he intends to stretch. Schreiner returned home in the beginning of May in order to focus on his finals, but surfing remains a high priority. Taking a break from his studies, Schreiner and his friend took a drive to Malibu, where beaches had been closed since March. Passing by the empty ocean at Leo Carrillo State Park with their gear on hand, they couldn’t fight the temptation to jump in. “We drove up the road about a half a mile, suited up, ran down, got out there for 30 minutes to an hour,” Gavin said, “until we heard sirens on the beach, and they were like ‘we’re gonna give you a citation; get out the water.’” Always packed, even on days with no waves, Schreiner said he usually hates surfing Leo Carrillo because surfers are way too aggressive. “It might have been a once-in-a-lifetime opportunity to surf Leo Carrillo just by myself,” Schreiner said, “but not worth $200.” Beaches remaining open through the pandemic were consistently packed and surfers were growing more territorial by the day. Schreiner said one of his friends was almost drowned by another surfer recently. “Localism is coming back because of this coronavirus stuff,” Schreiner said. “Because people are traveling farther and farther to surf.” Another side effect of the pandemic is