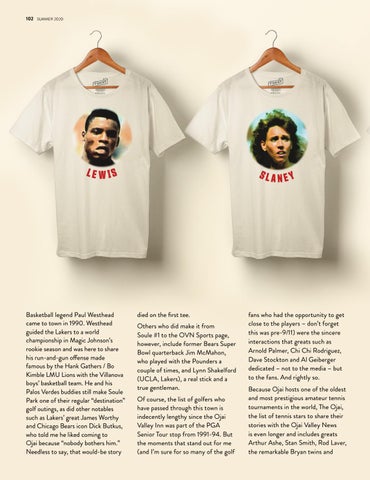 Basketball legend Paul Westhead came to town in 1990. Westhead guided the Lakers to a world championship in Magic Johnson’s rookie season and was here to share his run-and-gun offense made famous by the Hank Gathers / Bo Kimble LMU Lions with the Villanova boys’ basketball team. He and his Palos Verdes buddies still make Soule Park one of their regular “destination” golf outings, as did other notables such as Lakers’ great James Worthy and Chicago Bears icon Dick Butkus, who told me he liked coming to Ojai because “nobody bothers him.” Needless to say, that would-be story

died on the first tee. Others who did make it from Soule #1 to the OVN Sports page, however, include former Bears Super Bowl quarterback Jim McMahon, who played with the Pounders a couple of times, and Lynn Shakelford (UCLA, Lakers), a real stick and a true gentleman. Of course, the list of golfers who have passed through this town is indecently lengthy since the Ojai Valley Inn was part of the PGA Senior Tour stop from 1991-94. But the moments that stand out for me (and I’m sure for so many of the golf

fans who had the opportunity to get close to the players – don’t forget this was pre-9/11) were the sincere interactions that greats such as Arnold Palmer, Chi Chi Rodriguez, Dave Stockton and Al Geiberger dedicated – not to the media – but to the fans. And rightly so. Because Ojai hosts one of the oldest and most prestigious amateur tennis tournaments in the world, The Ojai, the list of tennis stars to share their stories with the Ojai Valley News is even longer and includes greats Arthur Ashe, Stan Smith, Rod Laver, the remarkable Bryan twins and