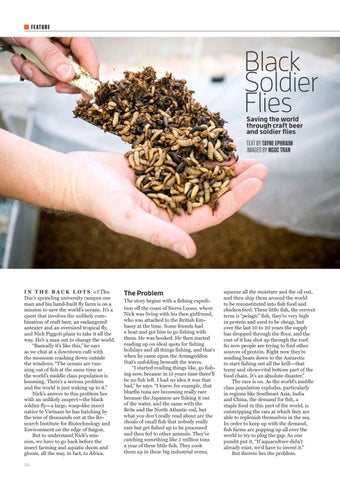 I N T H E B A C K L O T S o f Thu Duc’s sprawling university campus one man and his hand-built fly farm is on a mission to save the world’s oceans. It’s a quest that involves the unlikely combination of craft beer, an endangered anteater and an oversized tropical fly, and Nick Piggott plans to take it all the way. He’s a man out to change the world. “Basically it’s like this,” he says as we chat at a downtown café with the monsoon crashing down outside the windows. “The oceans are running out of fish at the same time as the world’s middle class population is booming. There’s a serious problem and the world is just waking up to it.” Nick’s answer to this problem lies with an unlikely suspect—the black soldier fly—a large, wasp-like insect native to Vietnam he has hatching by the tens of thousands out at the Research Institute for Biotechnology and Environment on the edge of Saigon. But to understand Nick’s mission, we have to go back before the insect farming and aquatic doom and gloom, all the way, in fact, to Africa. 20

The Problem The story begins with a fishing expedition off the coast of Sierra Leone, where Nick was living with his then girlfriend, who was attached to the British Embassy at the time. Some friends had a boat and got him to go fishing with them. He was hooked. He then started reading up on ideal spots for fishing holidays and all things fishing, and that’s when he came upon the Armageddon that’s unfolding beneath the waves. “I started reading things like, go fishing now, because in 15 years time there’ll be no fish left. I had no idea it was that bad,” he says. “I knew, for example, that bluefin tuna are becoming really rare because the Japanese are fishing it out of the water, and the same with the Brits and the North Atlantic cod, but what you don’t really read about are the shoals of small fish that nobody really eats but get fished up to be processed and then fed to other animals. They’re catching something like 5 million tons a year of these little fish. They cook them up in these big industrial ovens,

squeeze all the moisture and the oil out, and then ship them around the world to be reconstituted into fish food and chicken feed. These little fish, the correct term is “pelagic” fish, they’re very high in protein and used to be cheap, but over the last 10 to 20 years the supply has dropped through the floor, and the cost of it has shot up through the roof. So now people are trying to find other sources of protein. Right now they’re sending boats down to the Antarctic to start fishing out all the krill—that teeny and oh-so-vital bottom part of the food chain. It’s an absolute disaster.” The race is on. As the world’s middle class population explodes, particularly in regions like Southeast Asia, India and China, the demand for fish, a staple food in this part of the world, is outstripping the rate at which they are able to replenish themselves in the sea. In order to keep up with the demand, fish farms are popping up all over the world to try to plug the gap. As one pundit put it, “If aquaculture didn’t already exist, we’d have to invent it.” But therein lies the problem. 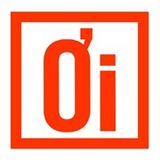