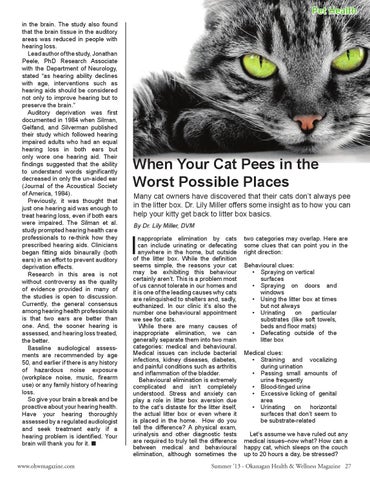 Pet Health in the brain. The study also found that the brain tissue in the auditory areas was reduced in people with hearing loss. Lead author of the study, Jonathan Peele, PhD Research Associate with the Department of Neurology, stated “as hearing ability declines with age, interventions such as hearing aids should be considered not only to improve hearing but to preserve the brain.” Auditory deprivation was first documented in 1984 when Silman, Gelfand, and Silverman published their study which followed hearing impaired adults who had an equal hearing loss in both ears but only wore one hearing aid. Their findings suggested that the ability to understand words significantly decreased in only the un-aided ear (Journal of the Acoustical Society of America, 1984). Previously, it was thought that just one hearing aid was enough to treat hearing loss, even if both ears were impaired. The Silman et al. study prompted hearing health care professionals to re-think how they prescribed hearing aids. Clinicians began fitting aids binaurally (both ears) in an effort to prevent auditory deprivation effects. Research in this area is not without controversy as the quality of evidence provided in many of the studies is open to discussion. Currently, the general consensus among hearing health professionals is that two ears are better than one. And, the sooner hearing is assessed, and hearing loss treated, the better. Baseline audiological assessments are recommended by age 50, and earlier if there is any history of hazardous noise exposure (workplace noise, music, firearm use) or any family history of hearing loss. So give your brain a break and be proactive about your hearing health. Have your hearing thoroughly assessed by a regulated audiologist and seek treatment early if a hearing problem is identified. Your brain will thank you for it. n

When Your Cat Pees in the Worst Possible Places

Many cat owners have discovered that their cats don’t always pee in the litter box. Dr. Lily Miller offers some insight as to how you can help your kitty get back to litter box basics.

nappropriate elimination by cats can include urinating or defecating anywhere in the home, but outside of the litter box. While the definition seems simple, the reasons your cat may be exhibiting this behaviour certainly aren’t. This is a problem most of us cannot tolerate in our homes and it is one of the leading causes why cats are relinquished to shelters and, sadly, euthanized. In our clinic it’s also the number one behavioural appointment we see for cats. While there are many causes of inappropriate elimination, we can generally separate them into two main categories: medical and behavioural. Medical issues can include bacterial infections, kidney diseases, diabetes, and painful conditions such as arthritis and inflammation of the bladder. Behavioural elimination is extremely complicated and isn’t completely understood. Stress and anxiety can play a role in litter box aversion due to the cat’s distaste for the litter itself, the actual litter box or even where it is placed in the home. How do you tell the difference? A physical exam, urinalysis and other diagnostic tests are required to truly tell the difference between medical and behavioural elimination, although sometimes the

two categories may overlap. Here are some clues that can point you in the right direction: Behavioural clues: • Spraying on vertical surfaces • Spraying on doors and windows • Using the litter box at times but not always • Urinating on particular substrates (like soft towels, beds and floor mats) • Defecating outside of the litter box Medical clues: • Straining and vocalizing during urination • Passing small amounts of urine frequently • Blood-tinged urine • Excessive licking of genital area • Urinating on horizontal surfaces that don’t seem to be substrate-related Let’s assume we have ruled out any medical issues–now what? How can a happy cat, which sleeps on the couch up to 20 hours a day, be stressed? 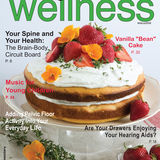