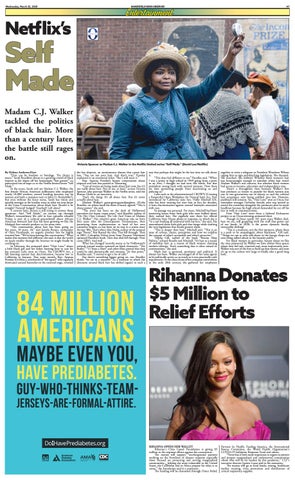 Self Made Madam C.J. Walker tackled the politics of black hair. More than a century later, the battle still rages on. Octavia Spencer as Madam C.J. Walker in the Netflix limited series “Self Made.” (David Lee/Netflix)

By Helena Andrews-Dyer “Hair can be freedom or bondage. The choice is yours,” Sarah Breedlove shouts to a growing crowd of black women as she shows off her homemade “hair grower” — palm-sized tins of hope — in the Netflix limited series “Self Made.” In the scene, Sarah isn’t yet Madam C.J. Walker: the first female African American millionaire who employed nearly 10,000 workers, owned bustling factories run by women and built a mansion next to John D. Rockefeller’s. But even without the fancy name, Sarah has vision and quickly emerges as the loudest voice in what we now know as the Great Conversation about black hair. Should it be straight? Natural? Judged? Touched? Left alone? A century later, society is still trying to answer those questions. And “Self Made,” an earnest zip through Walker’s extraordinary life told in four episodes released Friday, is part of a cultural groundswell about African American women’s hair that has been growing — like the Madam’s first miracle product — for some time. “This conversation about hair has been going on five years, 10 years, 20,” said Jamyla Bennu, co-founder of Oyin Handmade, an organic product line for highly textured hair. “We’ve been having this conversation.” What makes this moment feel different, she said, is that the world — made smaller through the Internet — might finally be catching on. In February, the animated short “Hair Love,” about a little black girl and her father learning how to care for her textured curls, won an Oscar. The CROWN Act, a bill banning natural hair discrimination, became law in California in January. That same month, Rep. Ayanna Pressley (D-Mass.), one-fourth of “the squad” who regularly showcased natural hairstyles on the national stage, revealed

she has alopecia, an autoimmune disease that causes hair loss. “You are not your hair. And that’s true,” Pressley explained in an emotional video. “But I still want it.” Rep. Ayanna Pressley’s honest conversation about alopecia and hair loss praised as ‘liberating’ “Lots of stories are being made about hair now, but it’s not really about hair. Not to me, at least,” actress Octavia Spencer, who portrays Walker in the Netflix series, told the Boston Globe in an interview. That’s the thing: It’s all about hair. But it’s never actually about hair. Madam Walker’s great-great-granddaughter, A’Lelia Bundles, on whose book the show is based, agreed: “This is about power,” she said. “The story has been on the desk of Hollywood executives for many, many years,” said Bundles, author of “On Her Own Ground: The Life And Times of Madam C.J. Walker.” Her relative’s great American tale — born four years after the Emancipation Proclamation, then journeying from washerwoman to head of her own cosmetics empire — has been on its way to a screen since the late ’80s. That’s when Alex Haley, author of the seminal saga “Roots,” first floated the idea. That fell through. Then in 2001, Columbia TriStar (now Sony Pictures Television) optioned Bundles’s book. Then that deal fell through. Next came HBO. And well … What has changed recently seems to be Hollywood’s attitude toward movies centered on black characters. “The Butler,” “12 Years a Slave” and other films proved that they could be sold domestically and overseas. “At that point,” Bundles said, “I started to get a lot of calls.” But there’s something bigger going on, too. Bundles thinks “we are in a moment” — a moment in which the discourse around black hair has shifted (again) in such a

way that perhaps this might be the last time we talk about it. “This does feel different to me,” Bundles said. “When I was a senior in high school in 1969 going from a perm to an Afro, I thought we had won this battle. But that pendulum swung back with societal pressure. Now there are laws preventing people from sanctioning us and policing us.” Laws such as the aforementioned CROWN (Creating a Respectful Open Workplace for Natural hair) Act. First introduced by California state Sen. Holly Mitchell (D), who has been wearing her own hair in locs for decades, it bans discrimination against natural hairstyles associated with race. Its passage was personal. For years, Mitchell had been answering letters from little girls who were bullied about their natural hair. She regularly sent them her official California State House photo in response, in which she is “in a suit looking all senatorial with my locs,” she said. She remembered those little girls and that image while drafting the very legislation that would protect them. “This is deeper than hair,” Mitchell said. “This is an issue of culture, choice, perception and how we redefine the concept of what’s acceptable and what’s attractive.” Tiffany Gill, author of the book “Beauty Shop Politics,” echoed Bundle and Mitchell. “It’s hair as a means of mobility, hair as a means of black women claiming modern identity. That’s something that is often missed in conversations,” she said. Black hair is personal, persistent and political. It always has been. Walker encouraged all of her sales agents to be politically active — so much so it was practically a job requirement. At the close of one of her company conventions in the early 20th century, she gathered her employees

together to write a telegram to President Woodrow Wilson urging him to sign anti-lynching legislation. She donated. She marched. She lobbied. Whether black women’s hair was bone-straight enough to simulate white hair wasn’t Madam Walker’s real concern, but whether black women had access to income, education and independence was. There’s a throughline then between Walker’s first hair products — meant to provide for black women just one or two generations out of slavery — and the cultural hair acceptance now being codified into law. However, pushback still remains. Yes, “Hair Love” won an Oscar, but remember teenager DeAndre Arnold, who was invited to attend the ceremony alongside the producers after he made headlines because his high school demanded he cut off his locs to walk at commencement. How ‘Hair Love’ went from a beloved Kickstarter project to an Oscar-winning animated short Though it’s been nearly 101 years since Walker died, here we are, still grappling with the stuff that grows out of our heads. In 2020, is the power dynamic finally, irrevocably shifting? “This is a moment, not the first moment, where there is a push to be unapologetic about blackness,” Gill said. “Things we use to only talk about in the beauty shops are now being talked about in the broader public.” For black women in particular, beauty shops — like the ones pioneered by Walker — have always been spaces where they feel safe, centered and, most importantly, seen. Walker was one of the first to hold up that mirror, and now it’s up to the culture writ large to finally take a good long look.

RIHANNA OPENS HER WALLET Rihanna`s Clara Lionel Foundation is giving $5 million to the response efforts against the coronavirus. The money will support “on-the-ground partners working on the frontlines of disaster response especially those focused on protecting and serving marginalized communities _ helping the most vulnerable in the United States, the Caribbean and in Africa prepare for what is to come,'' the foundation said in a statement. The funding will be channeled through Direct Relief,

Partners In Health, Feeding America, the International Rescue Committee, the World Health Organization's COVID-19 Solidarity Response Fund and others. “Never has it been more important or urgent to protect and prepare marginalized and underserved communities -those who will be hit hardest by this pandemic,'' CLF's executive director Justine Lucas said in the statement. The money will go to food banks, testing, healthcare worker training, virus prevention and distribution of critical respiratory supplies.

Maybe even you, have prediabetes.