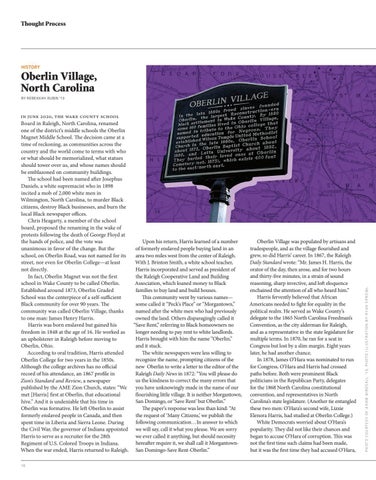 Oberlin Village, North Carolina in june 2020, the wake county school Board in Raleigh, North Carolina, renamed one of the district’s middle schools the Oberlin Magnet Middle School. The decision came at a time of reckoning, as communities across the country and the world come to terms with who or what should be memorialized, what statues should tower over us, and whose names should be emblazoned on community buildings. The school had been named after Josephus Daniels, a white supremacist who in 1898 incited a mob of 2,000 white men in Wilmington, North Carolina, to murder Black citizens, destroy Black businesses, and burn the local Black newspaper offices. Chris Heagarty, a member of the school board, proposed the renaming in the wake of protests following the death of George Floyd at Upon his return, Harris learned of a number the hands of police, and the vote was of formerly enslaved people buying land in an unanimous in favor of the change. But the area two miles west from the center of Raleigh. school, on Oberlin Road, was not named for its With J. Brinton Smith, a white school teacher, street, nor even for Oberlin College—at least Harris incorporated and served as president of not directly. the Raleigh Cooperative Land and Building In fact, Oberlin Magnet was not the first Association, which loaned money to Black school in Wake County to be called Oberlin. families to buy land and build houses. Established around 1873, Oberlin Graded This community went by various names— School was the centerpiece of a self-sufficient some called it “Peck’s Place” or “Morgantown,” Black community for over 90 years. The named after the white men who had previously community was called Oberlin Village, thanks owned the land. Others disparagingly called it to one man: James Henry Harris. “Save Rent,” referring to Black homeowners no Harris was born enslaved but gained his longer needing to pay rent to white landlords. freedom in 1848 at the age of 16. He worked as Harris brought with him the name “Oberlin,” an upholsterer in Raleigh before moving to and it stuck. Oberlin, Ohio. The white newspapers were less willing to According to oral tradition, Harris attended recognize the name, prompting citizens of the Oberlin College for two years in the 1850s. new Oberlin to write a letter to the editor of the Although the college archives has no official Raleigh Daily News in 1872: “You will please do record of his attendance, an 1867 profile in us the kindness to correct the many errors that Zion’s Standard and Review, a newspaper you have unknowingly made in the name of our published by the AME Zion Church, states: “We flourishing little village. It is neither Morgantown, met [Harris] first at Oberlin, that educational San Domingo, or ‘Save Rent’ but Oberlin.” hive.” And it is undeniable that his time in The paper’s response was less than kind: “At Oberlin was formative. He left Oberlin to assist the request of ‘Many Citizens,’ we publish the formerly enslaved people in Canada, and then following communication…In answer to which spent time in Liberia and Sierra Leone. During the Civil War, the governor of Indiana appointed we will say, call it what you please. We are sorry we ever called it anything, but should necessity Harris to serve as a recruiter for the 28th hereafter require it, we shall call it MorgantownRegiment of U.S. Colored Troops in Indiana. When the war ended, Harris returned to Raleigh. San Domingo-Save Rent-Oberlin.” 18

Oberlin Village was populated by artisans and tradespeople, and as the village flourished and grew, so did Harris’ career. In 1867, the Raleigh Daily Standard wrote: “Mr. James H. Harris, the orator of the day, then arose, and for two hours and thirty-five minutes, in a strain of sound reasoning, sharp invective, and loft eloquence enchained the attention of all who heard him.” Harris fervently believed that African Americans needed to fight for equality in the political realm. He served as Wake County’s delegate to the 1865 North Carolina Freedman’s Convention, as the city alderman for Raleigh, and as a representative in the state legislature for multiple terms. In 1870, he ran for a seat in Congress but lost by a slim margin. Eight years later, he had another chance. In 1878, James O’Hara was nominated to run for Congress. O’Hara and Harris had crossed paths before. Both were prominent Black politicians in the Republican Party, delegates for the 1868 North Carolina constitutional convention, and representatives in North Carolina’s state legislature. (Another tie entangled these two men: O’Hara’s second wife, Lizzie Elenora Harris, had studied at Oberlin College.) White Democrats worried about O’Hara’s popularity. They did not like their chances and began to accuse O’Hara of corruption. This was not the first time such claims had been made, but it was the first time they had accused O’Hara, 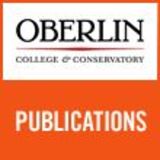