Jyll Bradley 'The friend I have/is a passionate friend' 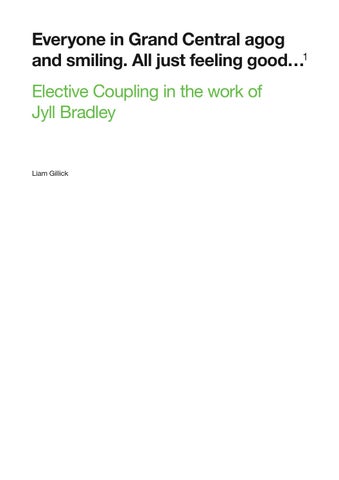 Everyone in Grand Central agog and smiling. All just feeling good…1 Elective Coupling in the work of Jyll Bradley

In Jyll Bradley’s modest and immersive new works, we have to keep in mind the political complexity at the heart of her practice. There is recognition of a semiotisation in rupture and a sexualisation in rupture. It is this process of rupture – which does not in any way have to imply resorting to thrashy expressionism or catatonic irony – that is captured in the work. Images of ‘becoming’ accentuated by short texts and bound in a protective yet resistant boxing. Photographic images in the service of advertising and information exchange present us with a contradictory set of conditions. They are at once new – always renewed or renewable – and at the same time caught within a coding of exchange that is limited by the desire to sell or share information despite the potential of contradictory context, lack of dialogue and potential disinterest at the point of exchange. Further, a certain quality of this type of image is its function as the excessive recipient/producer of signs and subjectivity. In Felix Guattari’s words; One of the main features of postindustrialist capitalism… was to transfer the productive structures of commodities and services onto structures productive of signs and subjectivity, through the media, surveys and advertisements.2 Adverts in the form of a ‘photograph of something specific’ attended by a text or logo tend to conjure desire that is either overreached and over served or generally disengaged from its origin. These aspects of the public display of photographs for advertising and public information are well understood and the source of many attempts at ironic advertising, and the continued creation of teasers and self-conscious shrugs in order to remind us that the producers are also aware of their limited frame. In an interesting development, screened adverts and information – on the subway or street, in the airport or hospital – have begun to move. Something quite precise has taken place with the introduction of this looped but anxious potential – coming a little too late to inspire awe at the technological achievement. The development of robust screens has allowed for increasing placement of moving

images in exterior spaces that were previously vulnerable to weather or targeted destruction. The photographer’s search for clarity and desire for recognition in a flash – however displaced – has been substituted by the edit instead of the shutter click. The temporal edit has become the dominant moment of creative judgment – to such an extent that moving screened images now sometimes merely present existing television adverts – mutely playing silent unheard pleas from across an unbridgeable void – but at least they are moving. The edit as moment is informed by a shifting web-ish design structure. Gif-like, loopy and stupid – madly rehashing in an effort to gain attention. Unremarkable and with stunted progression – the illuminated moving image has become a secondary pop-up window locked into a reinforced structural frame that exceeds an increasingly distressed primary content. What it leaves behind is a new potential – the still image as a reverse signifier. Taking the form of the displayed still and routing it back away from its bulbous signification towards new subjectivities right at the moment that it is being superseded. The difference between restoration and renovation is the backdrop to this shifting array of images and the potential of the photographic still as a détourne. Both renovation and restoration – in that order – bring us away from the initial potential of a place while both suggest new moral codings. Renovation proposes the addition of values on top or in addition to the initial desire behind the construction of a place while restoration means striping back towards and often beyond the initial completed structure towards something close to the ‘true’ fabric of a structure. Grand Central Station in New York is often admired for a 1990s restoration – which brought its grand hall to a point that exceeded its original stark gravitas. Photos of the station pre-restoration are relatively hard to find outside of a few key moments such as the early days, during the second world war or in its last months prior to the stripping back and washing down. It is generally agreed that the station was in a state of ‘decline’ up to that point. Urban decline is preceded by renovation in subtle conflict with the future potential of restoration. The constant tension between renovation and

restoration means one or the other is always vying for a place in lieu or in excess of the original. Renovation and restoration are markers of growth and conscious pseudo-discursive development – pointed towards imagined desires conjured around the present or future users of a place or space. The many renovations of Grand Central prior to its final restoration included the construction of one dominant display in 1950. Namely the positioning of an enormous backlit display system on one of the balconies overlooking the main hall of the station. This 5 by 18 metre light-box was called the Kodak Colorama and carried images that were periodically changed to coincide with the seasons, a new product or an important event. The light-box was an enormous ‘still’ – sharper than any movie frame or digital display. Dominating these ‘moments’ the Colorama carried images of ‘normal’ families engaged in staged family stuff – being a family and being together within the frame of clarity and specific values during holiday time and in easy displays of pure familialism.3 When I look at photos of Grand Central just prior to its restoration and the Colorama beaming over the main hall, I think of Jyll Bradley’s photo-based work. When I now walk in the restored hall with its discrete Apple Store and Michael Jordan Grill I think of the absence of these defining super images of an America that existed as a backdrop to constructed desire. There was an enduring political and social program that put such illuminations into place but the most astonishing thing about them in retrospect is that they did not move. They were lit by internal light, they were enormous and they were always still. Staged action caught and fixed. I think about Bradley’s work because she is not straightforwardly oppositional to such structured displays – but she turns them back towards a new ordering of choice in relationships. Right at the point when the last of the Colorama photos was being put in place, Bradley started to occasionally deploy the transparency and its light-box towards the presentation of new forms of exchange – poetics and relationships beyond the familialism of the Colorama. Where the original Ektachromes had forefronted the traditional family unit, Bradley set out her initial works as an exploration of

two key aspects of relations between human beings – namely choice and friendship. These two related aspects of human contact place her original choice to use the medium in direct dialogue with a stridently normative structure that was fading out just as her images slunk into view. Bradley gently replaced the light-box form with new content and cut it down to size in soft opposition to the Grand Central display and others like it. Now there are new works. Further contracting the normative the images lie deep in recessed cases – shrinking back into their mounts – creating reflections on the glossy interiors. The new works draw you towards them. You look into them as well as at them. Unless the viewer is right in front of the work the printed photographic image is partially viewed at best. The light-boxes are modest and encourage the viewer to approach the work and close in. Choice and friendship are Bradley’s stated starting points. Choice and friendship are also her methodology and provide her subjects. Those who appear in the light-box works are close to each other and close to her. There is a proximity here that we are invited to be part of. We are faced with the chance to engage with personal relationships within and as part of the structure of the work yet beyond any traditional, normative illusion of familialism. The works do not loom over a grand hall and instead they create a real space of intimacy and reality. Donald Judd wrote about the difference between the illusion of things and real illusion. For him real illusion might come from the colored shadows produced by the juxtaposition of colored Plexiglas and aluminum, rather than the attempt to create the illusion of depth and shadow in traditional representational art. For Judd, it was the visual phenomena of the optical that was most important towards the creation of an art that could move towards some kind of truth beyond illusion in the service of ideology. Bradley’s new light boxes – with their complex reflections from her color transparencies – are clearly indebted to Judd’s structures, but they go further in denial of the possibility of a universalism of optics and truth values. Bradley replaces the self-contained optical relationships that create ‘interest’ in Judd with a display

of truth in relationships that is coded, subjective and rational in its beauty, generosity and revelation of difference and nonlinear poetics. Her work embraces display and forms of display – taking two key elements of illusion and placing them in proximity to provide a glimpse of new relational potentials.

1. From a telegram from photographer Edward Steichen to Kodak during the first year the Kodak Colorama was installed in Grand Central Station, New York, in 1950. Internet Source: www.eastmanhouse.org/tools/ pressroom/view.php?title=colorama-archive-2010 2. Felix Guattari, Becoming-Woman, from Chaosophy, Los Angeles, Semotext(e), 2009. 3. For an example of a feminist definition and critique of familialism see ‘Feminist Challenges to the New Familialism: Lifestyle Experimentation and the Freedom of Intimate Association’, Karen Struening, Hypatia, Vol. 11, No. 1, The Family and Feminist Theory (Winter, 1996).

Jyll Bradley 'The friend I have/is a passionate friend' 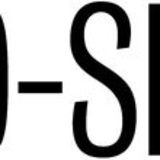