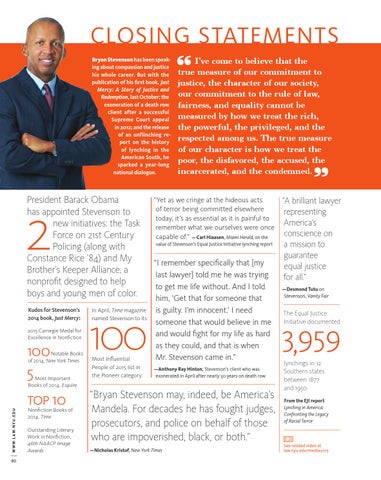 CLOSING STATEMENTS Bryan Stevenson has been speaking about compassion and justice his whole career. But with the publication of his first book, Just Mercy: A Story of Justice and Redemption, last October; the exoneration of a death row client after a successful Supreme Court appeal in 2012; and the release of an unflinching report on the history of lynching in the American South, he sparked a year-long national dialogue.

President Barack Obama has appointed Stevenson to new initiatives: the Task Force on 21st Century Policing (along with Constance Rice ’84) and My Brother’s Keeper Alliance, a nonprofit designed to help boys and young men of color.

Most Important Books of 2014, Esquire

In April, Time magazine named Stevenson to its

100 Most Influential People of 2015 list in the Pioneer category.

I’ve come to believe that the true measure of our commitment to justice, the character of our society, our commitment to the rule of law, fairness, and equality cannot be measured by how we treat the rich, the powerful, the privileged, and the respected among us. The true measure of our character is how we treat the poor, the disfavored, the accused, the incarcerated, and the condemned.

“Yet as we cringe at the hideous acts of terror being committed elsewhere today, it’s as essential as it is painful to remember what we ourselves were once capable of.” — Carl Hiaasen, Miami Herald, on the value of Stevenson’s Equal Justice Initiative lynching report

“I remember specifically that [my last lawyer] told me he was trying to get me life without. And I told him, ‘Get that for someone that is guilty. I’m innocent.’ I need someone that would believe in me and would fight for my life as hard as they could, and that is when Mr. Stevenson came in.” —Anthony Ray Hinton, Stevenson’s client who was exonerated in April after nearly 30 years on death row

“Bryan Stevenson may, indeed, be America’s Mandela. For decades he has fought judges, prosecutors, and police on behalf of those who are impoverished, black, or both.” —Nicholas Kristof, New York Times

“A brilliant lawyer representing America’s conscience on a mission to guarantee equal justice for all.” —Desmond Tutu on Stevenson, Vanity Fair

From the EJI report Lynching in America: Confronting the Legacy of Racial Terror