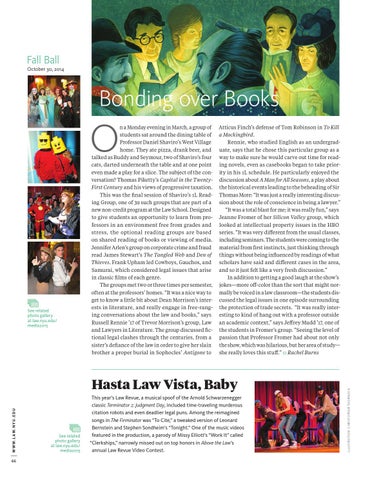 Atticus Finch’s defense of Tom Robinson in To Kill a Mockingbird. Rennie, who studied English as an undergraduate, says that he chose this particular group as a way to make sure he would carve out time for reading novels, even as casebooks began to take priority in his 1L schedule. He particularly enjoyed the discussion about A Man for All Seasons, a play about the historical events leading to the beheading of Sir Thomas More: “It was just a really interesting discussion about the role of conscience in being a lawyer.” “It was a total blast for me; it was really fun,” says Jeanne Fromer of her Silicon Valley group, which looked at intellectual property issues in the HBO series. “It was very different from the usual classes, including seminars. The students were coming to the material from first instincts, just thinking through things without being influenced by readings of what scholars have said and different cases in the area, and so it just felt like a very fresh discussion.” In addition to getting a good laugh at the show’s jokes—more off-color than the sort that might normally be voiced in a law classroom—the students discussed the legal issues in one episode surrounding the protection of trade secrets. “It was really interesting to kind of hang out with a professor outside an academic context,” says Jeffrey Mudd ’17, one of the students in Fromer’s group. “Seeing the level of passion that Professor Fromer had about not only the show, which was hilarious, but her area of study— she really loves this stuff.” Rachel Burns

This year’s Law Revue, a musical spoof of the Arnold Schwarzenegger classic Terminator 2: Judgment Day, included time-traveling murderous citation robots and even deadlier legal puns. Among the reimagined songs in The Firminator was “To Cite,” a tweaked version of Leonard Bernstein and Stephen Sondheim’s “Tonight.” One of the music videos featured in the production, a parody of Missy Elliott’s “Work It” called “Clerkships,” narrowly missed out on top honors in Above the Law’s annual Law Revue Video Contest.

n a Monday evening in March, a group of students sat around the dining table of Professor Daniel Shaviro’s West Village home. They ate pizza, drank beer, and talked as Buddy and Seymour, two of Shaviro’s four cats, darted underneath the table and at one point even made a play for a slice. The subject of the conversation? Thomas Piketty’s Capital in the TwentyFirst Century and his views of progressive taxation. This was the final session of Shaviro’s 1L Reading Group, one of 39 such groups that are part of a new non-credit program at the Law School. Designed to give students an opportunity to learn from professors in an environment free from grades and stress, the optional reading groups are based on shared reading of books or viewing of media. Jennifer Arlen’s group on corporate crime and fraud read James Stewart’s The Tangled Web and Den of Thieves. Frank Upham led Cowboys, Gauchos, and Samurai, which considered legal issues that arise in classic films of each genre. The groups met two or three times per semester, often at the professors’ homes. “It was a nice way to get to know a little bit about Dean Morrison’s interests in literature, and really engage in free-ranging conversations about the law and books,” says Russell Rennie ’17 of Trevor Morrison’s group, Law and Lawyers in Literature. The group discussed fictional legal clashes through the centuries, from a sister’s defiance of the law in order to give her slain brother a proper burial in Sophocles’ Antigone to