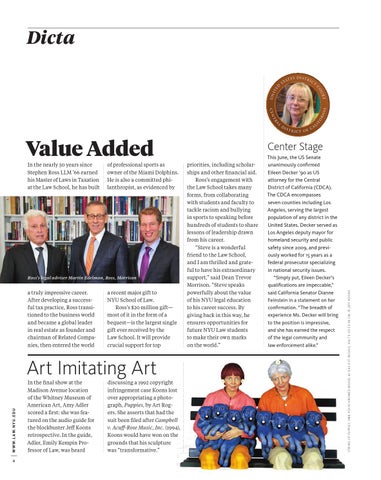 Value Added of professional sports as owner of the Miami Dolphins. He is also a committed philanthropist, as evidenced by

a truly impressive career. After developing a successful tax practice, Ross transitioned to the business world and became a global leader in real estate as founder and chairman of Related Companies, then entered the world

a recent major gift to NYU School of Law. Ross’s $20 million gift— most of it in the form of a bequest—is the largest single gift ever received by the Law School. It will provide crucial support for top

In the final show at the Madison Avenue location of the Whitney Museum of American Art, Amy Adler scored a first: she was featured on the audio guide for the blockbuster Jeff Koons retrospective. In the guide, Adler, Emily Kempin Professor of Law, was heard

discussing a 1992 copyright infringement case Koons lost over appropriating a photograph, Puppies, by Art Rogers. She asserts that had the suit been filed after Campbell v. Acuff-Rose Music, Inc. (1994), Koons would have won on the grounds that his sculpture was “transformative.”

A TRICT OF C

Center Stage priorities, including scholarships and other financial aid. Ross’s engagement with the Law School takes many forms, from collaborating with students and faculty to tackle racism and bullying in sports to speaking before hundreds of students to share lessons of leadership drawn from his career. “Steve is a wonderful friend to the Law School, and I am thrilled and grateful to have his extraordinary support,” said Dean Trevor Morrison. “Steve speaks powerfully about the value of his NYU legal education to his career success. By giving back in this way, he ensures opportunities for future NYU Law students to make their own marks on the world.”

This June, the US Senate unanimously confirmed Eileen Decker ’90 as US attorney for the Central District of California (CDCA). The CDCA encompasses seven counties including Los Angeles, serving the largest population of any district in the United States. Decker served as Los Angeles deputy mayor for homeland security and public safety since 2009, and previously worked for 15 years as a federal prosecutor specializing in national security issues. “Simply put, Eileen Decker’s qualifications are impeccable,” said California Senator Dianne Feinstein in a statement on her confirmation. “The breadth of experience Ms. Decker will bring to the position is impressive, and she has earned the respect of the legal community and law enforcement alike.”

In the nearly 50 years since Stephen Ross LLM ’66 earned his Master of Laws in Taxation at the Law School, he has built