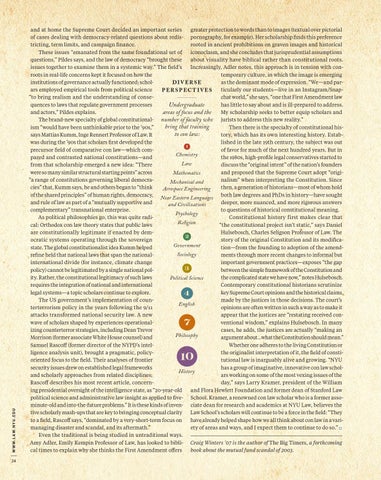 and at home the Supreme Court decided an important series greater protection to words than to images (textual over pictorial of cases dealing with democracy-related questions about redis- pornography, for example). Her scholarship finds this preference tricting, term limits, and campaign finance. rooted in ancient prohibitions on graven images and historical These issues “emanated from the same foundational set of iconoclasm, and she concludes that jurisprudential assumptions questions,” Pildes says, and the law of democracy “brought these about visuality have biblical rather than constitutional roots. issues together to examine them in a systemic way.” The field’s Increasingly, Adler notes, this approach is in tension with conroots in real-life concerns kept it focused on how the temporary culture, in which the image is emerging diverse institutions of governance actually functioned; scholas the dominant mode of expression. “We—and parars employed empirical tools from political science perspectives ticularly our students—live in an Instagram/Snap“to bring realism and the understanding of consechat world,” she says, “one that First Amendment law quences to laws that regulate government processes has little to say about and is ill-prepared to address. Undergraduate areas of focus and the My scholarship seeks to better equip scholars and and actors,” Pildes explains. jurists to address this new reality.” The brand-new specialty of global constitutional- number of faculty who bring that training Then there is the specialty of constitutional hisism “would have been unthinkable prior to the ’90s,” to con law: says Mattias Kumm, Inge Rennert Professor of Law. It tory, which has its own interesting history. Estabwas during the ’90s that scholars first developed the lished in the late 19th century, the subject was out 1 precursor field of comparative con law—which comof favor for much of the next hundred years. But in Chemistry pared and contrasted national constitutions—and the 1980s, high-profile legal conservatives started to Law from that scholarship emerged a new idea: “There discuss the “original intent” of the nation’s founders were so many similar structural starting points” across and proposed that the Supreme Court adopt “origiMathematics “a range of constitutions governing liberal democranalism” when interpreting the Constitution. Since Mechanical and cies” that, Kumm says, he and others began to “think then, a generation of historians—most of whom hold Aerospace Engineering of the shared principles” of human rights, democracy, both law degrees and PhDs in history—have sought Near Eastern Languages and rule of law as part of a “mutually supportive and deeper, more nuanced, and more rigorous answers and Civilizations complementary” transnational enterprise. to questions of historical constitutional meaning. Psychology As political philosophies go, this was quite radiConstitutional history first makes clear that Religion cal: Orthodox con law theory states that public laws “the constitutional project isn’t static,” says Daniel are constitutionally legitimate if enacted by demHulsebosch, Charles Seligson Professor of Law. The 2 story of the original Constitution and its modificaocratic systems operating through the sovereign Government state. The global constitutionalist idea Kumm helped tion—from the founding to adoption of the amendSociology refine held that national laws that span the nationalments through more recent changes to informal but international divide (for instance, climate change important government practices—exposes “the gap 3 policy) cannot be legitimated by a single national polbetween the simple framework of the Constitution and ity. Rather, the constitutional legitimacy of such laws the complicated state we have now,” notes Hulsebosch. Political Science requires the integration of national and international Contemporary constitutional historians scrutinize legal systems—a topic scholars continue to explore. key Supreme Court opinions and the historical claims 4 The US government’s implementation of counmade by the justices in those decisions. The court’s English terterrorism policy in the years following the 9/11 opinions are often written in such a way as to make it appear that the justices are “restating received conattacks transformed national security law. A new wave of scholars shaped by experiences operationalventional wisdom,” explains Hulsebosch. In many izing counterterror strategies, including Dean Trevor cases, he adds, the justices are actually “making an Philosophy Morrison (former associate White House counsel) and argument about…what the Constitution should mean.” Samuel Rascoff (former director of the NYPD’s intelWhether one adheres to the living Constitution or ligence analysis unit), brought a pragmatic, policythe originalist interpretation of it, the field of constioriented focus to the field. Their analyses of frontier tutional law is inarguably alive and growing. “NYU security issues drew on established legal frameworks has a group of imaginative, innovative con law scholHistory and scholarly approaches from related disciplines; ars working on some of the most vexing issues of the Rascoff describes his most recent article, concernday,” says Larry Kramer, president of the William ing presidential oversight of the intelligence state, as “20-year-old and Flora Hewlett Foundation and former dean of Stanford Law political science and administrative law insight as applied to five- School. Kramer, a renowned con law scholar who is a former assominute-old and into-the-future problems.” It is these kinds of inven- ciate dean for research and academics at NYU Law, believes the tive scholarly mash-ups that are key to bringing conceptual clarity Law School’s scholars will continue to be a force in the field: “They to a field, Rascoff says, “dominated by a very-short-term focus on have already helped shape how we all think about con law in a variety of areas and ways, and I expect them to continue to do so.” managing disaster and scandal, and its aftermath.” Even the traditional is being studied in untraditional ways. Amy Adler, Emily Kempin Professor of Law, has looked to bibli- Craig Winters ’07 is the author of The Big Timers, a forthcoming cal times to explain why she thinks the First Amendment offers book about the mutual fund scandal of 2003.