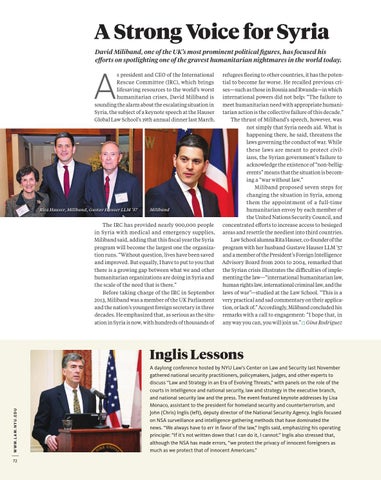 A Strong Voice for Syria David Miliband, one of the UK’s most prominent political figures, has focused his efforts on spotlighting one of the gravest humanitarian nightmares in the world today.

s president and CEO of the International Rescue Committee (IRC), which brings lifesaving resources to the world’s worst humanitarian crises, David Miliband is sounding the alarm about the escalating situation in Syria, the subject of a keynote speech at the Hauser Global Law School’s 19th annual dinner last March.

The IRC has provided nearly 900,000 people in Syria with medical and emergency supplies, Miliband said, adding that this fiscal year the Syria program will become the largest one the organization runs. “Without question, lives have been saved and improved. But equally, I have to put to you that there is a growing gap between what we and other humanitarian organizations are doing in Syria and the scale of the need that is there.” Before taking charge of the IRC in September 2013, Miliband was a member of the UK Parliament and the nation’s youngest foreign secretary in three decades. He emphasized that, as serious as the situation in Syria is now, with hundreds of thousands of

refugees fleeing to other countries, it has the potential to become far worse. He recalled previous crises—such as those in Bosnia and Rwanda—in which international powers did not help: “The failure to meet humanitarian need with appropriate humanitarian action is the collective failure of this decade.” The thrust of Miliband’s speech, however, was not simply that Syria needs aid. What is happening there, he said, threatens the laws governing the conduct of war. While these laws are meant to protect civilians, the Syrian government’s failure to acknowledge the existence of “non-belligerents” means that the situation is becoming a “war without law.” Miliband proposed seven steps for changing the situation in Syria, among them the appointment of a full-time humanitarian envoy by each member of the United Nations Security Council, and concentrated efforts to increase access to besieged areas and resettle the neediest into third countries. Law School alumna Rita Hauser, co-founder of the program with her husband Gustave Hauser LLM ’57 and a member of the President’s Foreign Intelligence Advisory Board from 2001 to 2004, remarked that the Syrian crisis illustrates the difficulties of implementing the law—“international humanitarian law, human rights law, international criminal law, and the laws of war”—studied at the Law School. “This is a very practical and sad commentary on their application, or lack of.” Accordingly, Miliband concluded his remarks with a call to engagement: “I hope that, in any way you can, you will join us.” Gina Rodriguez

A daylong conference hosted by NYU Law’s Center on Law and Security last November gathered national security practitioners, policymakers, judges, and other experts to discuss “Law and Strategy in an Era of Evolving Threats,” with panels on the role of the courts in intelligence and national security, law and strategy in the executive branch, and national security law and the press. The event featured keynote addresses by Lisa Monaco, assistant to the president for homeland security and counterterrorism, and John (Chris) Inglis (left), deputy director of the National Security Agency. Inglis focused on NSA surveillance and intelligence-gathering methods that have dominated the news. “We always have to err in favor of the law,” Inglis said, emphasizing his operating principle: “If it’s not written down that I can do it, I cannot.” Inglis also stressed that, although the NSA has made errors, “we protect the privacy of innocent foreigners as much as we protect that of innocent Americans.”