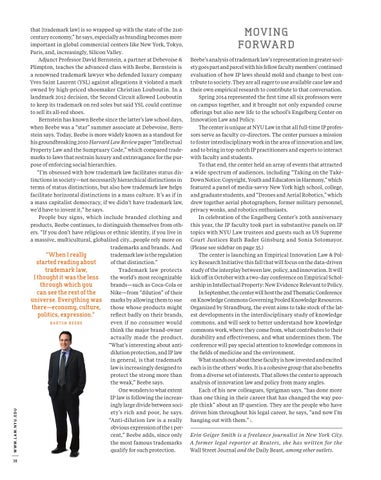 that [trademark law] is so wrapped up with the state of the 21stcentury economy,” he says, especially as branding becomes more important in global commercial centers like New York, Tokyo, Paris, and, increasingly, Silicon Valley. Adjunct Professor David Bernstein, a partner at Debevoise &amp; Plimpton, teaches the advanced class with Beebe. Bernstein is a renowned trademark lawyer who defended luxury company Yves Saint Laurent (YSL) against allegations it violated a mark owned by high-priced shoemaker Christian Louboutin. In a landmark 2012 decision, the Second Circuit allowed Louboutin to keep its trademark on red soles but said YSL could continue to sell its all-red shoes. Bernstein has known Beebe since the latter’s law school days, when Beebe was a “star” summer associate at Debevoise, Bernstein says. Today, Beebe is more widely known as a standout for his groundbreaking 2010 Harvard Law Review paper “Intellectual Property Law and the Sumptuary Code,” which compared trademarks to laws that restrain luxury and extravagance for the purpose of enforcing social hierarchies. “I’m obsessed with how trademark law facilitates status distinctions in society—not necessarily hierarchical distinctions in terms of status distinctions, but also how trademark law helps facilitate horizontal distinctions in a mass culture. It’s as if in a mass capitalist democracy, if we didn’t have trademark law, we’d have to invent it,” he says. People buy signs, which include branded clothing and products, Beebe continues, to distinguish themselves from others. “If you don’t have religious or ethnic identity, if you live in a massive, multicultural, globalized city…people rely more on trademarks and brands. And “When I really trademark law is the regulation started reading about of that distinction.”  trademark law, Trademark law protects I thought it was the lens the world’s most recognizable through which you brands—such as Coca-Cola or can see the rest of the Nike—from “dilution” of their universe. Everything was marks by allowing them to sue there—economy, culture, those whose products might politics, expression.” reflect badly on their brands, BA RTO N B E E B E even if no consumer would think the major brand-owner actually made the product. “What’s interesting about antidilution protection, and IP law in general, is that trademark law is increasingly designed to protect the strong more than the weak,” Beebe says. One wonders to what extent IP law is following the increasingly large divide between society’s rich and poor, he says. “Anti-dilution law is a really obvious expression of the 1 percent,” Beebe adds, since only the most famous trademarks qualify for such protection.

MOVI NG FO RWAR D Beebe’s analysis of trademark law’s representation in greater society goes part and parcel with his fellow faculty members’ continued evaluation of how IP laws should mold and change to best contribute to society. They are all eager to use available case law and their own empirical research to contribute to that conversation. Spring 2014 represented the first time all six professors were on campus together, and it brought not only expanded course offerings but also new life to the school’s Engelberg Center on Innovation Law and Policy. The center is unique at NYU Law in that all full-time IP professors serve as faculty co-directors. The center pursues a mission to foster interdisciplinary work in the area of innovation and law, and to bring in top-notch IP practitioners and experts to interact with faculty and students. To that end, the center held an array of events that attracted a wide spectrum of audiences, including “Taking on the TakeDown Notice: Copyright, Youth and Educators in Harmony,” which featured a panel of media-savvy New York high school, college, and graduate students, and “Drones and Aerial Robotics,” which drew together aerial photographers, former military personnel, privacy wonks, and robotics enthusiasts. In celebration of the Engelberg Center’s 20th anniversary this year, the IP faculty took part in substantive panels on IP topics with NYU Law trustees and guests such as US Supreme Court Justices Ruth Bader Ginsburg and Sonia Sotomayor. (Please see sidebar on page 35.) The center is launching an Empirical Innovation Law &amp; Policy Research Initiative this fall that will focus on the data-driven study of the interplay between law, policy, and innovation. It will kick off in October with a two-day conference on Empirical Scholarship in Intellectual Property: New Evidence Relevant to Policy. In September, the center will host the 2nd Thematic Conference on Knowledge Commons Governing Pooled Knowledge Resources. Organized by Strandburg, the event aims to take stock of the latest developments in the interdisciplinary study of knowledge commons, and will seek to better understand how knowledge commons work, where they come from, what contributes to their durability and effectiveness, and what undermines them. The conference will pay special attention to knowledge commons in the fields of medicine and the environment. What stands out about these faculty is how invested and excited each is in the others’ works. It is a cohesive group that also benefits from a diverse set of interests. That allows the center to approach analysis of innovation law and policy from many angles. Each of his new colleagues, Sprigman says, “has done more than one thing in their career that has changed the way people think” about an IP question. They are the people who have driven him throughout his legal career, he says, “and now I’m hanging out with them.” n Erin Geiger Smith is a freelance journalist in New York City. A former legal reporter at Reuters, she has written for the Wall Street Journal and the Daily Beast, among other outlets.