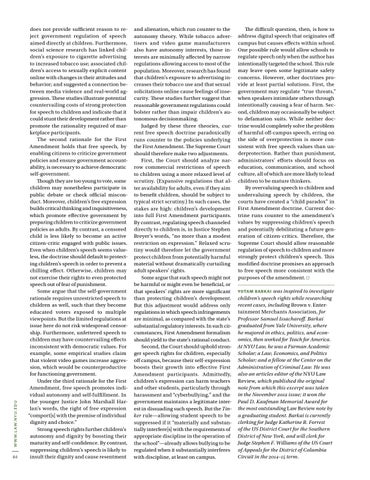 does not provide sufficient reason to reject government regulation of speech aimed directly at children. Furthermore, social science research has linked children’s exposure to cigarette advertising to increased tobacco use; associated children’s access to sexually explicit content online with changes in their attitudes and behavior; and suggested a connection between media violence and real-world aggression. These studies illustrate potential countervailing costs of strong protection for speech to children and indicate that it could stunt their development rather than promote the rationality required of marketplace participants. The second rationale for the First Amendment holds that free speech, by enabling citizens to criticize government policies and ensure government accountability, is necessary to achieve democratic self-government. Though they are too young to vote, some children may nonetheless participate in public debate or check official misconduct. Moreover, children’s free expression builds critical thinking and inquisitiveness, which promote effective government by preparing children to criticize government policies as adults. By contrast, a censored child is less likely to become an active citizen-critic engaged with public issues. Even when children’s speech seems valueless, the doctrine should default to protecting children’s speech in order to prevent a chilling effect. Otherwise, children may not exercise their rights to even protected speech out of fear of punishment. Some argue that the self-government rationale requires unrestricted speech to children as well, such that they become educated voters exposed to multiple viewpoints. But the limited regulations at issue here do not risk widespread censorship. Furthermore, unfettered speech to children may have countervailing effects inconsistent with democratic values. For example, some empirical studies claim that violent video games increase aggression, which would be counterproductive for functioning government. Under the third rationale for the First Amendment, free speech promotes individual autonomy and self-fulfillment. In the younger Justice John Marshall Harlan’s words, the right of free expression “comport[s] with the premise of individual dignity and choice.” Strong speech rights further children’s autonomy and dignity by boosting their maturity and self-confidence. By contrast, suppressing children’s speech is likely to insult their dignity and cause resentment

and alienation, which run counter to the autonomy theory. While tobacco advertisers and video game manufacturers also have autonomy interests, those interests are minimally affected by narrow regulations allowing access to most of the population. Moreover, research has found that children’s exposure to advertising increases their tobacco use and that sexual solicitations online cause feelings of insecurity. These studies further suggest that reasonable government regulations could bolster rather than impair children’s autonomous decisionmaking. Judged by these three theories, current free speech doctrine paradoxically runs counter to the policies underlying the First Amendment. The Supreme Court should therefore make two adjustments. First, the Court should analyze narrow commercial restrictions of speech to children using a more relaxed level of scrutiny. (Expansive regulations that alter availability for adults, even if they aim to benefit children, should be subject to typical strict scrutiny.) In such cases, the stakes are high: children’s development into full First Amendment participants. By contrast, regulating speech channeled directly to children is, in Justice Stephen Breyer’s words, “no more than a modest restriction on expression.” Relaxed scrutiny would therefore let the government protect children from potentially harmful material without dramatically curtailing adult speakers’ rights. Some argue that such speech might not be harmful or might even be beneficial, or that speakers’ rights are more significant than protecting children’s development. But this adjustment would address only regulations in which speech infringements are minimal, as compared with the state’s substantial regulatory interests. In such circumstances, First Amendment formalism should yield to the state’s rational conduct. Second, the Court should uphold stronger speech rights for children, especially off campus, because their self-expression boosts their growth into effective First Amendment participants. Admittedly, children’s expression can harm teachers and other students, particularly through harassment and “cyberbullying,” and the government maintains a legitimate interest in dissuading such speech. But the Tinker rule—allowing student speech to be suppressed if it “materially and substantially interfere[s] with the requirements of appropriate discipline in the operation of the school”—already allows bullying to be regulated when it substantially interferes with discipline, at least on campus.

The difficult question, then, is how to address digital speech that originates off campus but causes effects within school. One possible rule would allow schools to regulate speech only when the author has intentionally targeted the school. This rule may leave open some legitimate safety concerns. However, other doctrines provide at least partial solutions. First, the government may regulate “true threats,” when speakers intimidate others through intentionally causing a fear of harm. Second, children may occasionally be subject to defamation suits. While neither doctrine would completely solve the problem of harmful off-campus speech, erring on the side of overprotection is more consistent with free speech values than underprotection. Rather than punishment, administrators’ efforts should focus on education, communication, and school culture, all of which are more likely to lead children to be mature thinkers. By overvaluing speech to children and undervaluing speech by children, the courts have created a “child paradox” in First Amendment doctrine. Current doctrine runs counter to the amendment’s values by suppressing children’s speech and potentially debilitating a future generation of citizen-critics. Therefore, the Supreme Court should allow reasonable regulation of speech to children and more strongly protect children’s speech. This modified doctrine promises an approach to free speech more consistent with the purposes of the amendment. yotam barkai was inspired to investigate children’s speech rights while researching recent cases, including Brown v. Entertainment Merchants Association, for Professor Samuel Issacharoff. Barkai graduated from Yale University, where he majored in ethics, politics, and economics, then worked for Teach for America. At NYU Law, he was a Furman Academic Scholar; a Law, Economics, and Politics Scholar; and a fellow at the Center on the Administration of Criminal Law. He was also an articles editor of the NYU Law Review, which published the original note from which this excerpt was taken in the November 2012 issue; it won the Paul D. Kaufman Memorial Award for the most outstanding Law Review note by a graduating student. Barkai is currently clerking for Judge Katherine B. Forrest of the US District Court for the Southern District of New York, and will clerk for Judge Stephen F. Williams of the US Court of Appeals for the District of Columbia Circuit in the 2014–15 term.