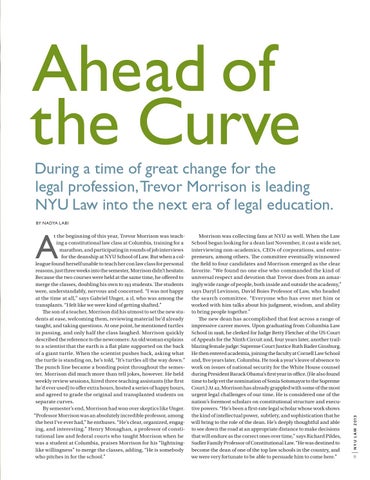 During a time of great change for the legal profession, Trevor Morrison is leading NYU Law into the next era of legal education. Morrison was collecting fans at NYU as well. When the Law School began looking for a dean last November, it cast a wide net, interviewing non-academics, CEOs of corporations, and entrepreneurs, among others. The committee eventually winnowed the field to four candidates and Morrison emerged as the clear favorite. “We found no one else who commanded the kind of universal respect and devotion that Trevor does from an amazingly wide range of people, both inside and outside the academy,” says Daryl Levinson, David Boies Professor of Law, who headed the search committee. “Everyone who has ever met him or worked with him talks about his judgment, wisdom, and ability to bring people together.” The new dean has accomplished that feat across a range of impressive career moves. Upon graduating from Columbia Law School in 1998, he clerked for Judge Betty Fletcher of the US Court of Appeals for the Ninth Circuit and, four years later, another trailblazing female judge: Supreme Court Justice Ruth Bader Ginsburg. He then entered academia, joining the faculty at Cornell Law School and, five years later, Columbia. He took a year’s leave of absence to work on issues of national security for the White House counsel during President Barack Obama’s first year in office. (He also found time to help vet the nomination of Sonia Sotomayor to the Supreme Court.) At 42, Morrison has already grappled with some of the most urgent legal challenges of our time. He is considered one of the nation’s foremost scholars on constitutional structure and executive powers. “He’s been a first-rate legal scholar whose work shows the kind of intellectual power, subtlety, and sophistication that he will bring to the role of the dean. He’s deeply thoughtful and able to see down the road at an appropriate distance to make decisions that will endure as the correct ones over time,” says Richard Pildes, Sudler Family Professor of Constitutional Law. “He was destined to become the dean of one of the top law schools in the country, and we were very fortunate to be able to persuade him to come here.”

t the beginning of this year, Trevor Morrison was teaching a constitutional law class at Columbia, training for a marathon, and participating in rounds of job interviews for the deanship at NYU School of Law. But when a colleague found herself unable to teach her con law class for personal reasons, just three weeks into the semester, Morrison didn’t hesitate. Because the two courses were held at the same time, he offered to merge the classes, doubling his own to 193 students. The students were, understandably, nervous and concerned. “I was not happy at the time at all,” says Gabriel Unger, a 1L who was among the transplants. “I felt like we were kind of getting shafted.” The son of a teacher, Morrison did his utmost to set the new students at ease, welcoming them, reviewing material he’d already taught, and taking questions. At one point, he mentioned turtles in passing, and only half the class laughed. Morrison quickly described the reference to the newcomers: An old woman explains to a scientist that the earth is a flat plate supported on the back of a giant turtle. When the scientist pushes back, asking what the turtle is standing on, he’s told, “It’s turtles all the way down.” The punch line became a bonding point throughout the semester. Morrison did much more than tell jokes, however. He held weekly review sessions, hired three teaching assistants (the first he’d ever used) to offer extra hours, hosted a series of happy hours, and agreed to grade the original and transplanted students on separate curves. By semester’s end, Morrison had won over skeptics like Unger. “Professor Morrison was an absolutely incredible professor, among the best I’ve ever had,” he enthuses. “He’s clear, organized, engaging, and interesting.” Henry Monaghan, a professor of constitutional law and federal courts who taught Morrison when he was a student at Columbia, praises Morrison for his “lightninglike willingness” to merge the classes, adding, “He is somebody who pitches in for the school.”