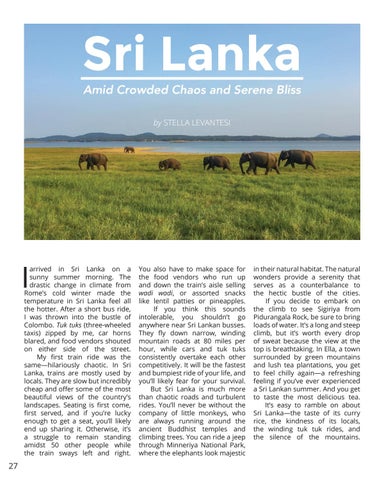 arrived in Sri Lanka on a sunny summer morning. The drastic change in climate from Rome’s cold winter made the temperature in Sri Lanka feel all the hotter. After a short bus ride, I was thrown into the bustle of Colombo. Tuk tuks (three-wheeled taxis) zipped by me, car horns blared, and food vendors shouted on either side of the street. My first train ride was the same—hilariously chaotic. In Sri Lanka, trains are mostly used by locals. They are slow but incredibly cheap and offer some of the most beautiful views of the country’s landscapes. Seating is first come, first served, and if you’re lucky enough to get a seat, you’ll likely end up sharing it. Otherwise, it’s a struggle to remain standing amidst 50 other people while the train sways left and right.

You also have to make space for the food vendors who run up and down the train’s aisle selling wadi wadi, or assorted snacks like lentil patties or pineapples. If you think this sounds intolerable, you shouldn’t go anywhere near Sri Lankan busses. They fly down narrow, winding mountain roads at 80 miles per hour, while cars and tuk tuks consistently overtake each other competitively. It will be the fastest and bumpiest ride of your life, and you’ll likely fear for your survival. But Sri Lanka is much more than chaotic roads and turbulent rides. You’ll never be without the company of little monkeys, who are always running around the ancient Buddhist temples and climbing trees. You can ride a jeep through Minneriya National Park, where the elephants look majestic

in their natural habitat. The natural wonders provide a serenity that serves as a counterbalance to the hectic bustle of the cities. If you decide to embark on the climb to see Sigiriya from Pidurangala Rock, be sure to bring loads of water. It’s a long and steep climb, but it’s worth every drop of sweat because the view at the top is breathtaking. In Ella, a town surrounded by green mountains and lush tea plantations, you get to feel chilly again—a refreshing feeling if you’ve ever experienced a Sri Lankan summer. And you get to taste the most delicious tea. It’s easy to ramble on about Sri Lanka—the taste of its curry rice, the kindness of its locals, the winding tuk tuk rides, and the silence of the mountains.

Baedeker strives to connect readers with incredible people and places around the globe, as well as present stories and images from diverse and unique destinations. Our print magazine showcases travel writing and photography from all corners of the globe that is submitted by NYU students. 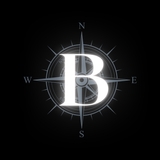