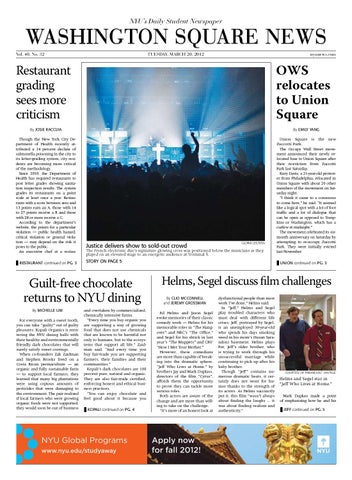 Though the New York City Department of Health recently attributed a 14 percent decline of salmonella poisoning in the city to its letter-grading system, city residents are becoming more critical of the methodology. Since 2010, the Department of Health has required restaurants to post letter grades showing sanitation inspection results. The system grades its restaurants on a point scale at least once a year. Restaurants with a score between zero and 13 points earn an A, those with 14 to 27 points receive a B and those with 28 or more receive a C. According to the department’s website, the points for a particular violation — public health hazard, critical violation or general violation — may depend on the risk it poses to the public. An executive chef at a restau-

Union Square is the new Zuccotti Park. The Occupy Wall Street movement announced their newly relocated base to Union Square after their re-eviction from Zuccotti Park last Saturday. Kavy Davis, a 21-year-old protester from Philadelphia, relocated in Union Square with about 20 other members of the movement on Saturday night. “I think it came to a consensus to come here,” he said. “It seemed like a logical spot with a lot of foot traffic and a lot of dialogue that can be open as opposed to Tompkins or Washington, which has a curfew at midnight.” The movement celebrated its sixmonth anniversary on Saturday by attempting to re-occupy Zuccotti Park. They were initially evicted last November.

The French electronic duo’s signiature glowing cross was positioned below the musicians as they played on an elevated stage to an energetic audience at Terminal 5.

For everyone with a sweet tooth, you can take “guilty” out of guilty pleasures. Kopali Organics is reentering the NYU dining halls with their healthy and environmentally friendly dark chocolates that will surely satisfy sweet cravings. When co-founders Zak Zaidman and Stephen Brooks lived on a Costa Rican permaculture — an organic and fully sustainable farm — to support local farmers, they learned that many big plantations were using copious amounts of pesticides that were damaging to the environment. The pair realized if local farmers who were growing organic foods were not supported, they would soon be out of business

and overtaken by commercialized, chemically intensive farms. “Every time you buy organic you are supporting a way of growing food that does not use chemicals that are known to be harmful not only to humans, but to the ecosystems that support all life,” Zaidman said. “And every time you buy fair-trade you are supporting farmers, their families and their communities.” Kopali’s dark chocolates are 100 percent pure, natural and organic. They are also fair-trade certified, enforcing honest and ethical business practices. “You can enjoy chocolate and feel good about it because you

Helms, Segel discuss film challenges By Clio McConnell and Jeremy Grossman Ed Helms and Jason Segel evoke memories of their classic comedy work — Helms for his memorable roles in “The Hangover” and NBC’s “The Office,” and Segel for his shtick in last year’s “The Muppets” and CBS’ “How I Met Your Mother.” However, these comedians are more than capable of breaking into the dramatic sphere. “Jeff Who Lives at Home,” by brothers Jay and Mark Duplass, directors of the film “Cyrus”, affords them the opportunity to prove they can tackle more serious roles. Both actors are aware of the change and are more than willing to take on the challenge. “It’s more of an honest look at

dysfunctional people than most work I’ve done,” Helms said. In “Jeff,” Helms and Segel play troubled characters who must deal with different life crises. Jeff, portrayed by Segel, is an unemployed 30-year-old who spends his days smoking weed in his mom’s (Susan Sarandon) basement. Helms plays Pat, Jeff’s older brother, who is trying to work through his unsuccessful marriage while continuing to pick up after his baby brother. Though “Jeff” contains numerous dramatic beats, it certainly does not wont for humor thanks to the strength of its actors. As Helms succinctly put it, this film “wasn’t always about finding the laughs ... it was about finding realism and authenticity.”

Helms and Segel star in “Jeff Who Lives at Home.” Mark Duplass made a point of emphasizing how he and his 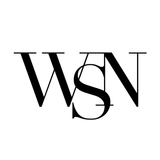