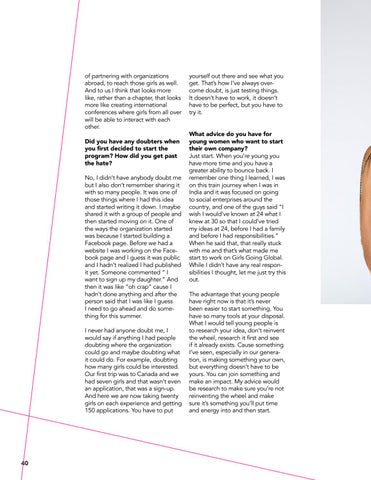 of partnering with organizations abroad, to reach those girls as well. And to us I think that looks more like, rather than a chapter, that looks more like creating international conferences where girls from all over will be able to interact with each other. Did you have any doubters when you first decided to start the program? How did you get past the hate? No, I didn’t have anybody doubt me but I also don’t remember sharing it with so many people. It was one of those things where I had this idea and started writing it down. I maybe shared it with a group of people and then started moving on it. One of the ways the organization started was because I started building a Facebook page. Before we had a website I was working on the Facebook page and I guess it was public and I hadn’t realized I had published it yet. Someone commented “ I want to sign up my daughter.” And then it was like “oh crap” cause I hadn’t done anything and after the person said that I was like I guess I need to go ahead and do something for this summer. I never had anyone doubt me, I would say if anything I had people doubting where the organization could go and maybe doubting what it could do. For example, doubting how many girls could be interested. Our first trip was to Canada and we had seven girls and that wasn’t even an application, that was a sign-up. And here we are now taking twenty girls on each experience and getting 150 applications. You have to put

yourself out there and see what you get. That’s how I’ve always overcome doubt, is just testing things. It doesn’t have to work, it doesn’t have to be perfect, but you have to try it. What advice do you have for young women who want to start their own company? Just start. When you’re young you have more time and you have a greater ability to bounce back. I remember one thing I learned, I was on this train journey when I was in India and it was focused on going to social enterprises around the country, and one of the guys said “I wish I would’ve known at 24 what I knew at 30 so that I could’ve tried my ideas at 24, before I had a family and before I had responsibilities.” When he said that, that really stuck with me and that’s what made me start to work on Girls Going Global. While I didn’t have any real responsibilities I thought, let me just try this out. The advantage that young people have right now is that it’s never been easier to start something. You have so many tools at your disposal. What I would tell young people is to research your idea, don’t reinvent the wheel, research it first and see if it already exists. Cause something I’ve seen, especially in our generation, is making something your own, but everything doesn’t have to be yours. You can join something and make an impact. My advice would be research to make sure you’re not reinventing the wheel and make sure it’s something you’ll put time and energy into and then start. 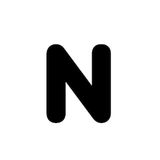