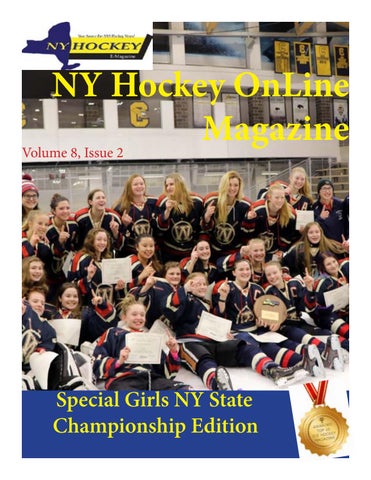 Letter From the Editor

Dear Reader, This is a special project Janet decided to do in order to share the many photos from the NYS Girls Varsity Ice Hockey Championships held at Harborcenter in Buffalo. It was a very special weekend with lots of great hockey action, but even more some great interaction among players, coaches, parents, friends and family. We hope you enjoy this recap and congratulate all four teams on giving us a great hockey showcase weekend. All photos were taken by Janet Schultz of NYHOL and are copyrighted. Anyone wishing prints should contact Janet at Janet@nyhockeyonline.com Sincerely, Randy Schultz Publisher/Writer NY Hockey Online EMagazine

The NY State Girls Ice Hockey Regional Championship opened Friday, February 8 at Harborcenter in Buffalo, NY with Potsdam taking on Williamsville. This is called a Regional game because not every section of NYS has a girls varsity league. Williamsville got on the boards at 8:01 of the first period when Forward Jenna Cavalieri scored with assists from Samantha Ingham and Elisabeth Sidorski. Both goaltenders, Elizabeth Timby for Williamsville and Coryn Young for Potsdam faced 8 shots each. The period ended 1-0 in favor of host Wiliamsville Williamsville opened scoring in the second period when Emma Roland scored, assisted by Ella Huntley at 7:16 and the 2-0 score remained through the second. Five minutes into the third, Williamsville got on the boards again on a powerplay goal by Sidorski, assisted by Cavalieri. A minute later Roland scored an unassisted goal. The fifth goal of the game was scored by Roland, unassisted and shorthanded. Not to be totally outdone, Potsdam answered back with Kennedy Emerson scoring on the powerplay, while Williamsville had two players in the penalty box. With a minute left and teams at even strength Williamsville’s Cavalieri scored, assisted by Vanessa Willick and the Williamsville team won 6-1 and moved on to the Championship round. Potsdam’s Kennedy Emerson was awarded the Sportsmanship Award for Game 1. Emma Roland had a hattrick. Following the game Roland met with the media and complimented her team on the good they done and they planned to enjoy the evening, get a good night’s rest and be ready for tomorrow.

Game 2 Skaneateles (III) vs Plattsburgh (VII) Game 2 featured Skaneateles against Plattsburgh. In goal for Skaneateles was Evie Sheridan and for Plattsburgh, Ava Julian. The game was filled with back and forth action but after two periods there was no score. Goalies faced 8 shots on goal for Plattsburgh and 4 for Skaneateles after one period and Plattsburgh faced 7 and Skaneateles 3 after the second period. Skaneateles came out determined and with 1:38 into the third Lizzy Sachar scored, assisted by Sophia Burns and Ioanna Christou. Megan Teachout’s presence was known and she further made it known when she scored an unassisted goal and was followed by Sophia Burns scoring an unassisted goal making the score 3-0 at the end of three periods. Skaneateles would go on to face Williamsville in the Championship. A slight rematch as Skaneateles lost to Section VI ‘s Frontier/Lakeshore/Orchard Park last year in the Championship. Plattsburgh’s McKenzie Brown took home the Sportsmanship Honor.

Skaneateles (III) vs Williamsville (VI) Skaneateles may have went into this matchup as the favorite. Their stats were better than Williamsville but the WNYGVIH Inaugural Team had need to be there and to win. The team they defeated for this position would have been defending the NYS Championship. Last year Frontier/Lakeshore/Orchard Park beat Skaneateles to bring the NYS Championship trophy to WNY. Now Williamsville needed to defend it for WNY. On the other side, Skaneateles needed to regain that Championship after having it in 2017 and sharing it in 2014 with Potsdam. In that game, after a four-overtime game that still remained tied, the decision was made to award Co-Champs. Very complicated and very much making for an interesting day. First period ended with a 0-0 tie with Skaneateles Goalie Evie Sheridan stopping 14 SOG and Williamsville’s Elizabeth Timby stopping 9. Second period started out hopping. Williamsville’s Ella Huntley scored an unassisted goal at 11:47 and just after that faceoff Skaneateles’ Megan Teachout scored at 11:16, tying the game. Huntley answered back at 7:03 but the opposition did the same just minutes later with Rebecca Cain tying the game at 2:31. Both teams came out ready for action in the third. Williamsville got back on the board first when Elisabeth Sidorski scored at 13:08 on a powerplay, assisted by Sam Ingham and Ella Huntley. Huntley then scored a shorthanded goal assisted by Erin Roland and Emma Roland. Williamsville is now up 4-2, but not for long. Skaneateles’ Teachout scored an unassisted goal and then Campbell Torrey scored, assisted by Molly Mahoney and Ioanna Christou. The third ended 4-4 and here comes overtime. At 4:18 of overtime Jenna Cavalieri scored, with an assist from Sidorski and Williamsville takes the 2019 NYS Girls Varsity Ice Hockey Regional Championship. Ella Huntley had a hat trick.

NY Hockey OnLine...One Of Top 10 Ice Hockey Magazines And Ezines The Best Ice Hockey Magazines from thousands of Ice Hockey Magazines on the web using search and social metrics. Subscribe to these websites because they are actively working to educate, inspire, and empower their readers with frequent updates and high-quality information. These magazines are ranked based on following criteria Google reputation and Google search ranking Influence and popularity on Facebook, twitter and other social media sites Quality and consistency of posts. Feedspot’s editorial team and expert review

CONGRATULATIONS to every Magazine that has made this Top Ice Hockey Magazines list! This is the most comprehensive list of best Ice Hockey Magazines on the internet and I’m honoured to have you as part of this! I personally give you a high-five and want to thank you for your contribution to this world.https:// blog.feedspot.com/ice_hockey_magazines/ 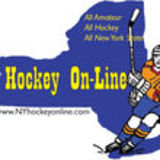