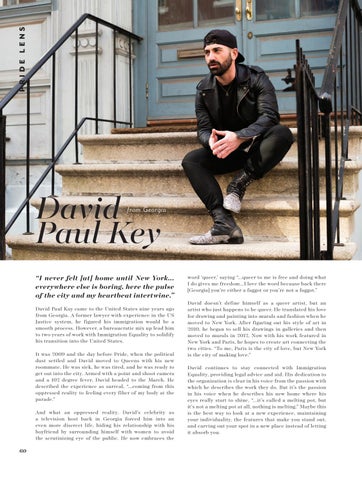 “I never felt [at] home until New York... everywhere else is boring, here the pulse of the city and my heartbeat intertwine.” David Paul Kay came to the United States nine years ago from Georgia. A former lawyer with experience in the US Justice system, he figured his immigration would be a smooth process. However, a bureaucratic mix up lead him to two years of work with Immigration Equality to solidify his transition into the United States. It was 2009 and the day before Pride, when the political dust settled and David moved to Queens with his new roommate. He was sick, he was tired, and he was ready to get out into the city. Armed with a point and shoot camera and a 102 degree fever, David headed to the March. He described the experience as surreal, “...coming from this oppressed reality to feeling every fiber of my body at the parade.” And what an oppressed reality. David’s celebrity as a television host back in Georgia forced him into an even more discreet life, hiding his relationship with his boyfriend by surrounding himself with women to avoid the scrutinizing eye of the public. He now embraces the 60

word ‘queer,’ saying “...queer to me is free and doing what I do gives me freedom...I love the word because back there [Georgia] you’re either a faggot or you’re not a faggot.” David doesn’t define himself as a queer artist, but an artist who just happens to be queer. He translated his love for drawing and painting into murals and fashion when he moved to New York. After figuring out his style of art in 2010, he began to sell his drawings in galleries and then moved to murals in 2012. Now with his work featured in New York and Paris, he hopes to create art connecting the two cities. “To me, Paris is the city of love, but New York is the city of making love.” David continues to stay connected with Immigration Equality, providing legal advice and aid. His dedication to the organization is clear in his voice from the passion with which he describes the work they do. But it’s the passion in his voice when he describes his new home where his eyes really start to shine, “...it’s called a melting pot, but it’s not a melting pot at all, nothing is melting.” Maybe this is the best way to look at a new experience, maintaining your individuality, the features that make you stand out, and carving out your spot in a new place instead of letting it absorb you. 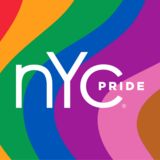