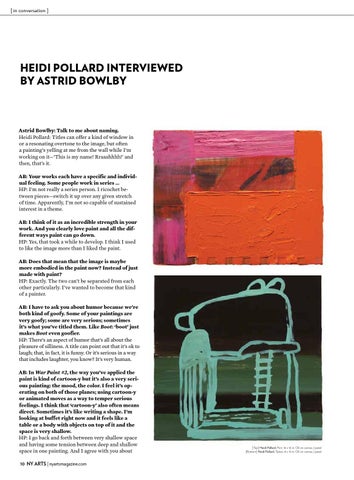 Astrid Bowlby: Talk to me about naming. Heidi Pollard: Titles can offer a kind of window in or a resonating overtone to the image, but often a painting’s yelling at me from the wall while I’m working on it—‘This is my name! Rraaahhhh!’ and then, that’s it. AB: Your works each have a specific and individual feeling. Some people work in series … HP: I’m not really a series person. I ricochet between pieces—switch it up over any given stretch of time. Apparently, I’m not so capable of sustained interest in a theme. AB: I think of it as an incredible strength in your work. And you clearly love paint and all the different ways paint can go down. HP: Yes, that took a while to develop. I think I used to like the image more than I liked the paint. AB: Does that mean that the image is maybe more embodied in the paint now? Instead of just made with paint? HP: Exactly. The two can’t be separated from each other particularly. I’ve wanted to become that kind of a painter. AB: I have to ask you about humor because we’re both kind of goofy. Some of your paintings are very goofy; some are very serious; sometimes it’s what you’ve titled them. Like Boot: ‘boot’ just makes Boot even goofier. HP: There’s an aspect of humor that’s all about the pleasure of silliness. A title can point out that it’s ok to laugh; that, in fact, it is funny. Or it’s serious in a way that includes laughter, you know? It’s very human. AB: In War Paint #2, the way you’ve applied the paint is kind of cartoon-y but it’s also a very serious painting: the mood, the color. I feel it’s operating on both of those planes; using cartoon-y or animated moves as a way to temper serious feelings. I think that ‘cartoon-y’ also often means direct. Sometimes it’s like writing a shape. I’m looking at buffet right now and it feels like a table or a body with objects on top of it and the space is very shallow. HP: I go back and forth between very shallow space and having some tension between deep and shallow space in one painting. And I agree with you about 10 NY ARTS | nyartsmagazine.com

Since its launch in the summer of 1995 as both a print and online publication, NY Arts Magazine has continued to be the fastest growing art portal in New York City. Our mission is to actively promote the understanding and appreciation of contemporary art worldwide. nyartsmagazine.com