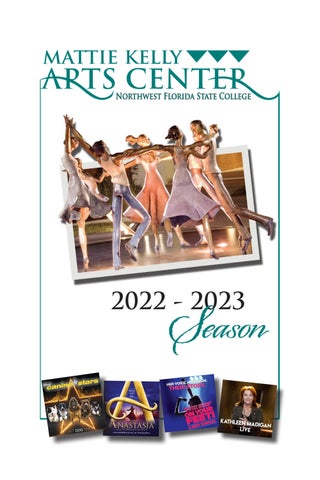 The Canine Stars educational entertainment act features a world-class team of dog trainers and their adopted dogs from the U.S., Canada, Mexico, The Netherlands and South Korea. Touring North America since 2012.

Journey to the past.

The romantic and adventure-filled new musical ANASTASIA is at home in Niceville at last! This dazzling show will transport you from the twilight of the Russian Empire to the euphoria of Paris in the 1920s, as a brave young woman sets out on a journey to discover the mystery of her past.

March 4 7:30 PM Tickets: $35 Under the direction of Moses Pendleton, one of America’s most innovative and widely performed choreographers and directors, MOMIX is recognized internationally for presenting work of exceptional innovation and physical artistry. Pendleton’s latest work takes the audience on a fun adventure with Lewis Carroll’s most beloved character, Alice. The audience is greeted with characters like the Mad Hatter, Queen of Hearts and even the caterpillar through original props, innovative illusions, and inventive choreography.

ON YOUR FEET! is the inspiring true story about heart, heritage and two people who believed in their talent—and each other—to become an international sensation: Gloria and Emilio Estefan. Now their story is an all-new exhilarating original musical winning the hearts of critics and audiences alike. ON YOUR FEET! features some of the most iconic songs of the past quarter-century, including “Rhythm is Gonna Get You,” “Conga,” “Get On Your Feet,” “Don’t Want To Lose You Now,” “1-2-3” and “Coming Out of the Dark.” Prepare to be on your feet from start to finish!

A Tribute to our Heroes

An Invitation to the Dance Michael Cavanaugh

Education Week at the NFSO A Dream of America

Join Alex, Marty, Melman and Gloria as they bound out of the zoo and onto the stage in this live musical spectacular. This smash hit musical features all of your favorite crack-a-lackin’ friends as they escape from their home in New York’s Central Park Zoo and find themselves on an unexpected journey to the madcap world of King Julien’s Madagascar. This brand new musical from Dreamworks (Shrek The Musical) will leave audiences with no choice but to “Move It, Move It!”!

Comedian Kathleen Madigan’s 32-year comedy career is showing no signs of slowing down. Madigan has been touring 250 nights a year on the road and has risen from performing in comedy clubs to performing in marquee theaters with sold out shows. She’s squeezed in over 40 appearances on late night talk shows and multiple comedy specials airing on Netflix, Comedy Central and HBO. She also recently joined Jerry Seinfeld on his Netflix show “Comedians in Cars Getting Coffee” and made the most of the pandemic by launching a podcast, “Madigan’s Pubcast,” on all streaming outlets. Her most recent special “Bothering Jesus” is her fifth hour long standup special and will be her third special to be available on NETFLIX.

2022 - 2023 Family Shows Monday, January 23, 2023 9:45 a.m. and 11:30 a.m. Tickets: $10 When Grace’s teacher reveals that the United States has never had a female president, Grace asks “Where are the girls?”, as her third-grade teacher rolls out a poster of all 44 U.S. presidents. Frustrated by the lack of female faces in the White House, Grace decides she wants to be the first female president. Grace immediately starts off her political career as a candidate and initiates a mock school election. She seems the likely winner until the most popular boy runs against her. In this timely story, the basics of elections, from campaigns to the complexity of the electoral college are explained in a way that is clear and age appropriate. Offers an inspiring example of perseverance, courage, and independent thought of how to choose our leaders. Join Grace and her classmates on a musical theater journey as the classmates discover what it takes to be the best candidate.

Monday, February, 13, 2023 9:45 a.m. and 11:30 a.m. Tickets: $10 Now that Junie B. Jones has been going to school for over one-and a-half years, who better to write the book on EVERYTHING you need to know? From bus rules and Band-Aids to carpools to cookies, Junie B. and friends deliver the definitive word on surviving and thriving in style. With a jillion tips, tricks, and trip-ups, Junie B. shares her hard-won expertise and shows us all how school is sometimes scary, sometimes super-fun, and ALWAYS something to sing about!

Monday, February 28, 2023 9:45 a.m. and 11:30 a.m. Tickets: $10 “Llama Llama Live!”, a new musical by Bay Area Children’s Theatre (BACT) inspired by the bestselling Llama, Llama Red Pajama series of picture books by the late Anna Dewdney. Families can join in the fun when Llama bursts into his bedroom looking frantically for his favorite red pajamas. Mama, hearing the commotion, comes upstairs with Llama’s pajamas in the laundry basket to ask about his day—his very first day at school—and put him to bed. But when she goes downstairs to do the million things that busy mothers have to do at the end of the day, Llama is too wiggly to fall asleep, and besides, he’s thirsty. He howls for Mama to come back up, but she doesn’t arrive. Will she ever return?

Shows are one hour in length. Study guide available upon request. Please contact Suzanne Flood for reservations: (850)729-6065 or flooda2@nwfsc.edu

Former White House Press Secretary Jan 19, 2023 7:30 pm Book Signing 8:00 pm Keynote Speech Mattie Kelly, Mainstage Kayleigh is the former White House Press Secretary, serving in the final year of President Donald Trump’s administration. Prior to working in the White House, Kayleigh worked as the National Press Secretary for the Trump Campaign and formerly the National Spokesperson for the Republican National Committee. Before joining the RNC, Kayleigh worked as a political commentator at CNN and across cable news. Kayleigh graduated from Harvard Law School with a Juris Doctor and Georgetown University School of Foreign Services with a degree in international politics. She also studied politics and international relations at Oxford University, St. Edmunds Hall. Kayleigh is a recipient of the Department of Defense Medal for Distinguished Public Service and the Department of Homeland Security Secretary’s Public Service Award. She is the author of the new book For Such a Time as This: My Faith Journey through the White House and Beyond.

Dr. Benjamin S. Carson, Sr., M.D., is Founder and Chairman of the American Cornerstone Institute, a new think tank / do tank whose mission is to promote the 4 founding principles which are cornerstones of our country: faith, liberty, community and life as well as pursue common sense solutions that challenge conventional groupthink. He most recently served as the 17th Secretary of the U.S. Department of Housing and Urban Development. For nearly 30 years, Secretary Carson served as Director of Pediatric Neurosurgery at the Johns Hopkins Children’s Center. In 1987, he successfully performed the first separation of craniopagus twins conjoined at the back of the head. He also performed the first fully successful separation of type-2 vertical craniopagus twins in 1997 in South Africa. Dr. Carson received dozens of honors and awards in recognition of his achievements including the Presidential Medal of Freedom, the nation’s highest civilian honor.

An Integral Role Ushers are vital to events at the Mainstage Theater, Sprint Theater, Tyler Recital Hall and the NWF State College Amphitheater. They scan tickets, direct patrons to their seats, hand out programs and present a warm welcome to our patrons. Commitments To become an usher, a person must commit to volunteering several times throughout the season, September through July. There are functions ranging from Broadway and Artist Series shows, to outdoor concerts, to morning school shows for students. Volunteers should be able to maintain patience, tact, and diplomacy, and should also be able to take genuine pleasure in greeting an audience and most importantly of all — to serve with a smile. More Information To find out more about becoming a Volunteer Usher, contact the House Manager Suzanne Flood at (850) 729-6065 or email flooda2@nwfsc.edu.

Mattie Kelly Art Center Galleries Mission: MKAC galleries conducts programs to enhance the educational mission of Northwest Florida State College. Serving as a teaching adjunct to the Department of Art within the college’s Division of Fine, Performing Arts, and Humanities, the galleries organize exhibitions by established national and international artists across styles and media. MKAC galleries are a reputed viable cultural asset for the entire campus and its regional community Volunteer: Would you like to learn about the art world? Help MKAC in its mission to inform and educate through art and culture! The galleries have a have a thirty-five piece collection of historic art &amp; artifacts, plus annual exhibition seasons of national artists. We are looking for gallery sitters, docents, object handlers, and more. Please contact the Volunteer coordinator &amp; gallery assistant, Jasmine, at 850-729-6044 or Richar43@nwfsc. edu to learn more. Interview, fingerprinting, and training are required for all volunteers.

Go to www.MattieKellyArtsCenter.org or call the Box Office at Northwest Florida State College 850.729.6000 for tickets.