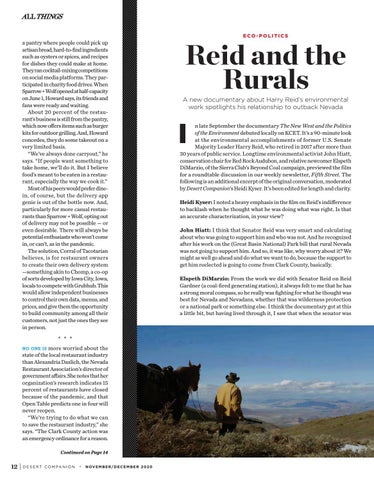 a pantry where people could pick up artisan bread, hard-to-find ingredients such as oysters or spices, and recipes for dishes they could make at home. They ran cocktail-mixing competitions on social media platforms. They participated in charity food drives. When Sparrow + Wolf opened at half-capacity on June 1, Howard says, its friends and fans were ready and waiting. About 20 percent of the restaurant’s business is still from the pantry, which now offers items such as burger kits for outdoor grilling. And, Howard concedes, they do some takeout on a very limited basis. “We’ve always done carryout,” he says. “If people want something to take home, we’ll do it. But I believe food’s meant to be eaten in a restaurant, especially the way we cook it.” Most of his peers would prefer dinein, of course, but the delivery app genie is out of the bottle now. And, particularly for more casual restaurants than Sparrow + Wolf, opting out of delivery may not be possible — or even desirable. There will always be potential enthusiasts who won’t come in, or can’t, as in the pandemic. The solution, Corral of Tacotarian believes, is for restaurant owners to create their own delivery system —something akin to Chomp, a co-op of sorts developed by Iowa City, Iowa, locals to compete with Grubhub. This would allow independent businesses to control their own data, menus, and prices, and give them the opportunity to build community among all their customers, not just the ones they see in person. * * * more worried about the state of the local restaurant industry than Alexandria Dazlich, the Nevada Restaurant Association’s director of government affairs. She notes that her organization’s research indicates 15 percent of restaurants have closed because of the pandemic, and that Open Table predicts one in four will never reopen. “We’re trying to do what we can to save the restaurant industry,” she says. “The Clark County action was an emergency ordinance for a reason.

Reid and the Rurals ECO-POLITICS

n late September the documentary The New West and the Politics of the Environment debuted locally on KCET. It’s a 90-minute look at the environmental accomplishments of former U.S. Senate Majority Leader Harry Reid, who retired in 2017 after more than 30 years of public service. Longtime environmental activist John Hiatt, conservation chair for Red Rock Audubon, and relative newcomer Elspeth DiMarzio, of the Sierra Club’s Beyond Coal campaign, previewed the film for a roundtable discussion in our weekly newsletter, Fifth Street. The following is an additional excerpt of the original conversation, moderated by Desert Companion’s Heidi Kyser. It’s been edited for length and clarity.

Heidi Kyser: I noted a heavy emphasis in the film on Reid’s indifference to backlash when he thought what he was doing what was right. Is that an accurate characterization, in your view? John Hiatt: I think that Senator Reid was very smart and calculating about who was going to support him and who was not. And he recognized after his work on the (Great Basin National) Park bill that rural Nevada was not going to support him. And so, it was like, why worry about it? We might as well go ahead and do what we want to do, because the support to get him reelected is going to come from Clark County, basically. Elspeth DiMarzio: From the work we did with Senator Reid on Reid Gardner (a coal-fired generating station), it always felt to me that he has a strong moral compass, so he really was fighting for what he thought was best for Nevada and Nevadans, whether that was wilderness protection or a national park or something else. I think the documentary got at this a little bit, but having lived through it, I saw that when the senator was

Your guide to living in southern Nevada.