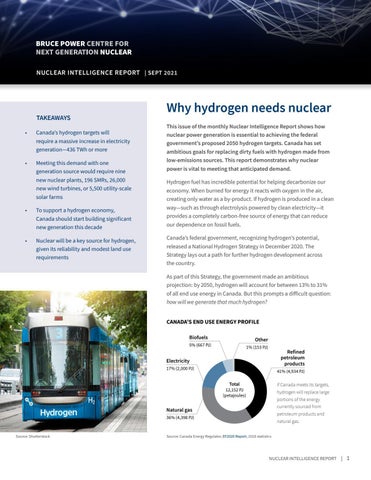 Nuclear will be a key source for hydrogen, given its reliability and modest land use requirements

Why hydrogen needs nuclear This issue of the monthly Nuclear Intelligence Report shows how nuclear power generation is essential to achieving the federal government’s proposed 2050 hydrogen targets. Canada has set ambitious goals for replacing dirty fuels with hydrogen made from low-emissions sources. This report demonstrates why nuclear power is vital to meeting that anticipated demand. Hydrogen fuel has incredible potential for helping decarbonize our economy. When burned for energy it reacts with oxygen in the air, creating only water as a by-product. If hydrogen is produced in a clean way—such as through electrolysis powered by clean electricity—it provides a completely carbon-free source of energy that can reduce our dependence on fossil fuels. Canada’s federal government, recognizing hydrogen’s potential, released a National Hydrogen Strategy in December 2020. The Strategy lays out a path for further hydrogen development across the country. As part of this Strategy, the government made an ambitious projection: by 2050, hydrogen will account for between 13% to 31% of all end use energy in Canada. But this prompts a difficult question: how will we generate that much hydrogen? CANADA’S END USE ENERGY PROFILE Biofuels

If Canada meets its targets, hydrogen will replace large portions of the energy currently sourced from petroleum products and natural gas.

Calculating energy demand There are a number of methods for producing hydrogen. The most common in use today is steam methane reforming, which uses natural gas. But this process is quite carbon intensive. If hydrogen is to be used to decarbonize our economy, it must be produced using a cleaner method. The most common alternative is electrolysis, in which electricity is used to separate water into hydrogen and oxygen. If the electricity is generated from a clean source (such as nuclear, hydro, wind, or solar), then the hydrogen can be completely emissions-free. With help from experts at Strapolec, we calculated the electricity required to meet future hydrogen demand through electrolysis. For our analysis, we benchmarked hydrogen at 18% of energy demand by 2050. Even at this relatively modest level, the new electricity needed for a hydrogen economy is massive:

This volume of demand would require 436 TWh of new generation. For comparison, the entirety of Canada’s electricity demand in 2018 was 648 TWh. So this hydrogen demand would represent an increase of two-thirds, or 67% of current production. Canada is already facing rising electricity demand due to the electrification of vehicles, home heating, and more. The needs of the hydrogen economy will be in addition to that. In short, we’re going to need a lot more electricity.

How much land will it take?

We calculated the options for generating 436 TWh from a single clean generation source, including the number of sites required. The potential land use requirements of wind and solar in particular are significant. For comparison, the entirety of Ontario’s Greenbelt is two million acres—and wind turbines would require more than five times that land mass across the country. Our analysis also included options for hydroelectricity and rooftop solar contributions. Some of this demand might also be met through hydroelectricity or rooftop solar. But given the scale of electricity needed, Canada does not have anything close to the available hydro resources required to meet the whole demand, and more than 6.5 million rooftop solar installations would be needed (70% of all single-family homes in the country).

As these calculations reveal, meeting hydrogen demand will require a portfolio approach to electricity generation. Wind and solar will generate hydrogen when they have surplus power, contributing to the overall market. But their intermittent nature and large land footprint makes them impractical to provide the bulk of the supply. For that, we will need new reliable baseload from nuclear power to anchor the hydrogen market.

To meet the goal, start now These calculations are a thought experiment, not an exact science. Changes in technology, energy use, and hydrogen development will inevitably impact the trajectory of the market. At the Centre for Next Generation Nuclear, we believe it is possible for Canada to reach our net-zero goals, powered in part by our expertise in nuclear energy. The facts here are intimidating. But they are not meant to discourage policymakers, industry, or the public at large with regards to our policy goals. But the results highlight a clear lesson. We are going to need significant new electricity genera­tion to meet the demands of a 2050 hydrogen economy. While the land use requirements make it unrealistic to meet this demand through renewables alone, nuclear power can provide the reliable anchor of baseload power we need as part of a diversified energy mix. Since simply developing appropriate sites for this generation could take years, we must increase the pace of current planning. If we wish to achieve our objectives for a Canadian hydrogen economy, we need to act now. The National Hydrogen Strategy sets a lofty goal—there is no time to waste if we want to meet it.

BRUCE POWER CENTRE FOR NEXT GENERATION NUCLEAR Based within the Nuclear Innovation Institute, the Bruce Power Centre for Next Generation Nuclear nurtures a deeper understanding of the role of nuclear power in developing new energy technologies that can help forge Canada’s path to a net-zero economy. Each month, the Nuclear Intelligence Report explores next-generation nuclear technologies, examining the energy policy and business landscape behind them. Initially operating as a research/think tank, the Centre examines the market and technology challenges facing energy sources such as hydrogen, new nuclear technologies such as small modular reactors and fusion energy. The Centre will also explore opportunities for Bruce Power assets to be optimized and leveraged to maximize the impact they will have on Canada’s clean energy future. www.nii.ca/centre-for-next-generation-nuclear This report was supported by analysis from Strategic Policy Economics (www.strapolec.ca)

This issue of the monthly Nuclear Intelligence Report shows how nuclear power generation is essential to achieving the federal government's proposed 2050 hydrogen targets. Canada has set ambitious goals for replacing dirty fuels with hydrogen made from low-emissions sources. This report demonstrates why nuclear power is vital to meeting that anticipated demand. Each month, the Bruce Power Centre for Next Generation Nuclear explores next-generation nuclear technologies, examining the energy policy and business landscape behind them.