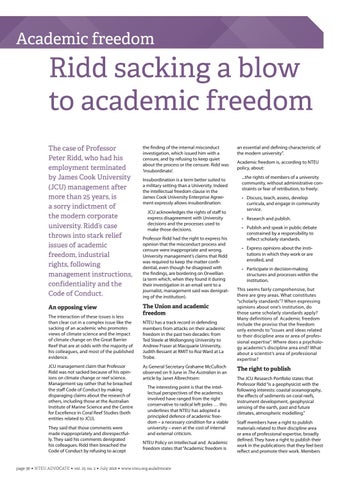 Ridd sacking a blow to academic freedom The case of Professor Peter Ridd, who had his employment terminated by James Cook University (JCU) management after more than 25 years, is a sorry indictment of the modern corporate university. Ridd’s case throws into stark relief issues of academic freedom, industrial rights, following management instructions, confidentiality and the Code of Conduct.

the finding of the internal misconduct investigation, which issued him with a censure, and by refusing to keep quiet about the process or the censure. Ridd was ‘insubordinate’.

The Union and academic freedom

The interaction of these issues is less than clear cut in a complex issue like the sacking of an academic who promotes views of climate science and the impact of climate change on the Great Barrier Reef that are at odds with the majority of his colleagues, and most of the published evidence. JCU management claim that Professor Ridd was not sacked because of his opinions on climate change or reef science. Management say rather that he breached the staff Code of Conduct by making disparaging claims about the research of others, including those at the Australian Institute of Marine Science and the Centre for Excellence in Coral Reef Studies (both entities related to JCU). They said that those comments were made inappropriately and disrespectfully. They said his comments denigrated his colleagues. Ridd then breached the Code of Conduct by refusing to accept

Insubordination is a term better suited to a military setting than a University. Indeed the intellectual freedom clause in the James Cook University Enterprise Agreement expressly allows insubordination: JCU acknowledges the rights of staff to express disagreement with University decisions and the processes used to make those decisions. Professor Ridd had the right to express his opinion that the misconduct process and censure were inappropriate and wrong. University management’s claims that Ridd was required to keep the matter confidential, even though he disagreed with the findings, are bordering on Orwellian (a term which, when they found it during their investigation in an email sent to a journalist, management said was denigrating of the institution).

NTEU has a track record in defending members from attacks on their academic freedom in the past two decades: from Ted Steele at Wollongong University to Andrew Fraser at Macquarie University, Judith Bessant at RMIT to Roz Ward at La Trobe. As General Secretary Grahame McCulloch observed on 9 June in The Australian in an article by Janet Albrechtsen: The interesting point is that the intellectual perspectives of the academics involved have ranged from the right conservative to radical left poles … this underlines that NTEU has adopted a principled defence of academic freedom – a necessary condition for a viable university – even at the cost of internal and external criticism. NTEU Policy on Intellectual and Academic freedom states that “Academic freedom is

an essential and defining characteristic of the modern university”. Academic freedom is, according to NTEU policy, about: ...the rights of members of a university community, without administrative constraints or fear of retribution, to freely: • Discuss, teach, assess, develop curricula, and engage in community service. • Research and publish. • P ublish and speak in public debate constrained by a responsibility to reflect scholarly standards. • E xpress opinions about the institutions in which they work or are enrolled, and • P articipate in decision-making structures and processes within the institution. This seems fairly comprehensive, but there are grey areas. What constitutes “scholarly standards”? When expressing opinions about one’s institution, do those same scholarly standards apply? Many definitions of Academic freedom include the proviso that the freedom only extends to “issues and ideas related to their discipline area or area of professional expertise”. Where does a psychology academic’s discipline area end? What about a scientist’s area of professional expertise?

The right to publish The JCU Research Portfolio states that Professor Ridd “is a geophysicist with the following interests: coastal oceanography, the effects of sediments on coral reefs, instrument development, geophysical sensing of the earth, past and future climates, atmospheric modelling.” Staff members have a right to publish materials related to their discipline area or area of professional expertise, broadly defined. They have a right to publish their work in the publications that they feel best reflect and promote their work. Members 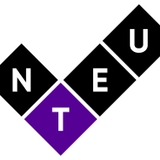