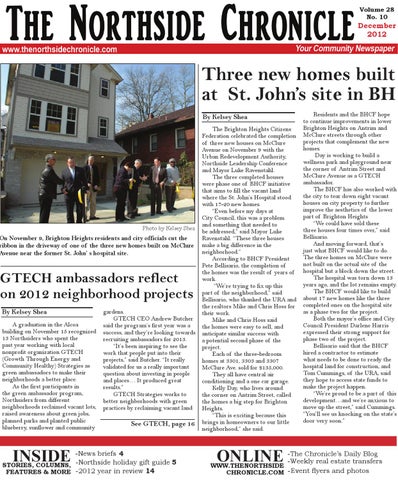 On November 9, Brighton Heights residents and city officials cut the ribbon in the driveway of one of the three new homes built on McClure Avenue near the former St. John’ s hospital site.

GTECH ambassadors reflect on 2012 neighborhood projects By Kelsey Shea A graduation in the Alcoa building on November 15 recognized 13 Northsiders who spent the past year working with local nonprofit organization GTECH (Growth Through Energy and Community Healthy) Strategies as green ambassadors to make their neighborhoods a better place. As the first participants in the green ambassador program, Northsiders from different neighborhoods reclaimed vacant lots, raised awareness about green jobs, planned parks and planted public blueberry, sunflower and community

gardens. GTECH CEO Andrew Butcher said the program’s first year was a success, and they’re looking towards recruiting ambassadors for 2013. “It’s been inspiring to see the work that people put into their projects,” said Butcher. “It really validated for us a really important question about investing in people and places… It produced great results.” GTECH Strategies works to better neighborhoods with green practices by reclaiming vacant land

The Brighton Heights Citizens Federation celebrated the completion of three new houses on McClure Avenue on November 9 with the Urban Redevelopment Authority, Northside Leadership Conference and Mayor Luke Ravenstahl. The three completed houses were phase one of BHCF initiative that aims to fill the vacant land where the St. John’s Hospital stood with 17-20 new homes. “Even before my days at City Council, this was a problem and something that needed to be addressed,” said Mayor Luke Ravenstahl. “These three houses make a big difference in the neighborhood.” According to BHCF President Pete Bellisario, the completion of the homes was the result of years of work. “We’re trying to fix up this part of the neighborhood,” said Bellisario, who thanked the URA and the realtors Mike and Chris Hoss for their work. Mike and Chris Hoss said the homes were easy to sell, and anticipate similar success with a potential second phase of the project. Each of the three-bedroom homes at 3301, 3303 and 3307 McClure Ave. sold for $135,000. They all have central air conditioning and a one car garage. Kelly Day, who lives around the corner on Antrim Street, called the homes a big step for Brighton Heights. “This is exciting because this brings in homeowners to our little neighborhood,” she said.

Residents and the BHCF hope to continue improvements in lower Brighton Heights on Antrim and McClure streets through other projects that complement the new homes. Day is working to build a wellness park and playground near the corner of Antrim Street and McClure Avenue as a GTECH ambassador. The BHCF has also worked with the city to tear down eight vacant houses on city property to further improve the aesthetics of the lower part of Brighton Heights “We could have sold these three houses four times over,” said Bellisario. And moving forward, that’s just what BHCF would like to do. The three homes on McClure were not built on the actual site of the hospital but a block down the street. The hospital was torn down 13 years ago, and the lot remains empty. The BHCF would like to build about 17 new homes like the three completed ones on the hospital site as a phase two for the project. Both the mayor’s office and City Council President Darlene Harris expressed their strong support for phase two of the project. Bellisario said that the BHCF hired a contractor to estimate what needs to be done to ready the hospital land for construction, and Tom Cummings, of the URA, said they hope to access state funds to make the project happen. “We’re proud to be a part of this development…and we’re anxious to move up the street,” said Cummings. “You’ll see us knocking on the state’s door very soon.”

December 2012 issue of The Northside Chronicle