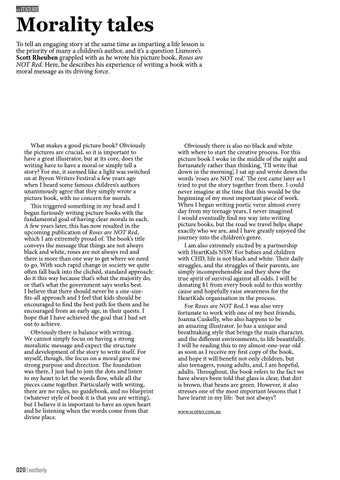 Morality tales To tell an engaging story at the same time as imparting a life lesson is the priority of many a children’s author, and it’s a question Lismore’s Scott Rheuben grappled with as he wrote his picture book, Roses are NOT Red. Here, he describes his experience of writing a book with a moral message as its driving force.

What makes a good picture book? Obviously the pictures are crucial, so it is important to have a great illustrator, but at its core, does the writing have to have a moral or simply tell a story? For me, it seemed like a light was switched on at Byron Writers Festival a few years ago when I heard some famous children’s authors unanimously agree that they simply wrote a picture book, with no concern for morals. This triggered something in my head and I began furiously writing picture books with the fundamental goal of having clear morals in each. A few years later, this has now resulted in the upcoming publication of Roses are NOT Red, which I am extremely proud of. The book’s title conveys the message that things are not always black and white, roses are not always red and there is more than one way to get where we need to go. With such rapid change in society we quite often fall back into the clichéd, standard approach: do it this way because that’s what the majority do, or that’s what the government says works best. I believe that there should never be a one-sizefits-all approach and I feel that kids should be encouraged to find the best path for them and be encouraged from an early age, in their quests. I hope that I have achieved the goal that I had set out to achieve. Obviously there is balance with writing. We cannot simply focus on having a strong moralistic message and expect the structure and development of the story to write itself. For myself, though, the focus on a moral gave me strong purpose and direction. The foundation was there, I just had to join the dots and listen to my heart to let the words flow, while all the pieces came together. Particularly with writing, there are no rules, no guidebook, and no blueprint (whatever style of book it is that you are writing), but I believe it is important to have an open heart and be listening when the words come from that divine place.

Obviously there is also no black and white with where to start the creative process. For this picture book I woke in the middle of the night and fortunately rather than thinking, ‘I’ll write that down in the morning’, I sat up and wrote down the words ‘roses are NOT red.’ The rest came later as I tried to put the story together from there. I could never imagine at the time that this would be the beginning of my most important piece of work. When I began writing poetic verse almost every day from my teenage years, I never imagined I would eventually find my way into writing picture books, but the road we travel helps shape exactly who we are, and I have greatly enjoyed the journey into the children’s genre. I am also extremely excited by a partnership with HeartKids NSW. For babies and children with CHD, life is not black and white. Their daily struggles, and the struggles of their parents, are simply incomprehensible and they show the true spirit of survival against all odds. I will be donating $1 from every book sold to this worthy cause and hopefully raise awareness for the HeartKids organisation in the process. For Roses are NOT Red, I was also very fortunate to work with one of my best friends, Joanna Cuskelly, who also happens to be an amazing illustrator. Jo has a unique and breathtaking style that brings the main character, and the different environments, to life beautifully. I will be reading this to my almost-one-year-old as soon as I receive my first copy of the book, and hope it will benefit not only children, but also teenagers, young adults, and, I am hopeful, adults. Throughout, the book refers to the fact we have always been told that glass is clear, that dirt is brown, that beans are green. However, it also stresses one of the most important lessons that I have learnt in my life: ‘but not always’! www.scotter.com.au 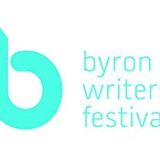